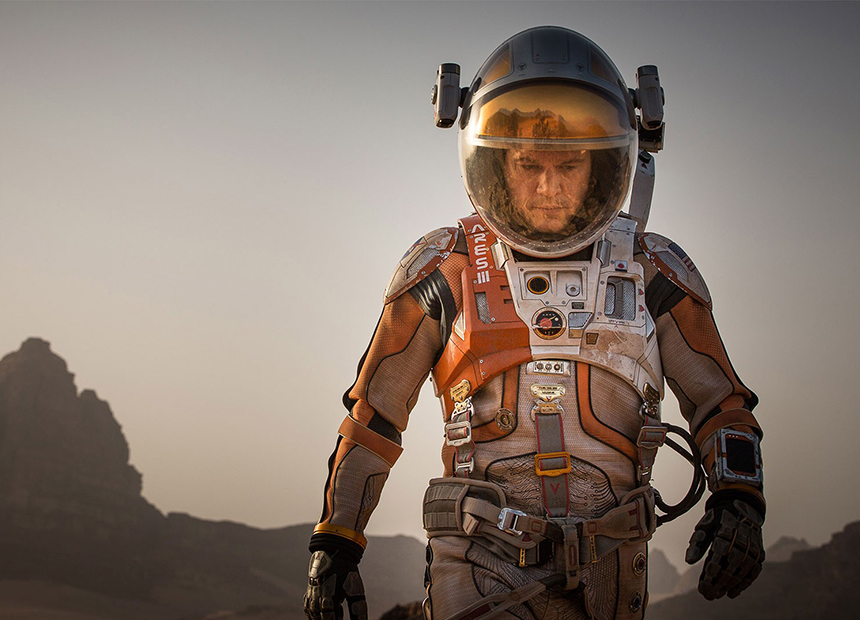 As far as publicity stunts go, Ridley Scott and his PR team might just have orchestrated the greatest one yet.

Timing the release of a movie about life on Mars with the official discovery of water on Mars? Genius.

Okay, so it wasn’t intentional but the happy coincidence just checks yet another box in a movie that is a bona fide crowd pleaser.

The Martian is essentially what all movies should be – a well-rounded, entertaining ride from start to finish. The love child of Gravity and Castaway.

Based on Andy Weir’s 2011 novel of the same name, the movie stars oft-parodied but much-loved Matt Damon as Mark Watney, a NASA astronaut and botanist accidentally left behind on a manned mission to Mars.

Presumed dead, he is left to survive on a planet where survival is next to impossible.

As Watney himself puts it, he has to “science the s**t out of it”.

This one-man struggle would have made for a great movie on its own thanks to Damon’s emotional range and acerbic wit.

Thankfully, though, the movie doesn’t just dwell on the red planet but rather throws back to NASA’s headquarters, where the revelation that Watney is still alive creates astrophysical chaos, and to the spaceship where Watney’s colleagues carry out their mission, unaware they’ve condemned their friend to a death sentence unnecessarily.

It’s all set to a fabulous retro disco soundtrack (don’t ask) and – surprisingly – there are plenty of laughs to be had. Some tears too.

The ensemble cast is suitably mixed, with a focus on appealing to every generation and sensibility.

There’s everyone from Jeff Daniels, star of The Newsroom and pretty much every 80s movie ever, as the impenetrable chief of NASA, to perennially on-the-pulse rapper and comedian, Donald Glover (aka Childish Gambino) as a lackadaisical astrodynamicist – if there even is such a thing.

There’s even Kristen Wiig failing to be serious thrown in there for good measure. (Seriously, we must be so conditioned to laugh at Wiig that even her being sad or stressed seems funny). Game of Thrones‘ Ned Stark (aka Sean Bean) stars too.

And as for the all-important science stuff? Real-life astronaut Clayton C. Anderson, who reviewed the film for Quartz, admitted that, while there were a few technical glitches, it was pretty spot on in its depiction of space, NASA and everything in between.

This may be because Scott worked closely with the agency to get the film made, a quality that shows in the execution of more complicated engineering scenes. This is smart people mumbo jumbo that actually makes sense.

“For me, the highlight was the film’s refreshing and inspiring depiction of NASA,” Anderson said of the film.

“I’m not talking about physical depictions mind you (the Vertical Assembly Building does not reside at the Johnson Space Center) but instead the film’s sense of an ever-present drive on the part of NASA employees to pull together to win the day, even in the midst of seemingly insurmountable odds.”

He’s right – the camaraderie of the characters in the film is authentic, inspiring and uplifting. You’ll likely catch yourself openly beaming up at the screen in certain moments and wishing you’d studied astrophysics instead of your arts degree.

Clever, hilarious and heartfelt, The Martian is as overachieving as the astronauts it showcases.

If this is what space travel feels like then beam us up, Scotty.