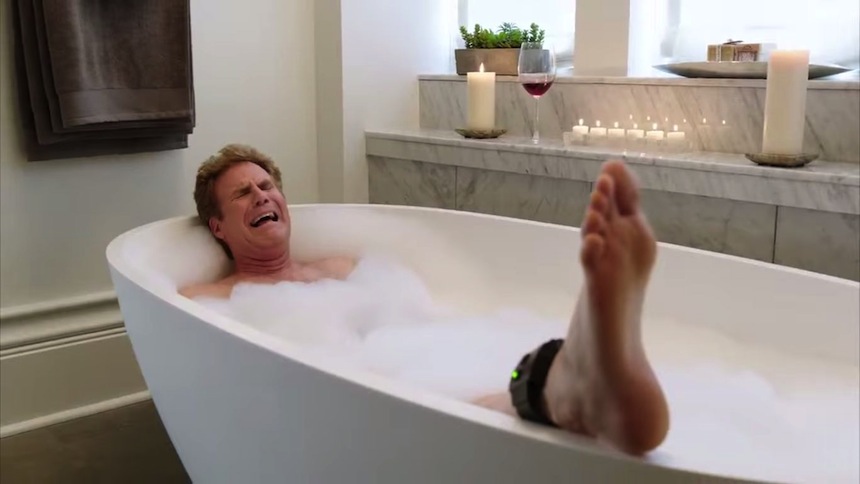 “Some of the ugliest gay-panic humor to befoul a studio release in recent memory.”

That is how industry bible Variety described Will Ferrell and Kevin Hart’s new comedy Get Hard.

“Racist as f**k,” was the slightly less eloquent verdict from one audience member at a SXSW Festival screening of the Etan Cohen flick earlier this month.

• Out of Focus: Margot Robbie’s rookie error
• Why 2015 could be the best year for movies … ever! Neither appraisal is wrong. Get Hard tells the story of James King (Ferrell), a wimpy white collar banker who is charged with fraud and sentenced to 10 years in maximum-security prison, San Quentin.

To increase his chances of survival while in the big house, he enlists the help of down-on-his-luck car wash owner Darnell Lewis (Hart), whom he assumes has spent time in jail thanks to racial profiling.

Unbeknownst to King, Lewis is one of those “rare” black men who has not spent time behind bars, and the ensuing chaos as Lewis bluffs his way through a prison crash course is the basis for most of the movie.

Essentially, the entire movie is about tactics for avoiding gay sex in prison. The main dynamic between the two protagonists is a study in racial stereotyping and socio-economic disparity. It’s far from PC at the best of times.

The problem is, you’re going to laugh. And you’re not going to be able to help yourself.

That’s not to say Get Hard doesn’t have its shortcomings. Plenty of them, in fact.

Secondly, despite its valiant effort to smash stereotypes, watching Hart and Ferrell attempt to grapple with the big issues is akin to watching two ants trying to lift a rock five times their size.

As far as we’ve come, race, homosexuality and sexual violence are hardly ideal fodder for careless comedy. Especially when you find yourself watching an alarmingly violent initiation ceremony into a white supremacy group. Or a reasonably graphic oral sex scene in a bathroom.

BUT – and this is a big but – the chemistry between the indefatigable Hart and Ferrell as his loping, idiotic student is effortless and difficult to resist.

Despite your better judgement, you’re going to fail to suppress a giggle or two when Hart is impersonating the different inhabitants of a prison yard, or when Ferrell does a bizarre yet brilliant duet with John Mayer.

Both men are to be applauded for their physical comedy prowess – it’s what carries Get Hard over the line.

What’s more, it’s easy to forget there’s a reason Ferrell is often hailed as comedy gold – able to bridge the gap between Gen Y and, well, his age group (he’s 47, a good 15 years older than counterparts like Seth Rogen).

After the success of the first Anchorman film and Zoolander, he has flown relatively under the radar with halfhearted efforts like The Campaign and Anchorman 2.

Is Get Hard Ferrell’s big comeback? No. But it proves he’s still here and still relevant, which is an achievement in these transient times.

For those who are easily offended, perhaps steer clear of Get Hard, if only to protect yourself from the countless references to kiestering (Google it. Or don’t).

For the rest of you, it’s fair to say Get Hard is not going to make you a better person.

Then again, if you’re seeing a movie which has a blatant sexual pun as a title, you’re probably a lost cause anyway. Enjoy.

‘Homophobic, racist’: is ‘Get Hard’ worth it?