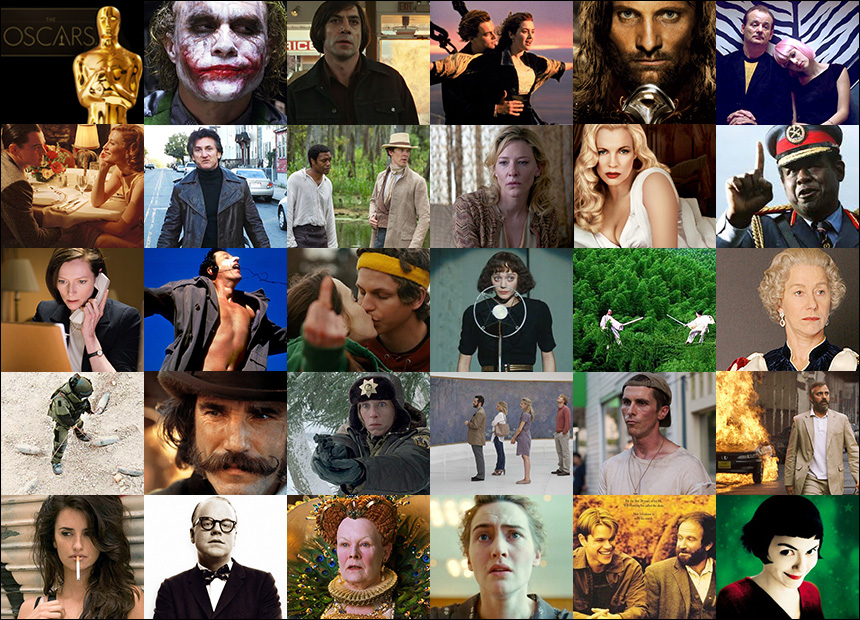 Looking back over the past 20 years of Oscar winners – from the award ceremonies of 1995 through to 2014 – reminds us how hard it is for The Academy to get it right year in, year out.

• The Oscars 2015: our top tips revealed
• Stan, Presto and Quickflix: which one is best?
• Cool: Richard Linklater’s road to Oscar glory

There have been some magnificent films and performances in that time, as well as some odd choices for best picture winner: Shakespeare in Love?

With the 2015 winners set to be announced on Monday Australian time, we decided to look back at the past two decades of major award winners to find the best of the best – the Oscars’ Oscars.

Then we turned the list over to critic Patrick James to choose the best in each category. The envelope please…

There are difficult choices here as so few of the Best Picture nominees appear ‘great’ a few years after their release (Chicago, Forrest Gump and Crash to name a few).

An unflinching depiction of Solomon Northrop’s (Chiwetel Ejiofor) life as a plantation slave in Louisiana during the 1840’s, 12 Years A Slave was an unlikely choice for Best Picture.

Illustrating the brutality, humiliation and inhumanity of the life of slave, it was unlike the typical, escapist confection generally associated with Hollywood – it was preceded by Argo, The Artist and The King’s Speech in the 2010s.

Twelve Years a Slave was the first mainstream Hollywood film to tackle the dark history of slavery and its win marked a significant cultural moment in the United States.

See a clip of the film here.

Other Best Film winners in the past 20 years included:

The Coen Brothers (2008) No Country for Old Men

Each director on this list has an impressive backlog of credits, but Ang Lee has shown himself to be truly versatile in tackling wildly different subject matter.

Brokeback Mountain is steeped in the lore of American working class as the doomed love story of two gay ranchmen of the American west.

With Heath Ledger and Jake Gyllenhaal putting in breathtaking performances, Lee brings graceful rendering of his story and deep sensitivity to his characters.

Watch a clip from the film here.

Other Best Directors from the past 20 years:

Winner: Daniel Day Lewis (2008) There Will be Blood

Daniel Day-Lewis, a three-time Oscar winner, brings a full blooded intensity to the part of Daniel Plainview, the rapacious oil prospector who can barely contain his disgust at the world.

Lurking just beneath the surface of his salesman’s persona is the constant threat of violence – something that explodes to life in the film’s incredible final scene – where the wretched Plainview finally loses his soul.

Even if you subscribe to the belief that Day-Lewis’ recent roles, such as Lincoln, are made for Oscar glory, it is an incredible performance, from an incredible actor – one that makes full use of his formidable talent.

Watch a clip from his performance here.

Other Best Actor Nominees from the past 20 years:

The film that introduced French actress Marion Cotillard to the wider world and the role that kick started her path to becoming the best actress in world cinema.

Cotillard transforms completely into the role of famed singer Edith Piaf, flawlessly capturing her personality at every stage of her life – as a bratty street kid, as the tempestuous and fiery superstar and as the frail elderly woman racked with illness.

Cotillard was truly humbled when she won, beating out Cate Blanchett for Elizabeth: The Golden Age, giving one of the most emotional speeches in recent memory.

Watch her in full flight in the role here.

Other Best Actress winners from the past 20 years:

Tilda Swinton has made a career out of appearing in wildly different and experimental films, so it is ironic that her best performance comes from playing a corporate everywoman in Michael Clayton.

She plays the pharmaceutical executive, way in over head trying to handle a renegade lawyer – her polished, ultra composed exterior concealing her intense self doubt and anxiety as she moves towards personal and professional disaster.

Here’s a clip of Swinton in the trailer for the film here.

Other Best Supporting Actress nominees from the past 20 years:

The death of Australian star Heath Ledger cast a shadow over The Dark Knight upon its release in 2008 and the film showcased an amazing final performance by the Australian star.

With his off-kilter voice and sloppy make up and scarring, Ledger is unrecognisable as ‘The Joker’, tearing up the screen with explosive intensity in every scene he appears.

Perhaps one of the greatest performances of all time, all the more remarkable for having emerged from a superhero movie, it was a bittersweet end to the actor’s career – he died a year before his Oscar win was announced.

Watch him in action here.

Other Best Supporting Actor winners from the past 20 years:

German political thriller The Lives of Others, set in the world of 1980’s Berlin, was hailed a ‘masterpiece’ when it was released in 2006 and won the Oscar for Best Foreign Language Film in early 2007.

A cynical political operative is sent to spy on a playwright and his girlfriend, but is improbably moved by the couple’s idealism and begins to protect them from the state authorities he works for.

Although set in a very particular time and place, The Lives of Others tells a moving, universal story.

Watch a scene from the film here.

Other Best Foreign Language film winners from the past 20 years:

A down on his luck car salesman (William H Macy) arranges the kidnapping of his wife in order to secure ransom from her wealthy father – but the plan gets botched, introducing a determined and heavily pregnant detective (Frances McDormand) onto the case, before more and more disaster strikes for everyone.

Fargo combines the Coen brothers’ flair for thriller noir films with off beat humour about small town America and is arguably their best ever film.

Watch a clip of the film here.

Other Best Original Screenplay winners from the past 20 years:

(This article has been corrected. Amelie did not win an Oscar for Best Foreign Film.)

The Oscars’ Oscars: Best cinema of the past 20 years