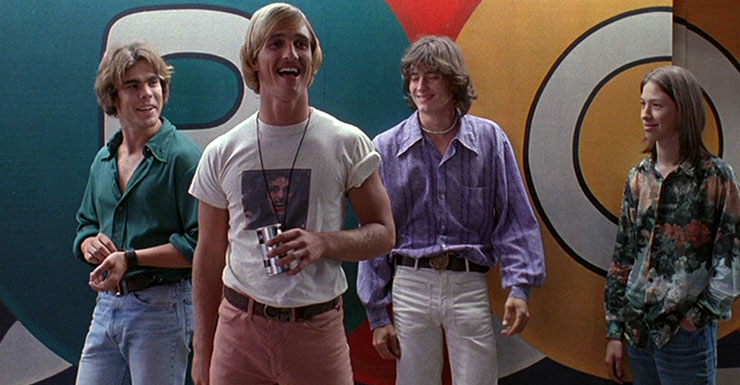 Having already picked up gongs at the Golden Globes and BAFTAs for Boyhood, the movie, shot over 12 years and starring Ethan Hawke and Patricia Arquette, is the hands-down favourite to win Best Picture at the Oscars on February 22.

Mainstream appreciation has been a long time coming for Linklater, a director who has forged a career making indie flicks close to his heart.

• BAFTAs point to Oscar wins for ‘Boyhood’
• Is ‘Boyhood’ the movie of the year?

His roll call of movies includes the teen cult hit Dazed and Confused (1993), the film that launched the career of Matthew McConaughey, the exquisite Before Sunrise in 1995, again starring Hawke with Julie Delpy, and School of Rock, his first of two collaborations with comedian Jack Black.

If you weren’t aware Linklater directed that last film, join the club. His career is as diverse as his path to success.

Raised by his single mother in Huntsville, Texas, Linklater, a self-taught filmmaker, has always been an outsider in the world of American cinema.

After coming to prominence with 1991’s Slacker, Linklater avoided the Hollywood machine, claiming he’s “always been most interested in the politics of everyday life” it’s an approach that has been reflected in his stream of small-scale independent films that embrace the best of classic European cinema (with the occasional mainstream kids movie for good measure).

His approach inspires admiration from his collaborators with Hollywood stars McConaughey, Hawke and Black all appearing in several of his films, each remaining intensely loyal to ‘Rick’.

Linklater himself jokes at the amount of times he has been “kicked out” of the industry.

But this distance from Hollywood has allowed Linklater to carve out a niche to direct daring and ambitious films that explore big themes of love, family and the passage of time.

Here we take a look back at some of his greatest achievements to date: Echoing the approach he would later use in Boyhood the ‘Before’ series explores the changing dynamics of the relationship of Jesse (Ethan Hawke) and Celine (Julie Delpy) over the course of 20 years – each film picking up the couple at different stages of their lives. In Before Sunrise, Jessie and Celine meet and share a romantic evening through the streets of Vienna, waxing philosophical on their dreams and futures before agreeing to meet back at the station six months later without exchanging telephone numbers. One of Linklater’s rare forays into the mainstream, School of Rock is a kids movie that manages to be totally badass. A down-on-his-luck rocker, Dewey Finn (Jack Black), poses as a substitute teacher at a prestigious prep school. As well as upending the entire curriculum, he also teaches the kids the glory of rock’n’roll. With the principal and their parents none the wiser, he forms a giant class band and they try to win a battle of the bands competition. At the time of its release, Before Sunset was seen as an unexpected sequel to Before Sunrise, but has grown to be regarded as one of the most romantic films ever made. Nine years after the original, Jessie and Celine meet again at a Paris bookstore. This time, both are more adult and living with greater responsibility. Playing out in real time, the pair stroll through the streets of Paris and slowly their hardened exteriors begin to thaw as romance blooms on a gauzy summer afternoon. An unconventional biography pic that re-imagines the glamour years of the New York theatre. It’s 1937 and theatre-loving teenager Richard Samuels (Zac Efron) dreams come true when he is hired for a small part in Orson Welles production of Julius Caesar. Overwhelmed and out his depth, the mild-mannered Richard tries to navigate his heady new world without incurring the wrath of Welles (Christian McKay) who commands the production with a volcanic temper and mercurial style. After a time, Richard slowly wins the attention of a lovely production assistant Sonja (Claire Daines), but his success is short lived as he is drawn into an inevitable confrontation with the irascible megastar. Offbeat black comedy based on the bizarre true story of Bernie Tiede (Jack Black), a popular local mortician in East Carthage Texas who befriends Marjorie Nugent (Shirley MacLaine), a wealthy widow who is despised by the local community. Eventually, Bernie and Marjorie become inseparable, enjoying the high life together. However, Bernie grows exhausted from the emotional toll of their friendship and murders her in retaliation for her emotional putdowns. After her body is discovered, the D.A (Matthew McConaughey) looks to prosecute but is stifled as local support rallies for the beloved Bernie. Set nine years after the events of Before Sunset, Before Midnight sees Jessie and Celine now married with twins. Whilst on a six-week holiday in the Greek Islands, they are given a romantic evening away at a luxury hotel. With some time alone, the pair enjoy a brief moment of bliss before descending into a fiery argument on the state of their marriage and the frustrations of their domestic situation. Nominated for an Academy Award for its screenplay, the highly naturalistic approach to the drama was seen as one of the most realistic explorations of marriage ever depicted on film. Frontrunner for this year’s Best Picture Oscar and already hailed as Linklater’s ‘masterpiece’, Boyhood depicts the coming of age of Mason (Ellar Coltrane), a kid growing up in suburban Texas. The film spans Mason’s journey from childhood to his leaving for college as an adult. In a novel and ambitious approach, Linklater filmed Boyhood one week a year for 12 years, charting the gradual physical transformation of actor Ellar Coltrane. Boyhood approaches the business of growing up entirely from Mason’s perspective, taking meandering true-to-life episodes from each year of Mason’s life as he gradually comes into adulthood, while navigating the changing family dynamic as his parents (Patricia Arquette and Ethan Hawke) struggle to manage their own lives. The drama, conflict and humour all stem from real life situations, giving Boyhood its unique and profound power.