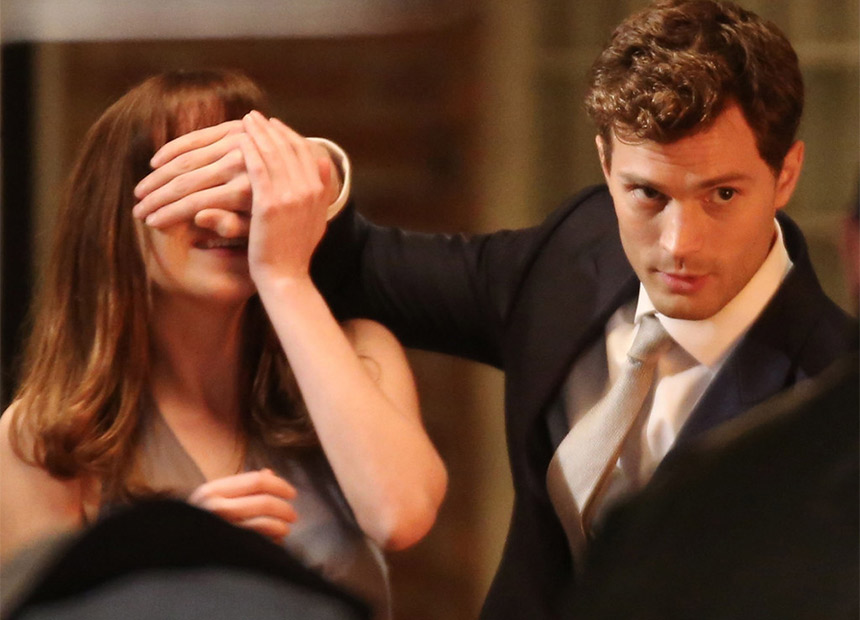 Men of Australia, I have returned to you to report: Fifty Shades of Grey is not sexy, it’s not very good, hell it’s not even a functional film … but it is kind of fascinating.

As the women of Australia collectively bugger off to the cinema. At least that’s the line the publicists are spinning as we hear that “20,000 women will attend” the first screenings of Fifty Shades – marking the beginning of a tie-me-up tsunami that will swiftly follow suit.

But what about the other 11.5 million Australians? Should guys – or more accurately, those of any gender who resisted the book and its zeitgeisty allure – gleefully or grudgingly head out on a film date? Or should they slip the knots, run from the playroom and shout “red, red, red!” at the top of their lungs?

Frankly, the answer essentially comes down to whether you want to understand that last sentence.

Let’s start with some basics. Fifty Shades of Grey is less sexy as a film than Caravan of Courage: An Ewok Adventure. Sure Dakota Johnson spends less time with a top on than she does demonstrating any kind of personality (hint: not very much at all), but they are some sexless boobs, despite the fact that she, and they, are having a lot of sex. It’s not a matter of being PC or prudish – heck this is some pretty vanilla nudity and S&M – it’s just incredibly clinical. The sex scenes could have been narrated by Sir David Attenborough and been more erotic.

For the first 45 minutes, before the famous sex stuff starts, Johnson’s character Anastasia is a dud. We know nothing about this girl. She studies English Literature. She works in a hardware store. She trips over invisible objects. That’s about it. Her personality is as much of a virgin as she is. Christian says at one point he’s not into necrophilia. Well being attracted to what we see of Anastasia is only one step away from it.

She’s such a nobody that it’s easy to presume that this is a modern Cinderella story. Sort of a reverse Pretty Woman. It’s only once she starts negotiating with Christian the equally personality-challenged zillionaire over their S&M contract – oh yes, that’s the plot line here – that it becomes clear that the fairytale being twisted here is Beauty and the Beast.

Only it doesn’t actually finish the story. We get a first act where the pair meet and are attracted to each other because the script says so, which is spankingly awful. Then the second act begins as she realises what he’s into – which is spanking – and they start a lengthy negotiation that is at face value about whether she will submit, but really about who will change for who. It’s not bad at all. Oddly fascinating. It’s an interesting exploration of the psychology of why someone might agree. What doubts might arise.

Then … the film ends. Only it forgets the third act. There is no resolution.

So why see it? Because like the pre-pubescent boy who still flicked through the Playboy he found by chance: you’re curious. It won’t titillate you. You don’t really get it. It’s not about finishing. You just don’t want to not see.

The film tries to ask how a “normal” girl might choose to do this. It ponders why someone like Grey would ask her to. These are interesting questions. Secretary is a film that answers them a lot better, but it’s nowhere near as famous. This is the only film that can possibly help with your fifty shades of pop culture confusion.

So guys, it’s ok to watch Fifty Shades. And then let’s never speak of this again.