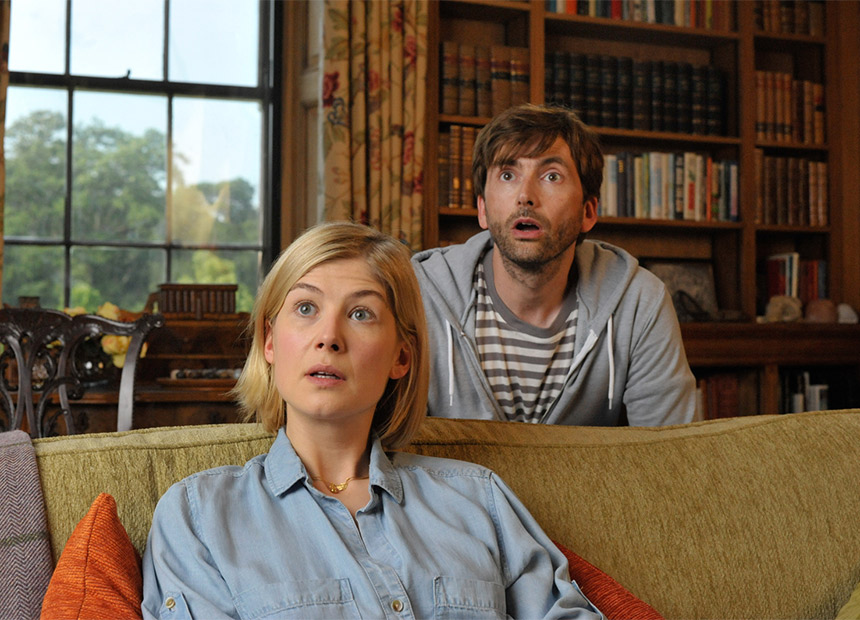 Don’t be fooled by the feelgood trailer, or the winsome poster showing adults smiling indulgently while kids frolic on a beach. This is an eccentric black comedy whose hilarity springs from a place both audacious and earnest.

To avoid upsetting the dying man, Doug and Abi have decided to conceal their impending divorce. But getting their three kids – anxious, bookish Lottie (Emilia Jones), Viking enthusiast Mickey (Bobby Smalldridge) and tiny kleptomaniac Jess (Harriet Turnbull) – to play along with the charade is harder than expected. And when the kids head off to the beach with their free-spirited grandpa, events take an unexpectedly incendiary turn.

British comedians Andy Hamilton and Guy Jenkin, who co-wrote and co-directed this film, are geniuses at wringing fresh laughs from ostensibly tired, stodgy genres. With BBC’s Outnumbered, they turned the family sitcom genre into a low-key satire on parent-child bargaining, with characters that felt recognisably true to life rather than being comic caricatures.

Here, they’re working within the genre of the family reunion dramedy, which is so often mawkish and wishy-washy. But What We Did On Our Holiday is much more like Death at a Funeral than last year’s dreary This Is Where I Leave You.

There’s a certain melancholy in seeing the impish Connolly, who’s suffering from Parkinson’s disease, playing an old man reconciling himself to death. The film doesn’t shrink from Gordie’s suffering, which he in turn carefully conceals from his children and grandchildren. However, the patriarch’s playful spirit permeates the entire film, as his family finds unexpected ways to honour his wish that they enjoy life and get along with each other. Connolly is wonderfully wry in a performance that’ll please his longtime fans.

Anyone who’s spent much time with kids will also recognise the often weird and infuriating but still thoughtful and legitimate ways they process the world. Many of the most hilarious moments here spring from the futile attempts of adults to assert their authority over recalcitrant kids.

This is something of a speciality for these writer/directors – and What We Did On Our Holiday is at its smartest when it sides with its youngest characters, to whom the adults’ fights seem much more petty and childish. The deadpan child actors are a joy; I especially loved Mickey’s earnest belief that the Norse god Odin will come to his grandfather’s birthday party.

The rest of the cast are great, too. Particularly, Pike – last seen onscreen as the sociopathic wife in crime thriller Gone Girl – dials down her trademark iciness in a more sympathetic role; Miller has fun with Gavin’s uptight rage; and Bullmore revels in some wonderful slapstick late in the film as the downtrodden Margaret reveals her secrets.

What We Did On Our Holiday is that rare beast in cinema today – a genuinely, hilariously edgy film the whole family can enjoy. I’ve been warmly recommending it to everyone I know.

‘What We Did On Our Holiday’ a rollicking hit