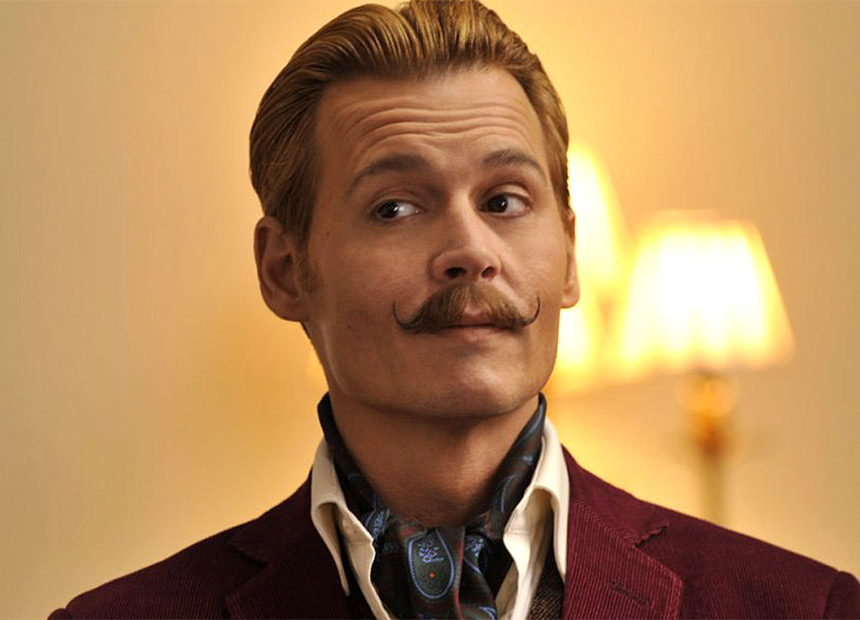 Oh Johnny, where did it all go wrong? You used to be so cool – the alternative, rocker-style actor with a knack for choosing the quirkiest of flicks that pleased both the awkward outsiders and the mainstream moviegoers.

From Edward Scissorhands and Ed Wood, to Donnie Brasco, it was all going swimmingly and then somewhere along the line – amid an overdose of Tim Burton team-ups, lifeless remakes of treasured classics and an avalanche of dollar-flogging sequels – you descended into a parody of yourself.

· Wild review: Reese Witherspoon gets gritty
· The Oscars 2015: our top tips revealed
· Nothing to Crowe about: Is Rusty really any good?
· Australians at the Oscars: Our greatest moments

Sporting a bleach blonde do and creepy moustache, Depp’s latest in a worrying line of flops is Mortdecai, an early contender in this year’s worst movie stakes. Playing a dodgy art dealer with a hammy English accent alongside campy performances from Gwyneth Paltrow, Olivia Munn and Ewan McGregor, it’s a mess of leaden jokes and cumbersome narrative.

Coming so soon after last year’s artificial intelligence dud Transcendence and the blackface antics of his Tonto in Gore Verbinksi’s  remake of The Lone Ranger the year before, Depp’s shtick is beginning to wear thin.

Depp’s career took off as a fresh-faced teen when he played the unfortunate Glenn in Wes Craven’s instant 1980s horror classic A Nightmare On Elm Street and was memorably sucked through his bed and sprayed on the ceiling in a torrent of blood.

This led to the lead role in the hit TV series 21 Jump Street, where his career as a heart throb to millions of teens girls took off. But Depp didn’t play it safe, choosing meatier roles than were expected of him, becoming something of an indie darling.

We loved his James Dean-like juvenile delinquent in shock auteur John Waters’ Cry-Baby and he broke even the hardest of hearts in his first film with director Tim Burton, the 1950s fairy tale tragedy of Edward Scissorhands.

Other spot-on choices included Lasse Hallström’s What’s Eating Gilbert Grape, alongside Juliette Lewis and Leonardo DiCaprio, and Terry Gilliam’s Hunter S. Thompson adaptation Fear and Loathing in Las Vegas, but it was his ongoing work with Burton that really set the pace of his big screen career.

His depiction of the much-ridiculed B-movie director of the same name in Burton’s Ed Wood was genius and we enjoyed the spooky kook of Sleepy Hollow, but sometimes a good thing gets stale. While their collaborations once seemed thrilling, they now feel formulaic.

The remake of Charlie and the Chocolate Factory, his first co-starring with Burton’s then-wife Helena Bonham Carter, felt less than fresh and, while the animated Corpse Bride and musical adaptation Sweeney Todd were fun, Alice in Wonderland was another unnecessary reboot, as was Dark Shadows.

Through all the good times, Depp had a string of beautiful, edgy women by his side: Winona Ryder, Kate Moss and Vanessa Paradis.

Probably the first signs of going off track for his film career though was Hallström’s schmaltzy adaptation of Joanne Harris’ novel Chocolat, lacking the punch of his previous Grape.

The never-ending Pirates of the Caribbean sequels is difficult to take. While the original was a surprisingly fun adventure movie, no more were required. They’re now gearing up for number five.

The Tourist, alongside Angeline Jolie, was painful and the return to Thompson territory in The Rum Diary obeyed the law of diminishing returns.

Some of his finest work in recent years has been delivered in small doses. His cameo is the best thing about last year’s super-weird Tusk from Clerks director Kevin Smith and it was fun to see him pop up in the big screen adaptation of 21 Jump Street.

He almost stole the show from Javier Bardem in the dual roles of a transgender inmate and a soldier in Before Night Falls and he was also great as interviewer in For No Good Reason, the doco looking at the life of artist and Ralph Steadman, ally of Hunter S. Thompson.

But even his best can’t outweigh the bottom feeding we have come accustomed to from the star.

Perhaps saturation is the enemy with Depp’s 70-plus film catalogue? Maybe in future, the less we see of him, the better his once perfect on-screen magic will be?

What’s your view? Has Johnny Depp’s career gone off the boil? Leave a comment below.