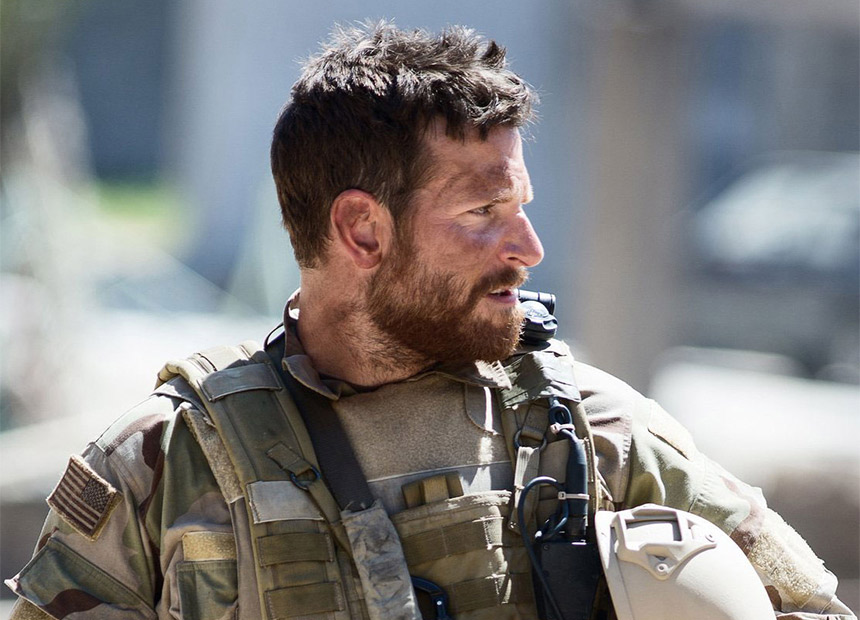 Steven Spielberg was originally slated to direct American Sniper and rather abruptly left the project to go off and do Roald Dahl’s The B.F.G. (wise decision, Stevie) with the directorial honours then falling to cinema stalwart Clint Eastwood. Working off a seriously under-developed screenplay by Jason Hall (who unbelievably has been nominated for an Oscar), based on the autobiography American Sniper: The Autobiography Of The Most Lethal Sniper in U.S. Military History by the sniper in question, Chris Kyle, Eastwood has fashioned one of the ugliest and most overtly racist films in his career. It’s fair game that this is an American war film but the cinematic crimes committed here are so vulgar I was actually stunned by it, and I wasn’t alone there.

Telling the life story of Kyle (Bradley Cooper, in a muscular turn), he’s a gun shooting, rodeo riding, big proud Texan who just wants to be a cowboy but enlists in the Navy SEAL’s programme after the tragic events of September 11, 2001. Through his completion of the rigorous training program (in scenes reminiscent of Peter Berg’s far more impressive 2013 film starring Mark Wahlberg, Lone Survivor), Kyle’s found to be an excellent marksman and is trained as an elite sniper. Shortly thereafter he marries his newfound sweetheart Taya (Sienna Miller) before knocking her up and getting deployed on the first of four engagements in Iraq. Whilst there, Kyle racks up 160 sniper kills becoming something of a legend amongst both the US military and Al Qaeda, which also makes him a target.

The first act of American Sniper acts like a recruitment drive for the American military with some of the most painfully garish scenes involving Kyle’s decision to enlist and the interview with the recruitment officer that follows. I mentioned Lone Survivor previously, a film that manages to temper its patriotism with the personal commitment without ever coming off as browbeating. Eastwood tries to achieve that here, but Berg did it a helluva lot better.

The war sequences, whilst technically impressive, come off like a Call Of Duty video game and lack the resonant punch of films like The Hurt Locker or Lone Survivor. Popping off Iraqi heads falls one step short of Kyle getting a Playstation 4 Achievement Unlocked award yet there’s no real emotional integrity to help us empathise with the impact of the realities of war. This war was shades of grey yet Eastwood is hell-bent on keeping it all heroic stars and stripes.

At no point in the entire duration of American Sniper do any of the Iraqi civilians get to speak bar one who is played as a traitor and another who is a murderous big bad Al Qaeda guy. The Iraqi’s are tarnished with the same myopic view that they are all evil or animals. Even the ‘nemesis’ ex-Olympian-cum-sniper character (who has never been conclusively proven to have existed), never speaks. In the most blatant of visual statements, there’s a shot of a family photo that our big bad sniper ignores as he walks out of the room with his trusty rifle – he’d rather kill Americans than be a father and family man. What a monster, yeah?

It is grotesquely simplistic and utterly irresponsible to allow this sort of ill-researched, blatant racism to be paraded in populist cinema. Another example of this grotesquery is the nefarious big bad Al Qaeda boss who runs around with a cordless drill as his weapon of choice as he murders an Iraqi child in front of his family while the SEAL’s look on. What barbarism. I’m certainly not saying this sort of evil hasn’t happened but, in the case of American Sniper, it’s another unproven fact, unless you take Kyle’s source material as gospel.

The only Iraqi who helps Team America is portrayed as whimpishly suspicious and turns out to be a traitor. This is blatantly set-up in the film’s narrative and is akin to the preposterous ramblings of Fox News’ terror expert Steve Emerson claiming the UK’s Birmingham is a city full of Muslims with archaic practices happening everyday. (Check out his apology and fall out here via The Independent).

All American Sniper successfully does is champion the belief that Americans are righteous, God-fearing people and everyone else is morally and spiritually inferior. It’s blatant racism and it’s a dangerous, far too frequent reality in cinema. We can all swoon about how well made the film is, but there are questions that need to be asked here. Are we, as a cinema going audience, so willing to embrace this sort of hate-inciting tosh?

There are glaring omissions all the way through American Sniper in relation to the character and history of Kyle. We even posted an article about a few facts that didn’t make it to the silver screen that you can read here. Most notably from 2009 up until his death in 2013, he was proven to have either lied about events or embellished the truth. In the writing of his autobiography alongside co-authors Scott McEwin and Jim DeFelice, which never gets mentioned in the film at all, Kyle went to print with a story about a bar fight with Jesse Ventura that never actually happened. He was sued for defamation by Ventura and lost the case posthumously to

the tune of $US1.8m. What’s also not in the film are two fabricated post-war stories, one about him killing two carjackers and the other about sniping looters in New Orleans following Hurricane Katrina. Both were proven false by investigative journalists and law enforcement yet neither is referenced in Eastwood’s movie.

When a shocking turn of events is announced briefly via intertitles at the end of the movie, even this fact comes with the full story redacted, with a good friend of Kyle’s entirely missing from this film.

Instead of tackling the complexities of this man, which would’ve made for some seriously great drama and much needed dynamics in the film, Eastwood tries to hone in on post-traumatic stress disorder with scenes of Kyle adjusting back to family life in America. Sadly, given the films’ Call Of Duty war sequences, this juxtaposition doesn’t gel at all. It comes off as arbitrary and half-assed with neither Cooper’s Kyle nor Miller’s Taya remotely likable. Knowing that there are questions of legitimacy in the Chris Kyle legacy, how much of what you’re seeing on screen is truth anyway?

American Sniper is a reckless, irresponsible war film that’s poorly researched or wilfully ignorant, flagrantly racist and based on a source that has found to be questionable at best. If you’re going to see it – take your critical eye and don’t accept what you see as given. Or, for my money, watch The Hurt Locker or Lone Survivor instead.

This article appeared courtesy of thelowdownunder.com