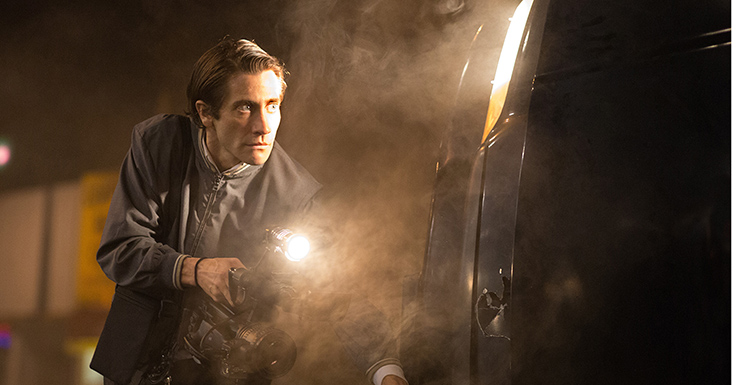 It’s been one hell of a year on the big screen, so be damned with the usual top 10 restrictions; we’re pushing the boat out with our finest 15.

Several of the films have powerful solo performances, Locke and Under the Skin, others, such as Whiplash, are explosive, and then there’s the two films that inspired awe, Boyhood and 12 Years a Slave, which were both simply spectacular in very different ways.

Here’s our best 15 films released to Australian audiences between January 1 this year and December 31, in descending order of awesomeness.

In a year packed with fantastic docos, with some of the field’s strongest including Seduced and Abandoned, Gore Vidal: The United States of Amnesia, Life Itself and Finding Vivian Maier, Particle Fever shone the brightest. Levinson studied particle physics at Berkley, but despite clearly possessing a gargantuan brain, this fabulous whistle-stop tour of the Hadron Collider and the clever and surprisingly cool boffins hunting for the building blocks of the universe, the Higgs Boson ‘God particle’, never makes you feel out of your depth. Instead, it fills you with awe and wonder.

Goodness knows why no one goes to see Australian films (seriously guys, sort it out) because there’s been some cracking efforts this year. The first of three to make it into the top 15, writer/director Hugh Sullivan’s The Infinite Man is a very clever take on time travel, and miraculously makes the rom-com genre infinitely watchable too. The micro-budget indy flick has a miniscule cast of three, with Josh McConville as Dean, the hapless boyfriend of Packed to the Rafters star Hannah Marshall’s Lana and Alex Dimitriades as her bogan ex. When Lana dumps Dean after his laughably poor attempt to reignite their floundering relationship, he invents a time travel gadget to set things straight, instead setting off increasingly complex paradoxes with multiple versions of each character running around. It’s a head-scratcher, but one packed full of witty fun and electric chemistry.

Sexy Beast director Jonathan Glazer’s deeply unsettling and yet strangely alluring Under The Skin is a genre oddity of the utmost excellence. Taking time out from admittedly fun Blockbusters like Captain America: The Winter Soldier and Luc Besson’s Lucy, Scarlett Johansson should be commended for shooting such a resounding odd micro-budget project. A sort of vampiric alien in decidedly human, cheap fake fur-clad coat form, she cruises round Glasgow in a white van picking up unsuspecting blokes (non-actors unwittingly caught on hidden camera), then drains their life-force in a spectacularly creepy scenes, before encountering a young man with facial tumours (Adam Pearson) who ignites a spark of latent humanity. And then there’s that final act…

Now Tom Hardy is worth the ticket price alone, but some may balk at the thought of him stuck in a car, solo, for the entire (admittedly sharpish) 85-minute runtime, while chatting about cement and his failing marriage on the mobile in an occasionally dodgy Welsh accent. Fear not, this is a dazzling work that rests squarely on Hardy’s capable shoulders. Writer/director Steven Knight wrests a commendable amount of emotional turmoil from the material, with a strange sort of poetry wrought from cement mix. The night cruise along the motorway, shot almost entirely from within the car, is quite haunting.

From celestial bodies to those rather grubbier, Cronenberg’s biting satire of Hollywood, both its self-obsessed stars and its whacked-out fans, is trippy and viciously rewarding. Mia Wasikowska plays the mysterious Agatha, who turns up on a bus and talks her way into the home of Julianne Moore’s neurotic, fading star, immediately causing trouble. Robert Pattinson returns after collaborating with Cronenberg in the criminally underrated Cosmopolis, while John Cusack and Olivia Williams are razor sharp as the self-serving parents of Evan Bird’s deviously spoilt child star. All this and a Carrie Fisher cameo as herself to boot.

Tilda Swinton’s first of three appearances on this list, Only Lovers Left Alive sees her paired with Tom Hiddleston as literature and rock-loving vampire lovers – what more do you need to see this film? Jarmusch works the electric chemistry between this outrageously aesthete pair and throws in a curmudgeonly John Hurt and a whacked-out Mia Wasikowska for good measure. Nothing much of note happens, despite their tenuous living arrangement seemingly likely to derail at any moment, but the undeniably rich world in which these fantastic players work their dark magic is thrillingly alive. Simultaneously melancholy and playful, it’s a deliciously wicked endeavour.

More proof of a spectacular year for Australian cinema, in content at least, if not box office performance, Sophie Hyde’s breathtaking feature debut 52 Tuesdays explores the boundaries of both cinema and gender identity in a seamless way. Breakout star Tilda Cobham-Hervey plays 16-year-old Billie, grappling with her own sexual awakening as her hitherto lesbian mother Jane (Del Herbert-Jane) shares the news that she will gender transition and is now known as James. Further complicating matters, James need his space, so ships Billie out to her well-meaning but largely absent father. Shot each Tuesday for one year, hence the title, gender and sexuality are explored with the deftest of touches, delivering a spectacularly nuanced and rewarding film.

It’s been a bountiful year for intelligent blockbusters, with highlights including Xmen: Days of Future Past, Edge of Tomorrow and Australian apocalyptic offering These Final Hours, but South Korean writer/director Bong Joon-Ho’s fantastically bonkers debut English language feature steals the crown. Snowpiercer is set in a dystopian future where mankind has been wiped out by a failed experiment intended to head off global warming that ended up freezing the planet. The only survivors are the inhabitants of the eponymous bullet train that carves its way through the ice, with a volatile class war brewing. The stellar cast includes Only Lovers Left Alive’s John Hurt and Tilda Swinton, as well as Song Kang-ho, an against-type Chris Evans, Jamie Bell, Octavia Spencer and Ed Harris. Insanely brilliant.

There’s a tantalising darkness just beneath the surface of Anderson’s trademark whacky whimsy in his latest offering, The Grand Budapest Hotel, making it one of the year’s most unforgettable films. Regulars like Tilda Swinton, Bill Murray and Owen Wilson are present and correct, but it’s Ralph Fiennes who shines as the impeccably presented though occasionally foul-mouthed and always-conniving concierge of said hotel, Monsieur Gustave. A fabulous fop, Tony Revolori is also fantastic as his lobby boy Zero, as is Willem Dafoe’s leather-clad assassin.

Another incredible Australian effort, Ten Canoes writer/director Rolf de Heer’s Charlie’s Country reunites with that film’s star, the inimitable David Gulpilil, who also co-wrote this magically realist exploration of the effects of the Northern Territory intervention. Gulpilil, as the eponymous Charlie, dreams of returning to his people and traditional way of life, setting out on a quest across the unforgiving yet ethereally beautiful bush. He’s a joy to watch, and Luke Ford also puts in a delicately judged performance as a good copper who nonetheless finds himself losing patience as others lose their way. Far from didactic, there’s a sharp seam of humour through this searingly honest movie.

What makes musical genius? Is it inherent, or does it have to be dragged kicking, screaming and bleeding from you? Writer/director Chazelle’s orchestral triumph hurls young jazz drummer Andrew (Miles Teller, The Spectacular Now) into the unforgiving arms of tyrannical Shaffer Conservatory of Music instructor Fletcher (J.K. Simmons), who will stop at nothing to preserve their number one ranking. The a latter is a human hurricane of Malcolm Tucker proportions, a truly terrifying site to behold, and as the pair become bound in a manic push for perfection, you’ll believe wholeheartedly that Andrew would haul himself from a car crash both literal and metaphorical to please Fletcher.

Swedish writer/director Ostlund’s emotional rollercoaster spins on a relatively simple if dramatically staged premise. When a controlled explosion in the French Alps appears to go wrong, a vast wall of snow thunders towards the hotel terrace where a young family are eating lunch. Tomas (Johannes Kuhnke) runs, leaving his wife Ebba (Lisa Loven Kongsli) behind to shield their two young kids. The aftermath, played out against the imposing beauty of the Alps and the vast wooden hallways of a sparsely stylish hotel, is fraught with riveting tension, only exacerbated by Ola Flottum’s soaring score. Look out for a fab cameo from Game of Thrones’ ginger giant Kristofer Hivju too.

Dan Gilroy’s pitch black satire of the 24/7 news cycle and our morbid fascination with the misery of others is a devious delight. Jake Gyllenhaal puts in a career-finest performance as ghoulishly gaunt anti-hero Lou Bloom who inveigles himself into the trust of TV Producer Nina, an impeccably judged turn by Rene Russo delicately balancing power and desperation, chasing car accidents and crime to get the grimmest footage on the morning news broadcast. Bloom’s quasi-management speak is a hoot, and rarely will you find yourself rooting for such a thoroughly repugnant human being.

The simplicity of story in Linklater’s Boyhood, following the not-overly eventful life of six-year-old Mason till he leaves home for college as a teen, is an incredible cinematic achievement. Rather than casting several young actors, Linklater dropped in on his young star Ellar Coltrane, his fictional sister Sam, played by Linklater’s own daughter Lorelei, and their separated parents (Ethan Hawke and Patricia Arquette) over the course of 12 years. Saturated with the understated love and simmering tensions of universal families, this easily surpasses the Before Sunrise trilogy and is one of the year’s most joyous movies.

It may have taken its time to daunder down under, garnering plenty of awards buzz behind it, but late January finally saw Steve McQueen’s impeccably crafted slavery epic hit our shores, and boy was the eventual Best Picture Oscar-winner worth the wait. Crammed full of incredible performances from the likes of Michael Fassbender, Sarah Paulson and Benedict Cumberbatch, Chiwetel Ejiofor is magnificent in the lead role of real-life memoirist Solomon Northrop, a relatively well-to-do black man who was abducted from his loving home in New York State and forced into brutal, dehumanising labour in the Deep South. As stunning as the scene of his near-hanging is, the show’s stolen by the radiant Lupita Nyong’o, with her tour de force turn rightfully scoring the Best Supporting Actress Oscar – gobsmacking to think this was her first feature role.