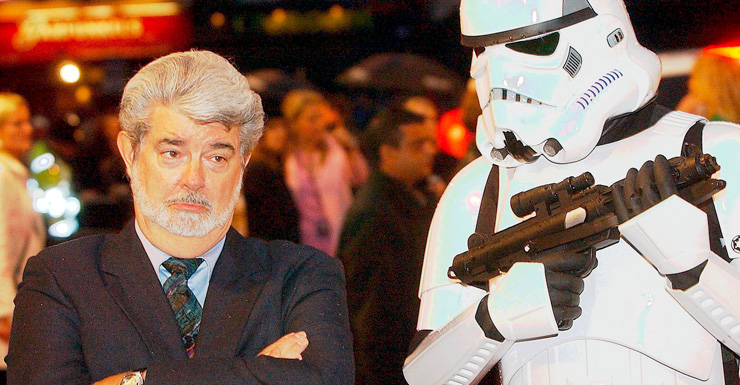 Disney has leaked the names of the Star Wars VII main characters, and series creator George Lucas is not happy.

Okay, so apparently Lucas is refusing to even watch the teaser trailer, preferring to wait for the full movie, so he could be denying all knowledge of the new names.

But we all know the director is really holed up in a billion dollar mansion somewhere in the Nevada desert wearing a wookie mask and throwing Darth Vader figurines at burning effigies of new director JJ Abrams.

• Eight awesome things about the Star Wars teaser
• Star Wars to return, but will it be any good?
• The best 28 Star Wars scenes from all six films

His anger is justified. The new Star Wars names are just not 1970s space-age kitsch at all.

We think we know exactly how Lucas would rename the cast. Who is Daisy Ridley’s character, an intergalactic tween icon? This sounds a bit too much like JJ Abrams is channeling Ri-Ri (Rihanna) and Tay-Tay (Taylor Swift).

I think we all know that George Lucas is no fan of post-1980s pop music.

Rey must go, and in its place must be something far more Padmé Amidala-esque. Something like: How unimaginative, Lucas would say. It has a double consonant, but apart from that there just isn’t enough going on here.

Remember the soaring promise we felt when Luke Skywalker was first introduced? Granted, Lucas did not look very far for first-name inspiration, but Skywalker was everything we needed in a farm boy turned wizard-lord saviour of the universe.

Finn, on the other hand, is far too clipped and safe and decidedly un-quiche. This one’s getting warmer, but for an obviously evil dude sporting an angry-looking, triple-bladed war weapon, this name is far too tame.

We still don’t know which actor is playing this bad guy, but Lucas definitely would have whipped out his thesaurus, flipped to ‘words that sound evil’ and picked out something dripping with a little more menace.

Plus, it sounds way too much like CeeLo Green, the rapper best known for ‘Crazy’.

Here’s what Lucas would suggest instead: The soccer droid finally has a name, and it sticks to all the robot naming conventions set in place by Lucas.

It’s cutesy and fun and sounds like it has a lot of personality, just like our favourite gold butler R2-D2 and bleeping trashcan C-3PO.

Even Lucas wouldn’t argue with this one. But we can.

Abrams has seriously called his bouncy ball robot “BasketBall 8”? No, that is not okay. If it slam dunks itself through any hoops, we are going to scream. Nobody wants a repeat of Jar-Jar Binks.

Abrams may as well have named it Windows XP and quit there. Okay, so it actually sounds like George Lucas named this X-Wing pilot, played by Oscar Isaac.

We’re pretty sure he snuck into the studio at night disguised in a gigantic Sith cape and scratched out ‘Damon’ with a lightsaber-shaped clicky pen and substituted this monstrosity.