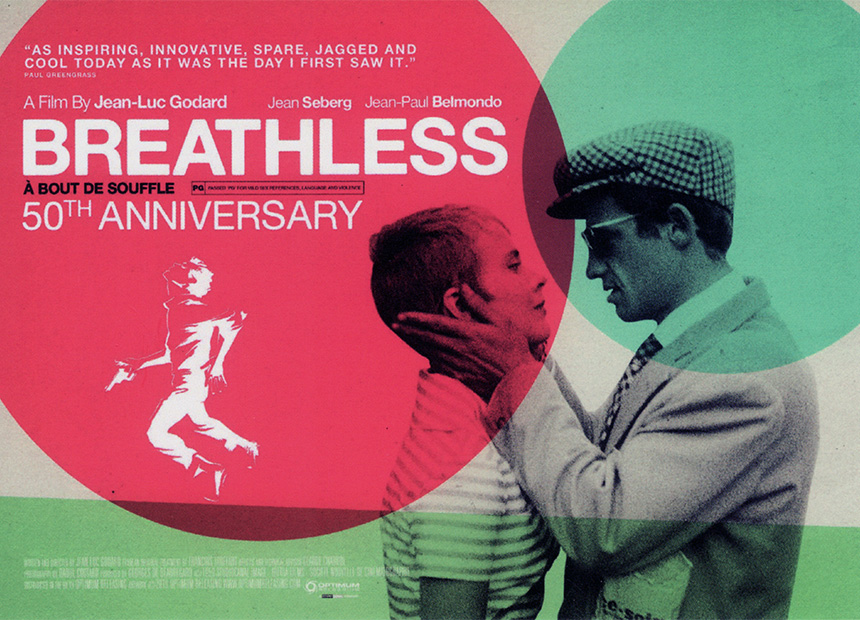 A few weeks ago, a list made it on to the internet drafted by Academy Award-winning director Martin Scorsese setting out his list of 39 essential films for the aspiring film maker.

Unsurprisingly the list is filled with classics from across the globe from the 1940s and 1950s – when Scorsese himself came of age.

· Interstellar review: stunningly beautiful
· ‘Gone Girl’ is unlike anything you’ve ever seen
· Get On Up: New James Brown film a must see

The director of Raging Bull, Taxi Driver and The Wolf of Wall Street, among many other cinematic greats, was born in Queens, New York in 1942 and made his first feature film in 1967.

In tribute to his choices, The New Daily has chosen 20 foreign films you should put on your list of movies to see before you die.

One of the most influential films of all time, Breathless has inspired generations of filmmakers and ushered in the French New Wave. Michel is a petty criminal who models himself on Humphrey Bogart. One day he botches an operation and kills a motorcycle cop. Penniless and on the run, he turns to his journalist-American girlfriend whom he tries to seduce and then schemes to escape with to Italy. The most noticeable aspect to Breathless is how hip and uninvested the characters are to the very things going on around them. It’s got style, it’s got panache, it’s got Jean-Paul Belmondo with a devil-may-care attitude. What more do you need?

Hollywood director Ang Lee returned to his native Taiwan to direct this ancient martial arts saga. Set during the Qing dynasty, Li Mu Bai (Yun-Fat) is an accomplished swordsman who sets about vengeance on the assassin who had murdered his master years before, but, before he completes his charge, he becomes embroiled with recently married princess (Ziyi) and her forbidden love with a bandit. Crouching Tiger, Hidden Dragon is a beautiful, graceful film that contains perhaps the most poetic and artfully choreographed action sequences in cinema history.

Let The Right One In

Perhaps the greatest vampire movie ever made. Oskar (Hedebrant) is an anxious 12-year-old living on the outskirts of Stockholm. He is relentlessly bullied at school and struggles to make friends, that is until he meets Eli, a girl vampire who has just moved in next door to him (along with an adult who kills to supply her with blood). Over time, Eli encourages Oskar to stand up for himself, and the two develop a strong bond. The genius in Let The Right One In, is that is pays scarce attention to the conventions of vampire movies and frames the drama around the relationship of its two adolescent leads.

One of the greatest films about childhood ever made. Twelve-year-old Antoine Doinel’s life is a living hell: constantly tormented by his teachers and his parents he frequently runs away to indulge life’s small pleasures and live with a sense of adventure. But in a series of escalating incidents he tries to prove himself to the adults with disastrous consequences. Yet all through his travails we revel at Antoine and his fighting spirit that marks him out against a cold unsympathetic world.


A glorious and ecstatic film that is an ode to romance, Amelie (Tautou) is a shy 20-something waitress who decides to improve in the lives of those around her with a series of anonymous elaborate pranks. At first her efforts are successful, but she still must overcome her own isolation and conduct a romantic journey to win the heart of a mysterious stranger. Filmed in glorious pastel colours and played out in an infectious whimsy. Amelie was an Oscar-winning smash when it was first released and still remains a delight.

Polish director Krzysztof Kieslowski filmed his Three Colours Trilogy in just over two years. Each film focuses on a theme from the French revolution – liberty, fraternity and equality – as symbolised in the French national flag: red, white and blue.

Three Colours Blue (1993) centres on a recently widowed woman who attempts to cut herself off from other people and pain only to find that she can’t.

Three Colours Red (1994) focuses on the unlikely friendship between a depressed model and a lonely, voyeuristic judge.

Three Colours White (1994) is a black comedy about a down-and-out beggar who leaves Paris for his native Warsaw to seek vengeance on the world.

Heralded as one of the greatest films of all time, Bicycle Thieves (Retitled The Bicycle Thief for US audiences) is a film of devastating simplicity. A man takes a job hanging posters on the proviso that he receive a bicycle. On his first day of work his bicycle is stolen and he spends the entire day with his young son searching for it. From this innocuous and straightforward premise, the film unexpectedly moves toward a devastating and powerful conclusion.

Regarded as one of the greatest films of all time, Akira Kurosawa more or less created the template for every action movie ever made with his 1954 masterpiece. It follows the story of a village of farmers that hire seven masterless samurai to protect their village from bandits who will return after their harvest to steal their crops. One by-one the samurai are recruited, then once united, they train and protect the villagers from the bandits coming onslaught.

Regarded by many as the greatest director in the history of cinema, Swedish auteur Ingmar Bergman made films for over five decades that posed life’s difficult questions with unflinching honesty and emotional sincerity. Wild Strawberries is about a cantankerous widower Isak Borg (Sjöström), a 78-year-old physician setting out on a long car journey to receive an honorary doctorate from Lund University. Along the way, suffering from old age, daydreams and nightmares he travels back and re-engages with scenes from his youth. From the startling experience Isak must revaluate the course of his entire life. Faced with the weight of his choices and his approaching death, Isak overcomes his misery and decides to turn toward kindness and love for the rest of his days. Focusing on trademark difficult themes of existence and the meaning of life, Wild Strawberries remains one of Bergman’s most optimistic and life-affirming films.

Set against the backdrop of Mussolini’s Italy, a weak-willed political agent working for the fascist government is sent to Paris to execute his former professor writing dissident theories against the regime. Jean Louis Trignant plays a seemingly ordinary man, who is in fact horrified by his own true nature and desperately pretends to be normal only to conceal his true self from the word – with murderous consequences. The Conformist announced the arrival of future Oscar-winning Italian maestro Bernardo Bertolucci to the world with this sumptuous and evocative film. Indeed, legendary cinematographer Vittoria Storaro would make his reputation by beautifully recreating the worlds 1930s Rome and Paris.

The Lives of Others

Best Foreign Picture Oscar winner in 2006, The Lives of Others is the story of a Stasi officer, Gerd Wiesler, who is sent to monitor the political activities of a playwright and his actress girlfriend. Unexpectedly, Wiesler is touched by the couple’s idealism and their kindness, and suddenly the cold-hearted political operative is moved to protect the couple from the ruthless government forces he represents. As the playwright begins to delve into subversive political activity, Wiesler must protect his unknowing friend from the full weight of East German’s authoritative government. An unexpected masterpiece from first-time German director Florian Henckel von Donnersmarck.

Pan’s Labyrinth is a fairytale set in post-civil war Spain of 1944. Ofelia is the stepdaughter of a ruthless military commander determined to squash dissent against Franco’s government. One night during a tense skirmish with rebel fighters at a military base, Ofelia (Baquero) is met by a faun who believes her to be a fairytale princess and sets her three challenges to accomplish immortality. From this point Ofelia enters a strange underworld of otherworldly insects and creatures and faces life-and-death challenges to save her ailing pregnant mother (Gil) and her unborn baby brother. Del Toro parallels the military actions against Ofelia’s dramatic otherworldly adventures into the labyrinth. Pan’s Labyrinth shows Del Toro is a bona fide genius and master of cinematic invention.

Luis Buñuel was Spain’s surrealistic cinema genius, and The Exterminating Angel takes a novel and avant-garde premise, that would take repeat viewings (and possibly several hours of reflection) to sink in. A group of wealthy Spaniards attend a dinner party, but then inexplicably are unable to leave the room. Days pass and the group grows tired, hungry and overwhelmed but the group is incapable of leaving their lofty party, before turning increasingly bitter and savage against one another.

City of God depicts the growth of organised crime in the suburbs of Rio De Janeiro with a piercing emotional intensity, the film unflinchingly charts the lives of those affected by Rio’s gang culture through the 1970s and 80s. As Rocket, the narrator moves away from his childhood friend and follows his passion for photography his contemporaries delve deeper into the sadistic world of street crime. From its opening frame City of God unspools with ferocious energy, immersing the viewer in the sun soaked life of Rio’s squalid backstreets.

The Battle of Algiers

The Battle of Algiers is a film about the Algerian people’s struggle for independence against the colonial French government. It depicts both the coloniser and the colonised as perpetrating atrocities against innocent civilians in pursuit of their own political objectives. As the colonial government becomes increasingly repressive, simultaneously the liberation rebels become more extreme in fighting back against government forces. The Battle of Algiers was far ahead of its time as an action piece and was directly referenced in contemporary Hollywood action movies from The Bourne series to The Dark Knight Rises.

Federico Fellini’s iconic 1960 classic La Dolce Vita centres on Marcello (Mastroianni), a gossip columnist who writes on the glitzy world of celebrity. In a series of episodes, Marcello tours Rome’s glamorous world of night clubs, movie stars and decadent parties, yet dissatisfied, he attempts to find love and a more meaningful life for himself. Fellini’s classic is a cultural and cinematic icon (the film actually invented the phrase paparazzi) that came to define the allure of post war Italy.


Widely regarded as one of the greatest films of all time and hailed as the defining work of director Ozu. An ageing couple come to Tokyo to visit their adult children, but find they are too busy to be bothered with them, only their widowed daughter-in-law takes time to pay attention to them. Ozu uses the elderly couple’s plight to meditate on loneliness, isolation and the gulf between parents and children.

This harrowing Romanian thriller was Palm D’Or winner at the Cannes film festival. Two women living under Ceausescu communist regime in 1980s Romania struggle to gain access to an illegal medical procedure. Through a series of miscommunications and deceptions on a single day they are embroiled in a nightmarish odyssey to see out this single task. Throughout the film the power and might of the communist state is never explicitly stated but is intensely implied as the women grow increasingly desperate to protect themselves from discovery by the authorities.

Twenty foreign films to see before you die