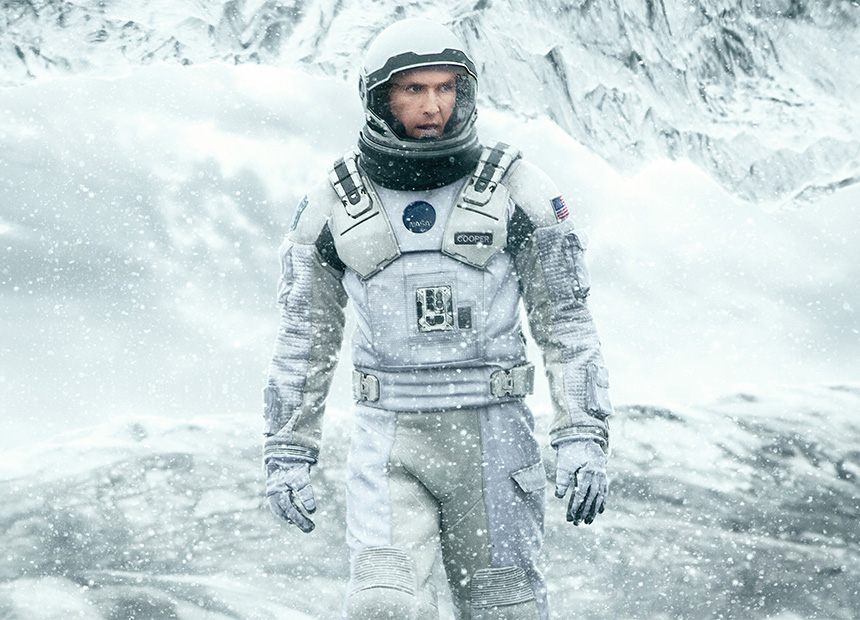 As someone who never reads reviews and rarely watches trailers before reviewing a film, it was, nonetheless, all but impossible to avoid the buzz surrounding Christopher Nolan’s first film post-Batman, with the sci-fi epic Interstellar, penned alongside his brother Jonathan, breathlessly dubbed a ‘masterpiece’, in some corners.

Imagine my surprise, then, when a flustered check of my watch as the film finally kicks into orbit revealed we’re already at the 90-minute mark – it’s almost three hours long.

Matthew McConaughey is Cooper, a former NASA pilot who, like the rest of the world, has been grounded on an Earth that’s slowly choking to death. As crops fail wholesale, the only job that matters is tending to the dying land. It’s an interesting enough, if not entirely original, concept that plays on the current political, social and environmental dramas surrounding the current threat of climate change. Unfortunately you’ll get scant detail here, beyond one intriguing nugget that history has been re-written to suggest the moon landings were faked, in an effort to refocus school kids on the earthly matters at hand.

Instead, we mostly focus on a love story between father Cooper and daughter Murphy, played by a red-haired and full-lipped Mackenzie Foy as a child and the talented Jessica Chastain as a woman. Other family members, including son Tom (Timothee Chalamet) and father-in-law Donald (John Lithgow), barely get a look in.

Eventually they are left behind as fate, and a truly odd sequence involving dust and seeming poltergeist-tossed books, leads Cooper to humanity’s last hope – a secret NASA space mission run by Michael Caine that’s shooting for a wormhole created by strange, otherworldly beings who can manipulate gravity, opening up the real possibility of habitable planets far beyond humanity’s current reach.

The cardboard cut out family is replaced by cardboard cut out astronauts, played with a truly odd lack of depth by Anne Hathaway, David Gyasi and Wes Bentley, plus the welcome vocal talents of Bill Irwin as seriously snarky robot assistant TARS who ironically provides the film’s only human touch. And that’s part of the problem here – none of these characters feel fully-fledged, not even Cooper (stoic hero) and Murphy (whiny kid). They’re here to fulfil dramatic purpose, rather than explore genuine emotional depths. Indeed, for a film so rife with schmaltzy musings on the meaning of life, it’s alarming how lacking it is in this department and certainly makes the inordinate run-time a big ask.

Where it excels, eventually, is in the truly breathtaking journey into the stars and beyond, with Nolan once again pulling out the Inception-style wow factor, this time on 70mm film, that’s missing in his more grounded superhero movies. But even here it feels a little like cheating, owing a huge visual debt to 2001: A Space Odyssey almost to the point of plagiarism, particularly with the spinning space station.

While both planets visited, a tsunami-plagued waterworld and Hoth-like wasteland complete with frozen clouds, are pretty to look at, again, there’s very little to these adventures. Major incidents occur, but their effect is scantly grappled with, beyond a nice focus on gravity’s influence on time, meaning that their families back home age much more rapidly in their absence.

Again, other than a few (illogical) video messages that I doubt would have been approved by executive producer Kip Thorne, the celebrated theoretical physicist, this isn’t really capitalised on. The emotive stuff rarely moves beyond Hallmark platitudes about a father saving the world for this daughter, hammered home by repetitive and awkward quoting of Dylan Thomas’s Do Not Go Gentle Into That Good Night. It’s left to Hans Zimmer’s startling, organ-led score to do much of the heavy lifting.

Never quite as clever or as emotionally engaging as Nolan clearly thinks it is, there is awe here, but no real wonder. In truth, it’s closer in tone to last year’s technically excellent, thrilling if not fulfilling Gravity than it is to Kubrick’s grand space opera. While it will no doubt find willing audiences and rightfully soar in the technical categories of the Oscars, Interstellar ultimately comes back down to earth with a thud, and a feeling that it’s one very expensive bucket of popcorn, leaving you hungry for something more nourishing.

This article appears courtesy of thelowdownunder.