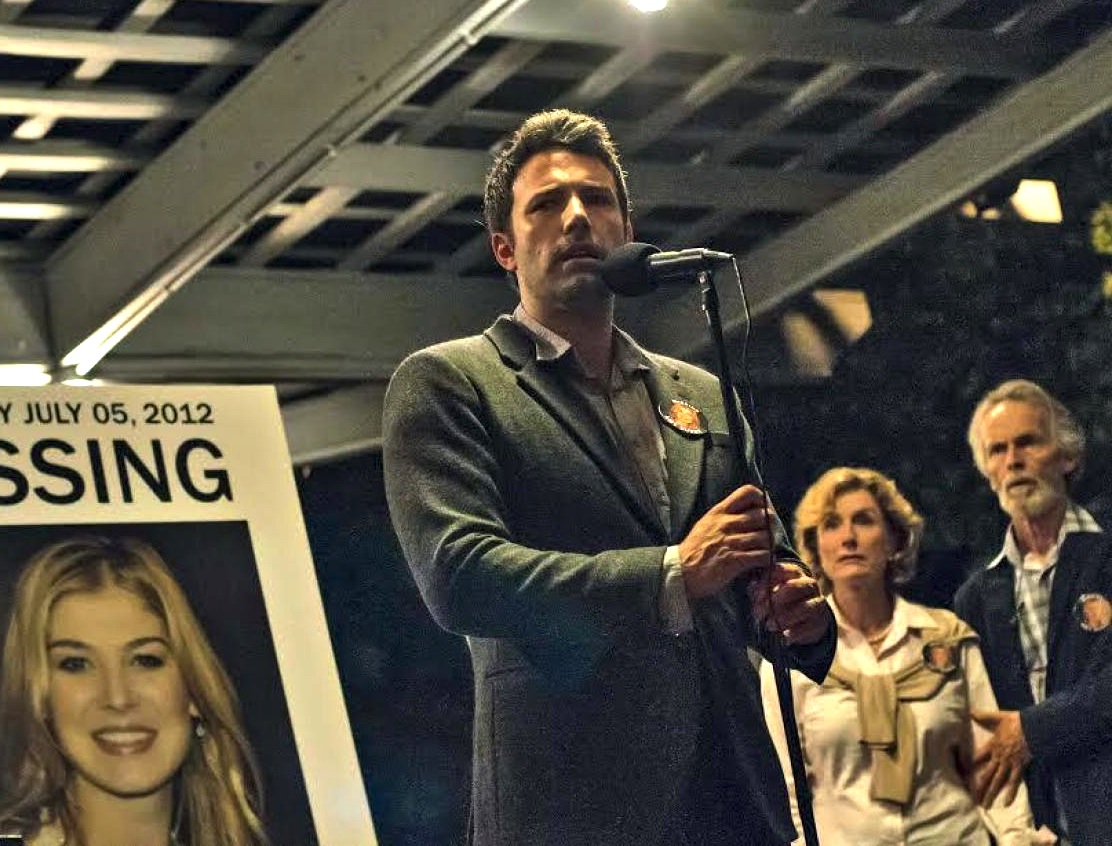 For those who haven’t read the book, David Fincher’s Gone Girl may come as a bit of a shock to the system.

Engrossing, sporadically violent and, at times, hilarious, the unconventional thriller is unlike anything else in cinemas.

Centred on the disappearance of complicated housewife Amy (Rosamund Pike) and the ensuing media circus surrounding her suspicious husband, Nick (Ben Affleck), the movie jolts the audience from the opening scene, as Nick intimately shares his fantasy of smashing his wife’s skull in.

It’s immediately clear that if anyone was going to do justice to Gillian Flynn’s sinister love story on the big screen it would be Fincher (The Social Network).

His calculated camera work and eerie gliding shots work beautifully to foster the sense of unease present in both the characters and the audience.

Affleck is in his element as a smug, self-centred and hapless man trapped in a nightmare with zero coping strategies. You root for him, hate him and doubt him all at once.

Pike is captivating as the elusive Amy. Aloof and icy, at times she ventures into caricature territory, and her bizarre one-liners often break the film’s bleak rhythm – a feature that is no doubt intentional on the part of Fincher.

Honourable mention must also go to a completely out-of-character Neil Patrick Harris, who shakes off his How I Met Your Mother charm as Amy’s obsessive ex-boyfriend, Desi Collings.

Fans of the book will be pleased to know that the multi-layered story hasn’t been compromised, merely trimmed, and set to a perfectly unnerving soundtrack composed by Atticus Ross and Trent Reznor.

At more than two hours, the movie is all-absorbing and credit must be given to Fincher for imposing order and lucidity on an elaborate plot that could give even the most focused viewer a headache.

Flynn’s razor sharp dialogue offers tongue-in-cheek commentary on everything from the media, to relationships, to image management, making the film not so much a murder mystery as a study in humanity.

Unlike its complex protagonists, the serpentine thriller can be summed up with one word: killer.

LA Times says: “For once all the fuss is justified. Superbly cast from the two at the top to the smallest speaking parts, impeccably directed by Fincher and crafted by his regular team to within an inch of its life, ‘Gone Girl’ shows the remarkable things that can happen when filmmaker and material are this well matched.”

Entertainment Weekly says: “It’s okay to be nervous. Our first instinct when a beloved book is turned into a movie is to get up on our hind legs and anticipate all the ways that Hollywood will get it wrong. Fincher and Flynn’s film gets just about everything right.”

Vulture says: “The movie is phenomenally gripping – although it does leave you queasy, uncertain what to take away on the subject of men, women, marriage, and the possibility of intimacy from the example of such prodigiously messed-up people.”

See it Before friends can ruin it for you.

Kids? Absolutely not – intense sex scenes and some graphic violence.

‘Gone Girl’ is unlike anything you’ve ever seen