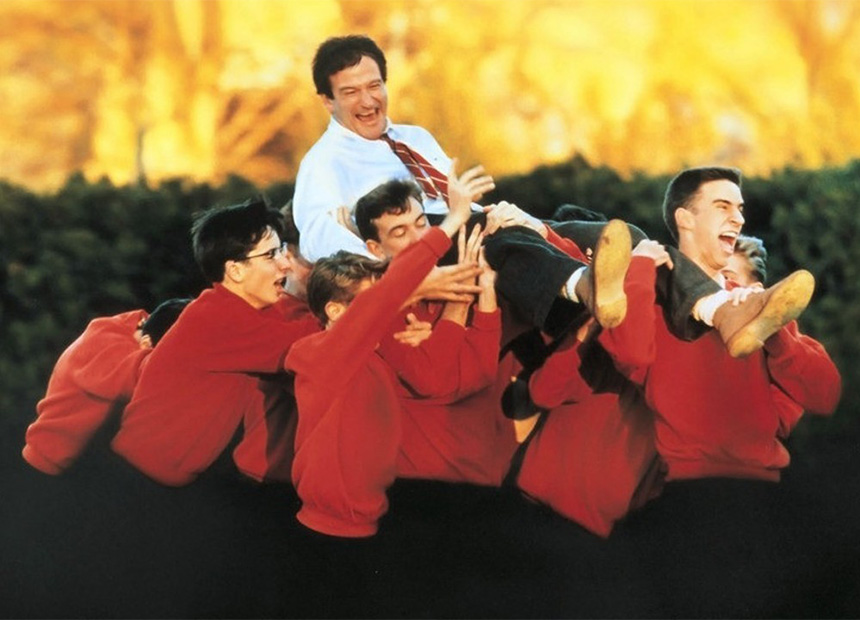 Williams majestically, and often tenderly, scaled the highs and lows of drama and comedy, with his passion oozing into every performance whether he was playing Mrs Doubtfire, Mork or John Keating in Dead Poets Society.

His light side was essence of what it was to be an entertainer but he could also bring a darkness to characters that were very much channeled from his own personal demons.

Here are his most memorable comedic and dramatic performances.

“Oh Captain, My Captain”. The role that defined him and made him one of the most beloved actors to generations of filmgoers, Williams embodied the role of John Keating, the English teacher who inspired his pent up students to ‘seize the day’ and live their lives with passion. He received the second of his three Best Actor nominations for this film but lost out to Daniel Day-Lewis who won for My Left Foot.

Alongside the great Robert De Niro, Williams brought a holistic gentleness to Dr Malcolm Sayer, a role based on a real-life doctor, Oliver Sacks, who in 1969 found a way to save the catatonic patients in his charge and revelled in their new-found lives.

His Academy Award winning performance in this Oscar winning 1997 film was another of Williams’s finest performances. As psychologist-with-heart Sean Maguire, Williams literally stole the show from newcomers Matt Damon and Ben Affleck. “You can’t tell me what it feels like to wake up next to a woman and feel truly happy.”

As the heartbroken Dr Christy Nielsen (pictured above with co-star Cuba Gooding Jnr.) searching for his wife somewhere between heaven and hell, What Dreams May Comes was one of Williams biggest blockbusters from the 1990s.

The actor ventured into his dark side in this psychological thriller, playing a man who becomes obsessed with a family after developing their photos. It was chilling to see Williams ease into such a creepy and convincing killer.

Yes, he was the master of comedy, but Williams was also quietly devastating in serious roles. Playing opposite Al Pacino and Hilary Swank in this bleak Christopher Nolan mystery, Williams was powerful and unsettling.

Mork was Williams’s breakout Hollywood role after being a longtime stand-up comedian. The bizarre alien, Mork, captured the hearts of America and then the rest of the world with his strange catchphrase “nanu nanu”. Mork and Mindy was put on air after Mork made a weird cameo appearances on Happy Days. It didn’t make sense then and it doesn’t make sense now, but the kids loved him.

His first major film role (and only his second ever), Popeye showed Williams was capable of more than just a television character. Popeye saw him act opposite Hollywood royalty Shelley Duvall, as Olive Oyl, and under director Robert Altman.

Alongside acclaimed actors John Lithgow and Glenn Close, who both received Oscar nominations for this film, Williams showed he could nail comedy-drama as Garp, the illegitimate son of a feminist who grows up in an unconventional world. A strange film that moved acclaimed film critic Roger Ebert to ask: “What was that all about?”

Another film that traversed drama and comedy, Williams was hilarious as a Russian musician in the Moscow circus who defects to he USA when visiting for a performance.

After Dead Poet’s Society, this is arguably Williams’s most famous performance, and mostly for his radio catcall “Good Morning, Vietnam”. The role, which called on him to show the funny side to war as well as the sad realities, gave him his first Best Actor nomination. The film also happily re-injected life into Louis Armstrong’s classic song What A Wonderful World.

As Joey O’Brien in Cadillac Man, Williams nailed the part of a New York car salesman who gets held hostage by Tim Robbins’s unhinged criminal on the worst possible day of his life.

This mega-budget Steven Spielberg vision of Peter Pan had a superstar cast, which included Julia Roberts, Dustin Hoffman and a very young Gwyneth Paltrow, but Williams was the heart of the film. As the grown up Pan who gets a second chance in Neverland, Williams was pure magic.

The Disney animation was an instant classic thanks to Williams’s gleeful performance as the bright blue Genie. A consummate scene-stealer, Williams ad-libbed so many of his lines the script was turned down for a Best Adapted Screenplay Oscar nomination.

Williams’ gender-bending hit featured the star as an out-of-work actor forced to dress as a elderly female housekeeper to spend time with his kids. Impressive make-up and an even more impressive performance made this one of the most-loved family comedies of all time.

Continuing Williams’s dream run of brilliant children’s movies, Jumanji features a supernatural board game that comes to life in a series of over-the-top action sequences. Williams played a 12-year-old boy trapped inside the game for 26 years, proving no one could capture childhood exuberance quite like him.

‘Fosse! Fosse! Fosse!’ American updates of foreign films can often fall flat – not the case with this joyous, high-camp reboot of French/Italian farce La Cage aux Folles. Williams owned the role of gay dad and Miami nightclub impresario Armand Goldman, who has to play it straight for one night to help his newly engaged son.

As he did in Awakenings, Williams played another real-life doctor in this heartwarming film about the original clown doctor alongside Philip Seymour Hoffman and the lovely Monica Potter.

What was your favourite Robin Williams film? Tell us below.

Amber Heard’s sister and friend give evidence
‘Should have been a penalty’: Boy crash-tackled by PM gives his verdict
Apple sued over ‘ear shattering’ AirPods alert
Russian Google to file for bankruptcy
Man arrested at NSW school for bestiality
Concern about COVID-19 deaths in aged care
Wild, funny, brilliant: a tribute
Today's Stories