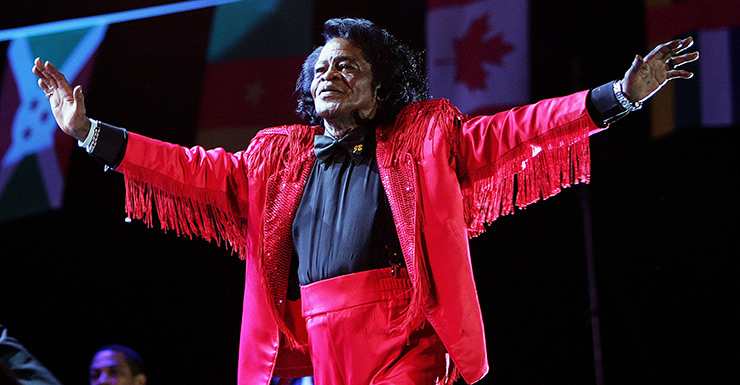 One of the biggest challenges for producers of Get On Up, which launches in US cinemas this week, was attempting to recreate the mad energy of a James Brown gig. His stage performances were always larger than life: part raucous tail-shaker, part primal scream, part evangelist rally. A born showman, Brown would prowl and pirouette across the boards like a man possessed by his own music.

Brown recorded no less than 12 live albums throughout his long career, but his first is the definitive. Recorded at his own expense at a Harlem theatre, Live at the Apollo gave Brown his first smash hit and has been dubbed the “greatest live album ever recorded” by Rolling Stone. This clip of a featured track, dating from a couple of years later, demonstrates the raw power of Brown’s early performances. The outfits appear subdued (given what was to come), but Brown is electric, convulsing to a raucous rendition of a blues standard. Six years earlier, The Ed Sullivan Show refused to film Elvis’s pelvis, worried about shocking middle America. Here, even Brown’s hair looks too dangerous for their tastes.

Brown stretches out his seminal funk single into something utterly hypnotic. As with his best performances, it’s hard to tell here who is in control, musician or music, which adds a compelling sense of drama. All that matters is Brown’s enjoying himself as much as we are. So, it seems, are the back up dancers, who are easily spurred into a bit of dance-wrestling.

Appearing on a 1973 episode of Soul Train, Brown seems in relatively restrained form. Maybe that’s because he’s finally found a back up dancer capable of upstaging him. By this stage, Brown was firmly in funk territory, but it’s his entry to the political arena that makes this clip interesting. Asked why Brown voted for Nixon, he tells the crowd: “Our country cannot survive unless everybody’s making it.” This support for Nixon led to fans spurning Brown’s records and hosting protests at his live shows. Undeterred, Brown went on to back Reagan and appear at Republican fundraisers.

This excerpt from a sweaty, acrobatic performance at the Zaire 74 festival not only captures the energy but also the myth-building that went into a James Brown show. A histrionic MC beats the crowd into a frenzy (these warm ups could sometimes last longer than the gig itself and Brown delivers a self-aggrandising monologue refuting any notion that his career might be on the skids. “Don’t bury me while I yet live,” he growls, “the best of James Brown is yet to come.” And the waiting drums kick into the next song.

After a dalliance with disco, Brown’s star seemed to burn out in the late 1970s. But, by the end of the 80s, he was ready for a revival. A few film appearances, an autobiography and a new record company saw him make a brief return to the charts, but here we find him on the victory lap. Addled by drugs and legal dramas, Brown keeps the mad improvisation on a low flame. He’d never again released a best selling album, but the Godfather would continue touring until his death in 2006.

Get On Up is released in Australia on September 4

Get On Up: New James Brown film a must see