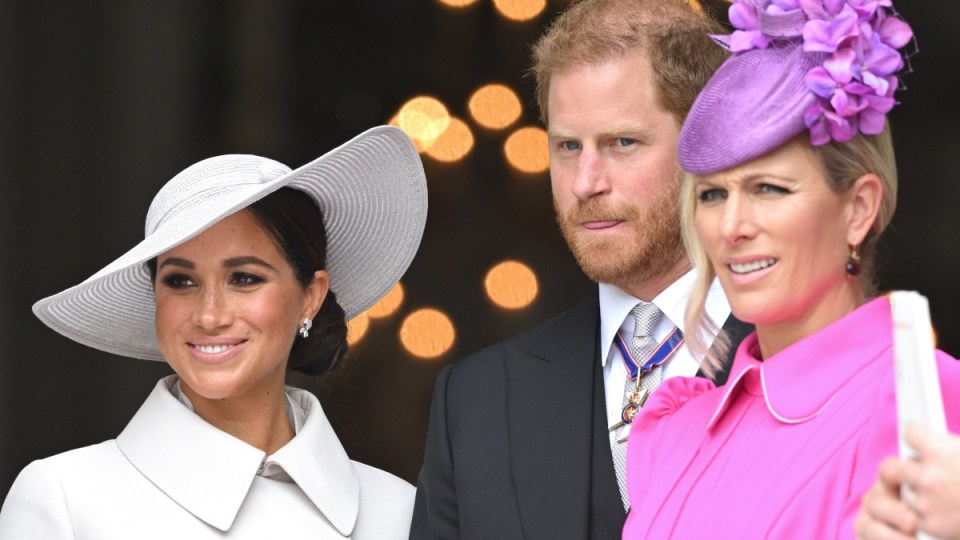 Prince Harry and Meghan Markle with his cousin Zara Tindall at the public service for the Queen last weekend. Photo: Getty

Prince Harry is reportedly “absolutely furious” and seeking an apology after he and wife Meghan Markle were largely sidelined at last week’s platinum jubilee events.

The Duke and Duchess of Sussex made a whirlwind trip to Britain for celebrations to mark the Queen’s 70 years on the throne, but were seen publicly at only one event.

“I think he would have been very, very upset that he was largely ignored,” royal author Angela Levin told Britain’s Sun on Thursday.

Harry and Meghan arrived in London last Wednesday with their children, Archie and baby Lilibet. It was their first return to Britain as a family since they sensationally quit as senior working royals in 2020.

They had no public role in the Trooping the Colour, which opened the four-day celebrations of the Queen’s milestone – being snapped watching the ceremony with other minor royals.

Their only public event was at a service of national thanksgiving to the Queen at St Paul’s Cathedral. But they were seated with other minor royals – including Princesses Eugenie and Beatrice and their husbands, and the Queen’s niece, Lady Sarah Chatto.

There was no contact between Harry and his father, Prince Charles, or his brother, Prince William. Levin believes Harry was angry.

“He wears his emotions on his face and he looked absolutely furious … he could have been feeling lots of things. I don’t know whether he had a wave of feeling at what he had given up,” she told The Sun.

“I think it’s quite interesting really – he could have been feeling lots of things.

“I don’t know whether he had a wave of feeling at what he had given up.

“He is self-destructive and might regret what he has lost.

“Or maybe he was recalling bad memories and was just wishing he hadn’t come at all.”

According to Levin, there was also no private meeting between Harry and William during the Sussexes’ brief stay in Britain. They did meet the Queen, however – and she was introduced to baby Lilibet, who has the monarch’s childhood nickname.

Reportedly, Harry and Meghan hosted a birthday party for Lilibet at Frogmore Cottage last Saturday, inviting the William and his wife, Kate Middleton, to join them.

However the Cambridges did not attend.

“Allegedly, they asked Kate and William and the children to the party,” Levin said.

“However, they didn’t take the trouble of finding out the Cambridges would be in Wales on the morning, and coming back to get ready for the jubilee concert in the afternoon, so they couldn’t go.”

Levin spent a year with Prince Harry, writing a biography of him that was released in 2018 – the year he married Meghan. Despite that relationship, she said it was Harry who owed the royal family an apology.

“He said during the Oprah interview that Charles and William were trapped, he said he’d been cut off by his father,” she said.

“You can’t just go around being rude about people and expecting them to open their hearts to you again.”

There are also reports the Queen put her foot down to two major requests from Harry and Meghan. They are reported to have wanted to bring a Netflix documentary crew on their trip, and a photographer to snap her meeting with her great-granddaughter.

The Queen apparently flat-out refused. The meeting remained private, and the Sussexes later released birthday photos of baby Lilibet (minus the Queen) online.

The Queen’s refusal also has the couple offside with Netflix.

“That image would have been very valuable,” Levin said.

“Netflix wanted them to get photos with senior royals, and bosses aren’t very pleased with them. That’s why they wanted to go to the service at St Paul’s, so they could be seen in public for their Netflix series, but they would have been astonished at their seats.”

The couple returned to California before the jubilee celebrations had even finished – flying out from a London airport as the final pageant was underway.

Prince Harry is also said to still be working on his tell-all memoir. It is meant to be released later this year, although there is no set date so far.