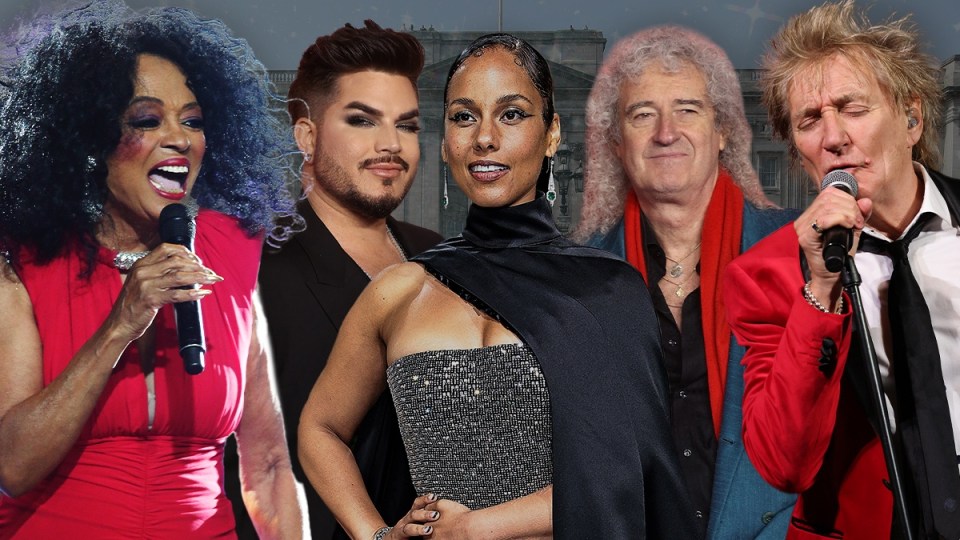 The BBC has enlisted some of the biggest names in entertainment for its Platinum Party, co-hosted by the royal family. Photo: Getty, TND

With just a couple of weeks to go until the Queen celebrates her platinum jubilee, the countdown is well and truly on.

After all, she is the first British monarch to have a platinum jubilee, so expect nothing less than what is fit for a queen.

Enter Diana Ross, Queen (the band, not the monarch) and Adam Lambert, Duran Duran and Sir Rod Stewart, who will all perform at a massive contest celebrating her milestone 70 years on the throne.

And that’s just the tip of the iceberg.

Trooping the Colour, the Queen’s Birthday Parade, is usually held on the second Saturday in June. This year, however, the parade has been brought forward to June 2 to kick off the holiday weekend.

Expect more than 1400 parading soldiers, 200 horses and 400 musicians to mark the occasion. As per tradition, the event will close with an impressive RAF fly-past, watched by the royal family on the iconic Buckingham Palace balcony.

The Queen, 96, has limited the balcony appearance to working members of the family, which means no Prince Andrew, and no Prince Harry and Meghan, Duchess of Sussex.

On June 3, a Service of Thanksgiving will be held at St Paul’s Cathedral in London.

The following day, members of the royal family will attend the Derby horse racing at Epsom. It is simply not a celebration of the Queen unless a great number of horses are involved.

The star-studded Platinum Party at the Palace will also take place on June 4 – more on that later.

Then, on June 5, the grand finale will take centre stage.

The final day of celebrations will be dedicated to the Platinum Jubilee Pageant, which will tell the story of the Queen’s 70-year reign in four parts.

You’ll want to tune in to the final act, in which the big names from the world of performing arts, entertainment, fashion, business and media will pay tribute to the monarch.

Platinum Party at the Palace

Not to be outdone by ITV’s broadcast of A Gallop Through History on Monday, in which the likes of Helen Mirren, Damian Lewis and even Tom Cruise honoured the Queen, the BBC has enlisted some of the biggest names in entertainment for its Platinum Party.

The massive concert isn’t being held inside Buckingham Palace, but in front of it.

If you want an idea of just how big this event will be, the entire front of Buckingham Palace will be projection-mapped, providing a giant screen for the night.

More than 30 musicians will share the three-stage set-up, joined by icons from the sporting world, stage and screen.

Queen and Adam Lambert, Alicia Keys and Hans Zimmer will take to the stage, plus Duran Duran, Andrea Bocelli and Sir Rod Stewart.

On behalf of Queen, guitarist Brian May said the band is very happy to be invited back to perform after playing (on the roof of Buckingham Palace) at the Golden Jubilee in 2002.

“Then there was a moment when I wondered … after Buckingham Palace’s roof where can you go? Well … you will see!”

Stars from the sporting world, including David Beckham and Emma Raducanu will feature, while Sir David Attenborough, Stephen Fry, Dame Julie Andrews and The Royal Ballet will represent the arts.

And even though Sir Elton John is currently on tour, the beloved musician has specially recorded a performance for the Queen.

Composers Andrew Lloyd Webber and Lin-Manuel Miranda will, no doubt, delight viewers with special performances, featuring the casts of The Phantom of the Opera, Hamilton, Six, The Lion King, and Joseph and the Amazing Technicolor Dreamcoat.

Just when you thought there couldn’t be any more, legendary singer Diana Ross will close the show.

Ross said she was “absolutely delighted to receive an invitation to perform” at the event, having also met the Queen several times.

What events will the Queen attend?

Although the Queen’s health struggles have dominated headlines in recent months, she sent a clear statement this week.

After attending A Gallop Through History on Monday, she made a surprise visit to Paddington Station just two days later.

Dressed in sunshine yellow and with her walking stick in hand, the Queen marked the completion of London’s Crossrail project by attending the opening of the Elizabeth Line.

Accompanied by her son Edward, the Earl of Wessex, the Queen was given an Oyster travel card and shown how to use it by staff.

It was a standard public appearance, but considering the Queen had up until very recently cut back on her public duties, her visit attracted more attention than usual.

According to the BBC, she was “looking forward to taking part in celebrations”, but her attendance at many events across the jubilee long weekend won’t be confirmed until a later date.

She, however, “plans to attend” Trooping the Colour and the Service of Thanksgiving.