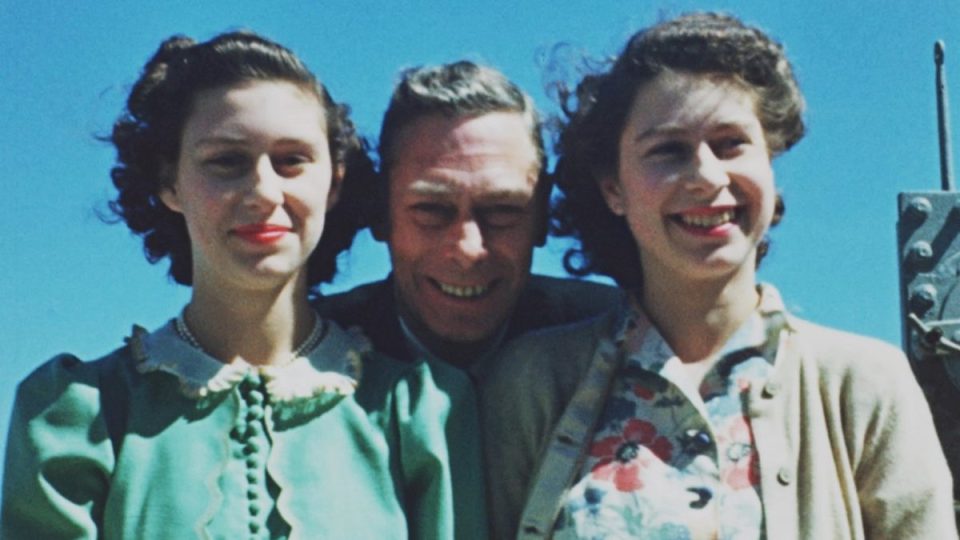 Elizabeth, right, poses with her sister Margaret and their father George VI in a previously unseen photo from the documentary. Photo: BBC

The private home movies of Queen Elizabeth II, filmed by members of the royal family, will be broadcast for the first time ahead of the official Platinum Jubilee celebrations.

Buckingham Palace and the BBC have teamed up on a 75-minute documentary called Elizabeth: The Unseen Queen, full of footage of the monarch, who turned 96 this year.

The private home movies have been tucked away in the vaults of the British Film Institute for decades, but the Queen has granted the BBC unprecedented access to her younger years.

These snippets of her life cover everything from being pushed in a pram as a baby by her mother, to her coronation at the age of just 27 in 1953.

The home videos were recorded by her parents, Prince Philip and other members of the royal family.

BBC Studios produced the documentary, which involved viewing more than 400 reels of film.

The end product is an intimate look at the Queen’s life, including a beaming Princess Elizabeth showing the camera her engagement ring before the news was announced.

Other rare moments include her grandfather George V, or ‘Grandpa England’ as Elizabeth called him, sailing with the Queen Mother off the Isle of Wight in 1931, as well as a “poignant” glimpse of the royal family at Balmoral in 1951.

Ahead of the documentary’s premiere in late May, three never-before-seen images of a young Princess Elizabeth taken from the documentary have been released by producers.

Filmmakers also listened to more than 300 of the Queen’s speeches, spanning eight decades, so the documentary could rely largely on Elizabeth’s own voice and words instead of featured interviews and narration.

“The production team were under no illusion quite how special having access to this very personal archive was,” said Claire Popplewell, creative director for BBC Studios Events Production.

“Being able to draw upon the self-recorded history of a young Princess Elizabeth and her wider family – and allowing the Queen to tell us her own story – is the very heart of this film.”

Celebrating 70 years on the throne

The documentary is a fitting way to preface the official Platinum Jubilee celebrations, a special four-day weekend (June 2 to 5) chock-full of events.

The parade is usually held on the second Saturday of June, but this year’s extravaganza has been shifted to June 2 to mark the beginning of the long weekend.

The palace has confirmed Elizabeth will appear on the balcony, alongside members of the royal family who are “currently undertaking official public duties” on behalf of the Queen.

That means no Prince Andrew, or Prince Harry and Meghan, Duchess of Sussex.

On June 3, a Service of Thanksgiving for the Queen’s reign will be held at St Paul’s Cathedral in London.

Come June 4, members of the royal family will attend the Derby at Epsom Downs, followed by the Platinum Party at Buckingham Palace.

The Platinum Jubilee Pageant, the grand finale of the weekend, will take place on June 5.

It will feature appearances and performances by a handful of British icons from music, film, sport and the arts, including Ed Sheeran.

More than 10,000 people are involved in the pageant, including the military, over 6000 volunteers, performers and key workers, plus 2500 members of the general public.

Elizabeth, who has been experiencing mobility issues in recent months, plans to attend some of the Jubilee events, but the palace said her appearances won’t be confirmed until a date closer to the weekend.

Elizabeth: The Unseen Queen will premiere in the UK on BBC One and BBC iPlayer on May 29

‘Self-recorded history’: The Queen’s home movies will feature in a new BBC documentary