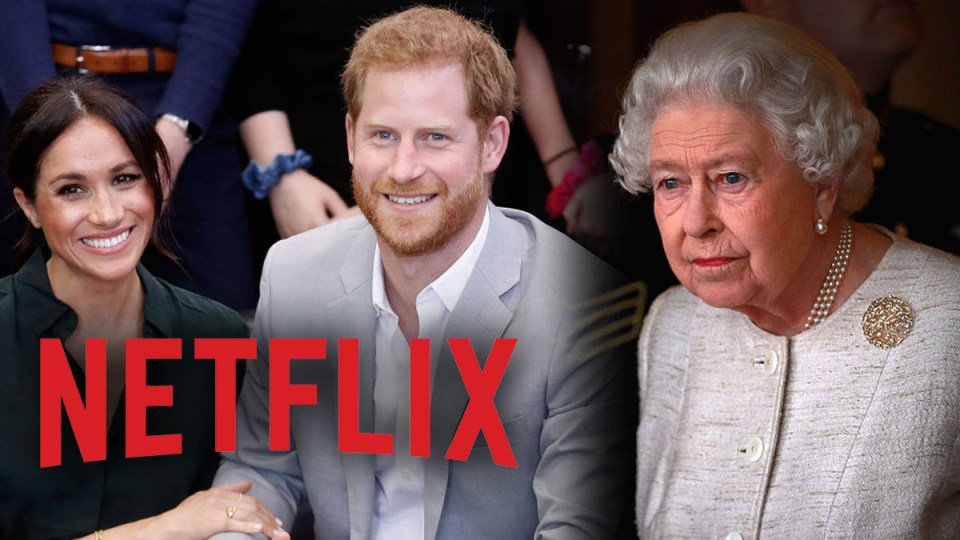 The palace is reportedly worried that Harry and Meghan's Netflix cameras will cause a major distraction.

The Queen’s Platinum Jubilee will be attended by thousands of well wishers and broadcast to millions more around the world.

But one television crew is on the Palace’s watch list.

In another sign of the long-lasting rift between the royal family and  Harry and Meghan Markle, royal insiders have said a team of palace “minders” will be on hand over the jubilee weekend to block streaming giant Netflix from filming Harry and Meghan attending the celebrations.

The couple have a deal with the platform thought to be worth more than $190 million.

But although the royal family is said to be delighted about Harry and Meghan’s attendance, they fear the couple and the Netflix cameras following them could “exploit their opportunities”.

“The worry is they will push it and try to gain access to areas of jubilee celebration events where they can film Harry and Meghan and their children,” a Buckingham Palace source told The Sun newspaper.

“Even if they accept that their Netflix crew can’t go into Buckingham Palace to film, they could cause problems – and at the very least cause a major distraction.

“Senior courtiers believe that Netflix will see it as one big opportunity to exploit their mega-millions agreement with the couple.

“So a team of palace aides will be on standby to keep a very close eye on the crew, and act as minders if needs be.”

It comes after Buckingham Palace confirmed this weekend that only ‘working royals’ would join the Queen on the Palace balcony at the end of the Trooping the Colour parade, which kickstarts the Platinum Jubilee celebrations on June 2.

“After careful consideration, the Queen has decided this year’s traditional trooping the colour balcony appearance on Thursday, 2 June will be limited to Her Majesty and those members of the royal family who are currently undertaking official public duties on behalf of the Queen,” the Palace said in a statement.

That means up to 20 members of the extended royal family will miss out, including the Queen’s second son Andrew.

Andrew’s stock plummeted after he settled a US lawsuit in February in which he was accused of sexually abusing Virginia Giuffre when she was a teenager.

He had already stepped down from public duties because of his connections to the late convicted US sex offender Jeffrey Epstein and has been stripped of military titles and royal patronages and is no longer known as “His Royal Highness”.

Harry also gave up royal duties and lost his patronages after moving with Meghan to Los Angeles, from where they have delivered barbs and accusations of racism against the royal household.

Harry has also been in an ongoing dispute with the British government over security arrangements.

He skipped a memorial service in March for his grandfather Prince Philip, but will return for the jubilee.

His spokesperson confirmed he would be there with Meghan and their children, son Archie (who has just turned three) and daughter Lilibet.

The little girl, who was given the Queen’s childhood nickname, has her first birthday on June 4.

It will be Lilibet’s first visit to Britain, and the first time son Archie has returned since Harry and Meghan sensationally quit as working royals and left the country in March 2020.

The remainder of the long weekend of celebrations will include a thanksgiving service at St Paul’s Cathedral, a concert outside Buckingham Palace, and a pageant through the British capital on subsequent days.

The Queen, who celebrated her 96th birthday a fortnight ago, has been struggling with mobility issues, and most of her recent public engagements have had to be cancelled.

On Friday, the palace confirmed that she would not attend any of this year’s official garden parties – the first scheduled after a two-year gap for the pandemic.

But it said the monarch did plan to be at some of the platinum jubilee events.

“Her Majesty is looking forward to the weekend and will be taking part in the celebrations,” a spokesperson said.

“But her presence will not be confirmed until much nearer to the time or even on the day itself.”