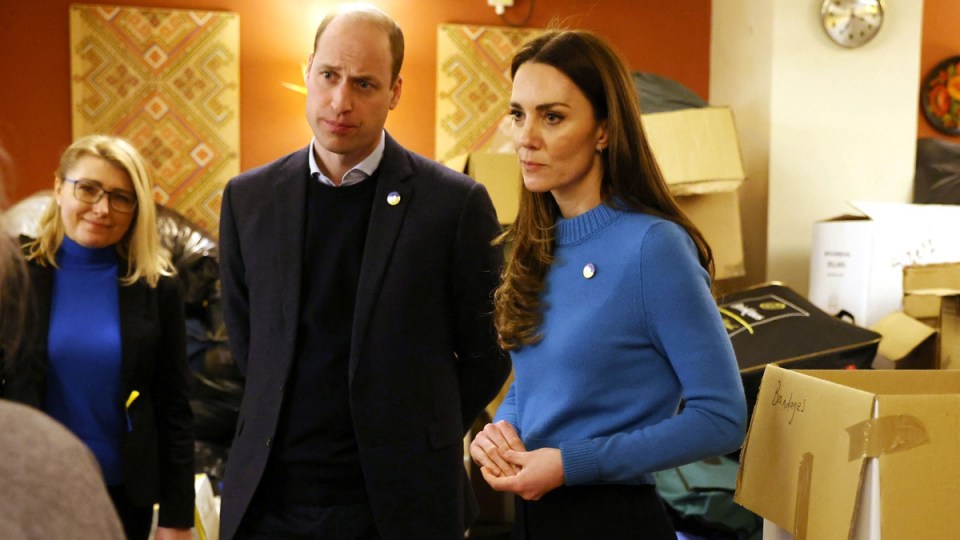 Prince William is being roasted online after comments he is reported to have made about the Ukraine invasion were lashed as “ignorant”.

William apparently made the remarks on a visit to a Ukrainian cultural centre in London on Thursday, with wife Kate Middleton.

The Cambridges were there to meet volunteers and hear about ongoing aid efforts for Ukraine. The duchess even brought home-baked sweet treats to share with the volunteers, and appeared visibly moved at times by their stories.

Footage from the event showed that the prince said: “Everyone is horrified by what they are seeing. The news every day, it’s almost unfathomable to actually witness it, to see it.

“For our generation, it’s very alien to see this in Europe. We’re all right behind you.”

But William’s comment was misheard by a reporter on the ground.

It then took on a life of its own after being called out by Omid Scobie, who co-wrote a biography on Prince Harry and Meghan Markle. He accused William of being “ignorant” and said the remark helped to “normalise war and death in Africa and Asia”.

“Unsurprised to see backlash against Prince William’s ignorant remark (reported by @PA). Europe has seen some of the bloodiest conflict in the past two centuries – Balkans, Yugoslavia, Germany and Kosovo to name a few,” the Finding Freedom author wrote in a now-deleted tweet.

“But sure, let’s normalise war and death in Africa and Asia.”

From there, the outrage spiralled.

CNN host Jake Tapper told his 3.3 million Twitter followers that Prince William should to “read a book about your own family, dude” – in a tweet accompanied by a photo of the Duke and Duchess of Windsor meeting Adolf Hitler.

Others said William’s comments were further evidence of racism in the royal family, a year after Harry and Meghan told Oprah Winfrey someone in the family had expressed “concerns” about the colour of their then unborn son’s skin.

“How do you have a 1000-year history of colonialism, a literal 100-year war, launch 2 World Wars, allow multiple genocides, and bomb a dozen nations since 9/11 alone – yet make this type of a statement?” he tweeted.

Others pointed out the extensive conflict in the Balkans in the 1990s – including that William’s mother Princess Diana had visited war-torn Bosnia in the mid-1990s, campaigning against deadly landmines.

But the comments were later clarified, with the reference to Africa and Asia removed. Royal reporter Richard Palmer apparently took responsibility for the error and apologised, hours after the prince’s remarks went viral across Twitter.

Video evidence from British TV network ITV shows that what William actually said was: “Everyone is horrified by what they are seeing. It’s really horrifying.

“The news every day, it’s just, it’s almost unfathomable. For our generation, it’s very alien to see this in Europe.

“We’re all right behind you. We’re thinking about you. We feel so useless.”

Scobie, however, has refused to backtrack.

“It wasn’t my reporting and saying it’s alien to see war in Europe is still an ignorant remark. So no,” he told Britain’s Telegraph newspaper.

The Cambridges’ visit this week followed a rare public political comment from them, supporting Ukraine as the Russian invasion began.

“In October 2020 we had the privilege to meet President (Volodymyr) Zelenskiy and the First Lady to learn of their hope and optimism for Ukraine’s future,” William and Kate said on Twitter in late February.

“Today we stand with the President and all of Ukraine’s people as they bravely fight for that future.”

Preparing your tax return? Here are the COVID-19 tax deductions you may not have heard about
‘My fictional alter ego’: Camilla meets the actor who played her in The Crown
Today's Stories