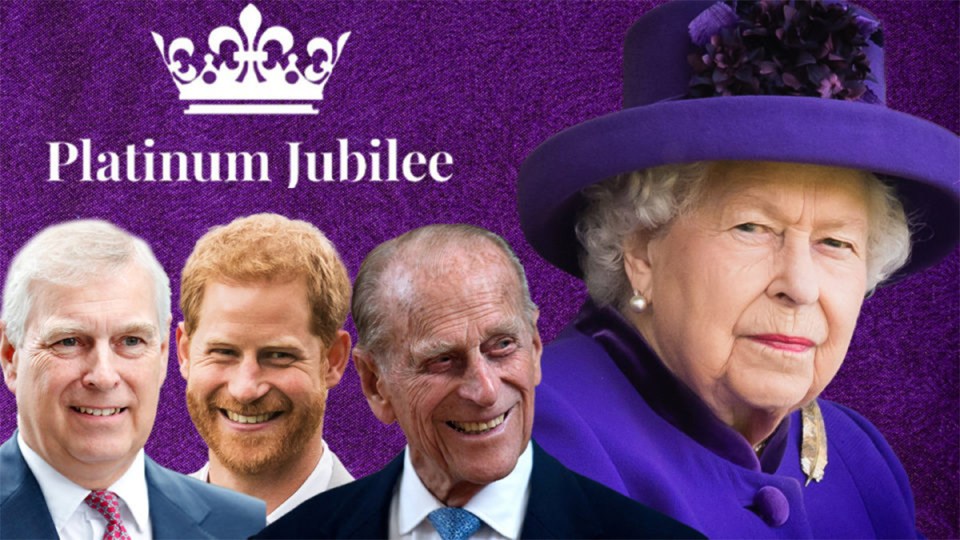 The Queen will soon become the first British monarch to celebrate 70 years on the throne, and she will do it dogged by controversy.

Decades ago, upon celebrating her ruby jubilee in 1992, Her Majesty reflected on the year she described as annus horribilis – a horrible year.

Her son Prince Andrew separated from his wife, while her daughter Princess Anne divorced her husband.

And then Princess Diana published her tell-all memoir, detailing the problems in her marriage to Prince Charles.

Thirty years later, the 95-year-old monarch’s biggest celebration is once again being marred by scandal.

The Queen, who lost her husband of more than 70 years in April, has had the months leading up to her platinum jubilee overshadowed by her ‘favourite’ son’s ties with convicted sex offenders.

All eyes turned to Prince Andrew after his friend Ghislaine Maxwell was convicted of recruiting girls for abuse by the late convicted sex offender Jeffrey Epstein.

Last August, Virginia Giuffre sued the prince in New York, claiming that he sexually abused her in 2001 when she was 17.

Ms Giuffre alleges she was trafficked by Epstein to his friends, including Andrew.

The royal has consistently denied the allegations.

Despite his attempts to have the lawsuit thrown out, Prince Andrew will likely face trial later this year.

Andrew, who had already stepped back from royal duties in 2019, recently returned his military titles and royal patronages to the Queen.

He has also stopped using ‘His Royal Highness’ in an official capacity.

Andrew faced more bombshell claims on Tuesday after a former royal police officer suggested the Duke of York may have dated Maxwell.

Speaking in a new ITV documentary about the royal’s friendship with Epstein, ex-Buckingham Palace guard Paul Page said Andrew and Maxwell were likely more than friends.

Mr Page said Maxwell was a regular visitor from 2001.

“From the way she was allowed to enter and exit the palace at will, we realised – suspected – that she may have had an intimate relationship with Prince Andrew,” Mr Page said in the Ghislaine, Prince Andrew and the Paedophile documentary.

Although not comparable to the allegations against Prince Andrew, the Duke of Sussex’s upcoming memoir is bound to ruffle some feathers.

The currently untitled book by Prince Harry is expected to come out in late 2022.

“Prince Harry will share, for the very first time, the definitive account of the experiences, adventures, losses, and life lessons that have helped shape him,” publisher Penguin Random House announced in July.

The memoir covers his lifetime in the public eye from childhood to present day, as well as his life as a husband and father.

“I’m writing this not as the prince I was born but as the man I have become,” Prince Harry said.

“I’m deeply grateful for the opportunity to share what I’ve learned over the course of my life so far and excited for people to read a first-hand account of my life that’s accurate and wholly truthful.”

Prince Harry and the legal bid for security

Prince Harry has challenged a government decision preventing him from paying for his own security on British soil, a legal representative for the Duke and Duchess of Sussex confirmed.

In response to a leak in a British tabloid, a spokesperson for Harry and wife Meghan Markle said it was necessary to release a statement setting the facts straight.

Prince Harry forfeited his taxpayer-funded police security when he stepped back from the royal family in early 2020.

As it stands, Harry and Meghan pay for their security team in the US.

But their private security team can’t perform to the standard of British police which has access to local intelligence and legal jurisdiction.

“Prince Harry inherited a security risk at birth, for life,” his spokesperson said.

“He remains sixth in line to the throne, served two tours of combat duty in Afghanistan, and in recent years his family has been subjected to well-documented neo-Nazi and extremist threats.”

Prince Harry argued that while his position within the institution has changed, his profile as a member of the royal family has not.

“Nor has the threat to him and his family.”

In July, Harry’s car was chased by photographers as he left an event in London. He and Prince William had unveiled a statue in honour of their late mother Princess Diana.

After at least two rejected attempts at negotiations, the prince sought a judicial review in September to challenge the decision making behind the security procedures.

It begs the obvious question of whether Harry will attend his grandmother’s celebrations.

About 400,000 medals commemorating the Queen’s 70-year reign will be awarded to front-line workers, those in emergency and prison services and armed forces.

But The Mirror reports Andrew and Harry will miss out on the commemorative medals.

As both royals no longer use their honorary titles, they aren’t eligible for the honour.

The Queen will mark 70 years on the throne on February 6, with year-long celebrations to follow.

The Queen’s biggest celebration is once again marred by scandal