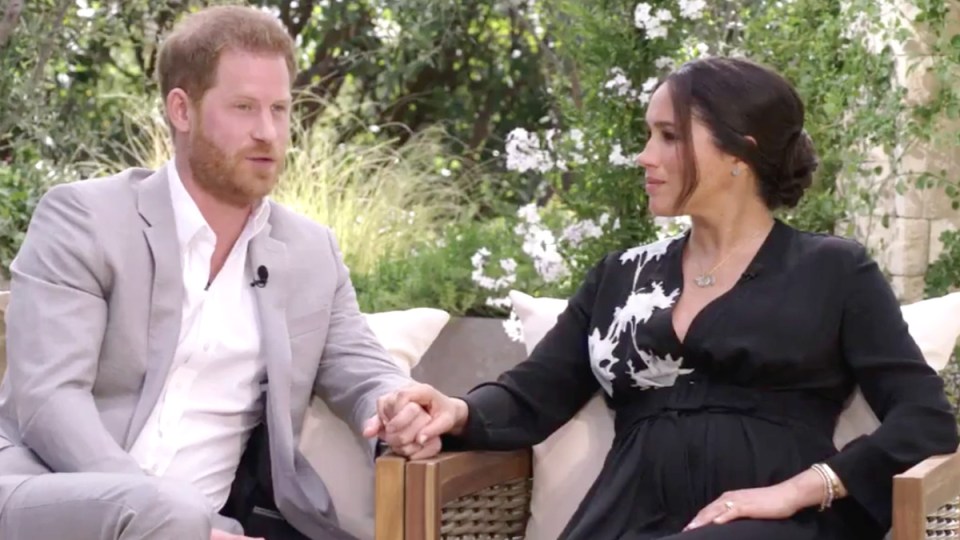 The clip – which aired on US television on Sunday night – shows Prince Harry holding hands with a clearly pregnant Meghan, as he speaks about his late mother, Princess Diana.

The interview was apparently filmed at the couple’s Santa Barbara home, which they share with young son Archie.

The pair hold hands as Harry – who has spoken often of his heartbreak at the death of his mother Princess Diana – tells Winfrey, “my biggest concern was history repeating itself”.

Meghan, wearing a belted Giorgio Armani gown that sells for $6000, doesn’t speak during the short promo.

But Winfrey hints at some bombshell revelations from the Duke and Duchess of Sussex in her quotes.

“I just want to make it clear to everybody there is no subject that’s off limits,” the TV host adds.

She follows that up with:“Almost unsurvivable sounds like there was a breaking point.”

Meanwhile, Harry reveals more about his grief for his mother, making it clear he still mourns her death.

“I’m just really relieved and happy to be sitting here talking to you with my wife by my side because I can’t begin to imagine what it must have been like for her going through this process by herself all those years ago,” he tells Winfrey.

“Because it has been unbelievably tough for the two of us, but at least we had each other.”

Winfrey’s interview will show in the US as a two-hour primetime special to air on Sunday, March 7.

It reportedly begins with Winfrey asking Meghan about everything “from stepping into life as a royal, marriage, motherhood, philanthropic work to how she is handling life under intense public pressure”.

The prince will then join his wife, and the couple will discuss “their move to the United States and their future hopes and dreams for their expanding family”.

“It is in-depth and fascinating,” one source told Page Six.

Harry and Meghan stepped away from full-time royal life in March 2020, unhappy at media scrutiny and the strictures of their roles.

They cited what they described as the intrusions and racist attitudes of the British media toward the duchess, who is African-American.

It was agreed the situation would be reviewed after a year.

On Friday, Buckingham Palace confirmed the couple would not return to royal duties and Harry will give up his honorary military titles – a decision that makes formal, and final, the couple’s split from the royal family.

A spokesperson for the couple hit back at suggestions that Meghan and Harry were not devoted to duty.

“As evidenced by their work over the past year, the Duke and Duchess of Sussex remain committed to their duty and service to the UK and around the world, and have offered their continued support to the organisations they have represented regardless of official role,” the spokesperson said in a statement.