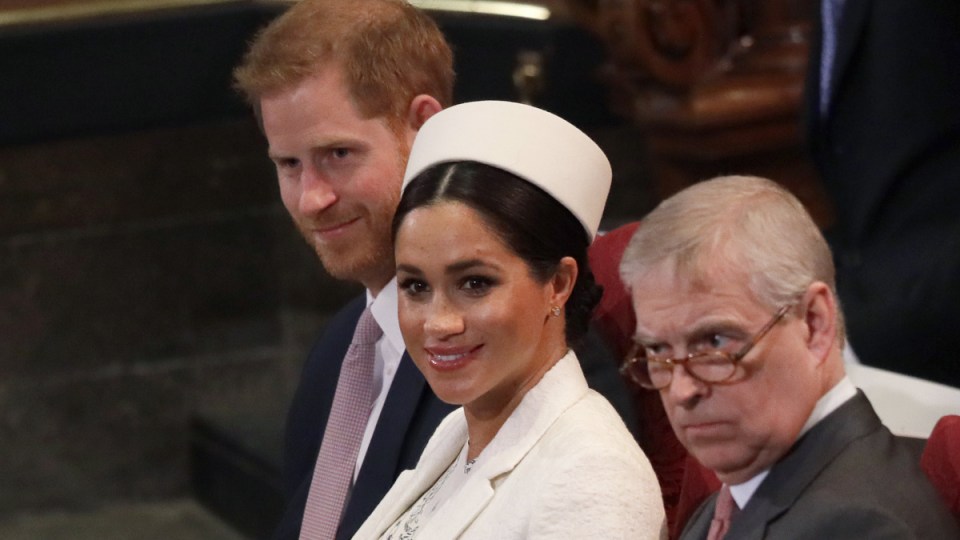 Prince Andrew may lose his royal title, as Harry and Meghan drop theirs for an upcoming special. Photo: Getty

Prince Harry and Meghan Markle are set to appear in a TIME Magazine TV special, but they’ll be missing one notable detail.

The Duke and Duchess of Sussex have opted to ditch their royal titles and go by ‘Harry and Meghan’, as they continue their transformation from British royalty to Hollywood celebrities.

This will be the first time the publication’s renowned list of 100 most influential people will be televised.

Airing on September 22, the special will feature in-depth profiles and interviews with “leaders, creators and everyday heroes”.

The promotional video introduced the pair without their formal titles, a move encouraged by the Sussexes since they stepped down as senior royals.

But it’s not just the Sussexes forgoing the formalities.

Prince Andrew may be facing the possibility of losing his own royal title, following his highly publicised affiliation with the late convicted pedophile, Jeffrey Epstein.

With his father, Prince Philip’s 100th birthday looming next year, rumours have swelled that Prince Andrew’s official duties and responsibilities for the event would be scrapped.

Royal commentators have suggested the loss of the Prince’s title isn’t far off, as the family try to distance themselves from the scandal.

Birthday messages to the disgraced Duke in February sent by the the Royal Family’s social media accounts also excluded his HRH title.

“The survival of the monarchy requires that Buckingham Palace backs away,” Nigel Cawthorne, author of Prince Andrew, Epstein and the Palace said.

“It is a poignant moment, and the loss of Prince Andrew’s HRH title is highly likely merely a matter of time now.”

And while Prince Philip is reportedly “extremely fond and very proud of his son”, he also “knows that Andrew’s name is poison currently”.

This comes after the Duke of York was notably absent from daughter Beatrice’s wedding photos.

Prince Harry celebrated his 36th birthday on Tuesday, marking his first living in the US.

Warm wishes poured in from across the pond via social media, with the Duke and Duchess of Cambridge sharing a lighthearted photo of the three racing towards a finish line.

Markle marked the occasion by donating to CAMFED, an organisation working to eradicate poverty in Africa by empowering and educating girls.

A statement released by the couple said they could think of “no better way to celebrate what really matters”.