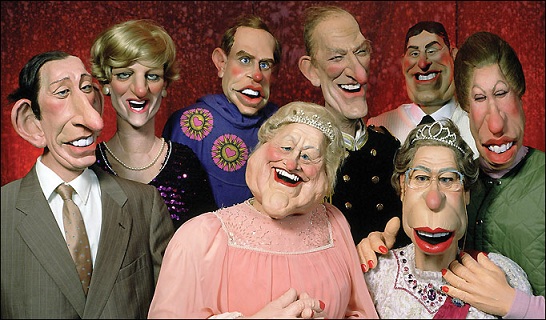 Prince Andrew has been accused of using a caricature puppet of himself, gifted by pedophile Jeffrey Epstein and his former girlfriend Ghislaine Maxwell, to grope Virginia Giuffre and another woman.

The doll was from 1980s British satirical comedy series, Spitting Image, which featured puppets of celebrities and prominent public figures.

The accusation is made in Ms Giuffre’s unpublished memoir, which was released by New York Judge Loretta Preska as part of a series of documents made public following Maxwell’s arrest for her alleged involvement in Epstein’s pedophile ring.

In her manuscript, Ms Giuffre writes the incident took place in April 2001, around the time she first met Prince Andrew at Epstein’s Manhattan home.

“He looked me up and down like a shiny new car on display and he was about to take it for a test drive,” Ms Giuffre wrote.

“It was easy to give them the reaction they desired, all I had to do was pretend to be entertained by their lewd gestures, and when Andrew cupped my breast with a doll made in his image, I only giggled away.

“Ghislaine wanted to take a picture of the bizarre scene and even got Johanna [Sjoberg], another one of Jeffrey’s so-called personal assistants to come sit on his other knee for the snapshot.”

Prince Andrew has yet to comment on these fresh allegations but has long denied any association with Ms Giuffre.

As the Epstein, Maxwell and Prince Andrew saga continues, it seems the rest of the royals are eager to distance themselves from the disgraced Duke of York.

Keeping up appearances in Wales, Prince William and Kate Middleton let out their competitive sides and enjoyed an afternoon at an arcade on Barry Island.

The couple were visiting the summer hotspot in an effort to promote the area after the coronavirus pandemic saw many local businesses close.

Trying their hand at mini basketball and the claw machine, the Duke and Duchess of Cambridge were full of laughs but ultimately came away empty-handed.

The pair also spent time chatting with local business owners about the economic impact the lack of tourism has had on their community.

Prince William and Kate have visited Barry Island where they joined in with children playing at an amusement arcade.

They royal couple also spoke with local business owners about the impact Covid-19 has had on the seaside resort.#PrinceWilliam #KateMiddleton #BarryIsland pic.twitter.com/RbRBLOpC5g

Prince Harry, who heads environmental tourism initiative, Travalyst, has spoken frequently about the pandemic’s devastating impact on the tourism industry and the need to “build back” the local economies that rely on it.

Tourism seems to be the topic of the hour, with the Queen doing her part by opening up some of the most private areas of one of her estates.

Windsor Castle, which was the location of Prince Harry and Meghan Markle’s 2018 wedding, will open doors to the East Terrace Garden – which has been closed to the public for the last 40 years.

The garden was originally constructed by King George IV between 1824 and 1826 to replace Prince Charles II’s bowling green from the 1670s.

🌱🥀The East Terrace Garden at Windsor Castle. From Saturday, 8 August, the East Terrace Garden at Windsor Castle, created by George IV in the 1820s, will open to the public at weekends for the first time in 40 years. In the 19th century, Prince Albert, consort of Queen Victoria, took particular interest in the garden’s planting scheme, and in the early 20th century, King Edward VII and Queen Alexandra held large garden parties there each summer. In 1971 The Duke of Edinburgh redesigned the flowerbeds and commissioned a new bronze lotus fountain based on his own design for the centre of garden. Swipe ⬅️ to see The Queen and The Duke of Edinburgh pictured in the East Terrace Garden in 1997 by Patrick Lichfield. 🌺The Castle’s Moat Garden beneath the iconic Round Tower, will also open for visitors and young children to join family activities on Thursdays and Fridays in August. This secluded informal garden is thought to date from the reign of Edward III, and it is believed that Geoffrey Chaucer used it as the setting for The Knight’s Tale, the first story from The Canterbury Tales. Head over to @royalcollectiontrust to find out more about The East Terrace Garden and Moat Garden, and how you can visit.

During WWII, Princess Margaret and the then-Princess Elizabeth used a small section of the space to grow their own vegetable garden, producing tomatoes, beans and corn.

But don’t expect to see a homegrown veggie patch today.

Prince Philip oversaw a large-scale renovation project in the early 1970s that introduced the bronze lotus fountain which remains at the centre of the garden to this day.

The Queen’s decision to allow visitors to the East Terrace Garden is likely related to the pandemic and will give tourists the opportunity to explore the grounds safely in the open air.

There is no word  on whether Melania Trump will be employing the services of Prince Philip to assist with her own White House garden restoration across the pond.

Prince Andrew’s groping puppet revealed, as Will and Kate go toe to toe