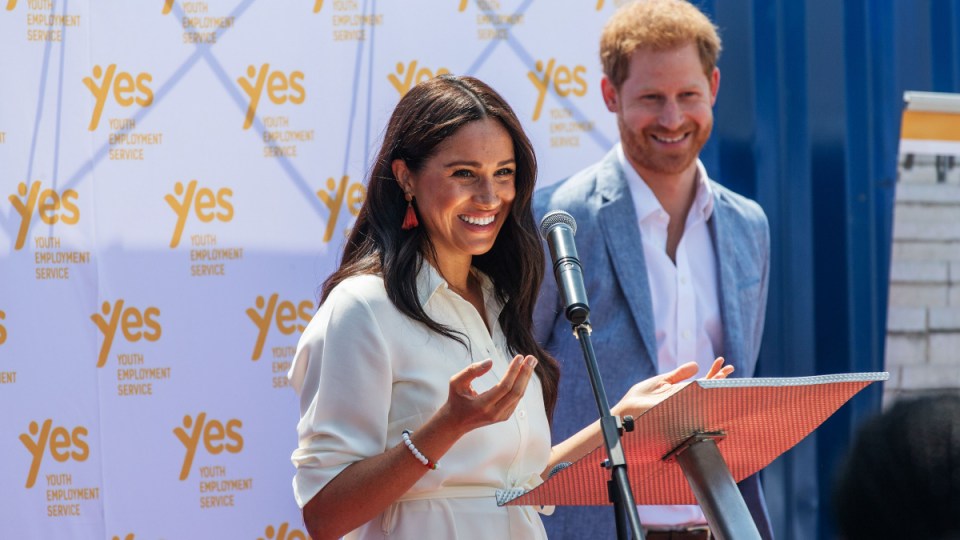 Prince Harry and Meghan Markle have taken the next step in their post-royal careers by signing with a keynote speaking agency.

Harry Walker Agency, which is based in New York, also represents other big names close to the couple, including Oprah Winfrey, the Clintons and Barack and Michelle Obama.

The deal will see the pair deliver keynote speeches at community forums, trade associations, corporations and colleges and will allow the young royals to continue their charitable endeavours during the pandemic.

The runaway royals continued their philanthropic efforts on Thursday by donning gloves, face masks and hair nets as they helped out in the Homeboy Industries kitchen.

The charity organisation seeks to help the lives of formerly gang-affiliated and incarcerated people in Los Angeles.

The Homeboy Industries founder, Father Greg Boyle, said the two weren’t afraid to knuckle down and lend a hand.

“The Duke and Duchess of Sussex were just ‘Harry and Meghan’ to the homies,” Boyle said.

“They rolled up their sleeves and deeply engaged with our workers in the bakery and café. It was immediate kinship and heartening in its mutuality.”

Boyle and Meghan have a long history together, working closely alongside one another at Immaculate Heart high school, where Meghan was once a student.

Earlier this month, Meghan made an emotional address to the graduating class at Immaculate Heart via video conference, touching on issues of race and inequality in the United States.

“What is happening in our country and in our state and in our hometown of LA has been absolutely devastating,” she said.

“I wanted to say the right thing and I was really nervous that I wouldn’t, or that it would get picked apart.

As their philanthropic calendars continue to fill up, Prince Harry has taken some time to let us know what he and young Archie are missing the most from pre-pandemic life – and it’s not what you might think.

“We miss rugby” said the Duke of Sussex in a video posted by England Rugby.

Despite being on hold since March 20, Prince Harry said the setback “hasn’t taken away our spirit”.

Meanwhile, it seems that things are slowly getting back on track for the royals at home in Britain, who have also resumed public engagements.

Talking COVID-19 vaccines💉 , The Duke of Cambridge visited the Oxford Vaccine Group today to learn about the progress made in protecting people against coronavirus. Oxford researchers have developed a vaccine with clinical trials currently underway to establish whether the vaccine generates immunity in humans. Yesterday, The Duke joined members from the AstraZeneca-Oxford partnership to hear the science and innovation at the heart of the global response to the pandemic. Watch the full discussion through the link in our bio

On Thursday, Prince William made an appearance on the frontlines of the fight against the COVID-19 pandemic.

The Duke of Cambridge attended the Oxford Vaccine Group at the University of Oxford to learn more about the clinical trials that are currently testing a potential coronavirus vaccine.

In addition to a tour of the facilities, Prince William was introduced to some of the clinical trial participants who have been involved since testing began on April 23.