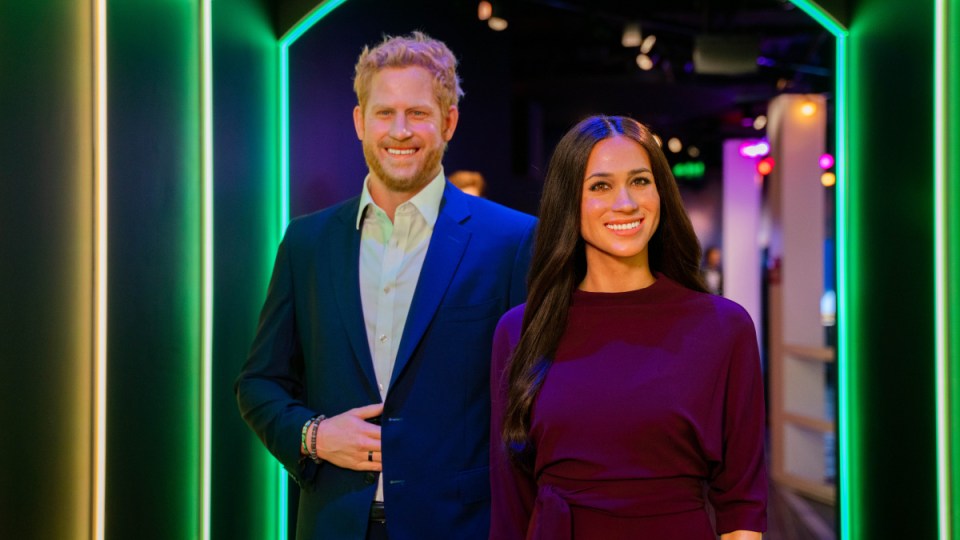 Harry and Meghan have arrived at their welcome party in Darling Harbour Photo: Madame Tussauds

Stepping away from the tradition and protocol of royal life can’t have been an easy decision.

But once the ex-royals made the decision, it was time to get out of the Royal Academy.

Sorry, did we say ex-royals? We meant wax royals.

The Duke and Duchess of Sussex have left royal life behind, so why shouldn’t their wax counterparts do the same?

WATCH: Famous wax collection Madame Tussauds moves the wax figures of Prince Harry and Meghan Markle away from the rest of the royal family at the London museum. Full story: https://t.co/LYniy798fu pic.twitter.com/kvcMeJnvXd

The couple has shifted out of the Royal Academy, which they shared with Queen Elizabeth and HRH Prince William and Catherine, and down the hall to the Party Zone.

Meghan is finally letting her hair down, Harry’s tie is off and the two of them are rubbing shoulders with the A-listers.

The couple’s new high-profile neighbours include Adele, Nicole Kidman, Katy Perry, Elton John and other celebrities – so of course there had to be a red carpet welcome party.

Rumour has it they popped the champagne, but we’re not sure how they managed it.

Harry and Meghan enjoy the party life in Darling Harbour