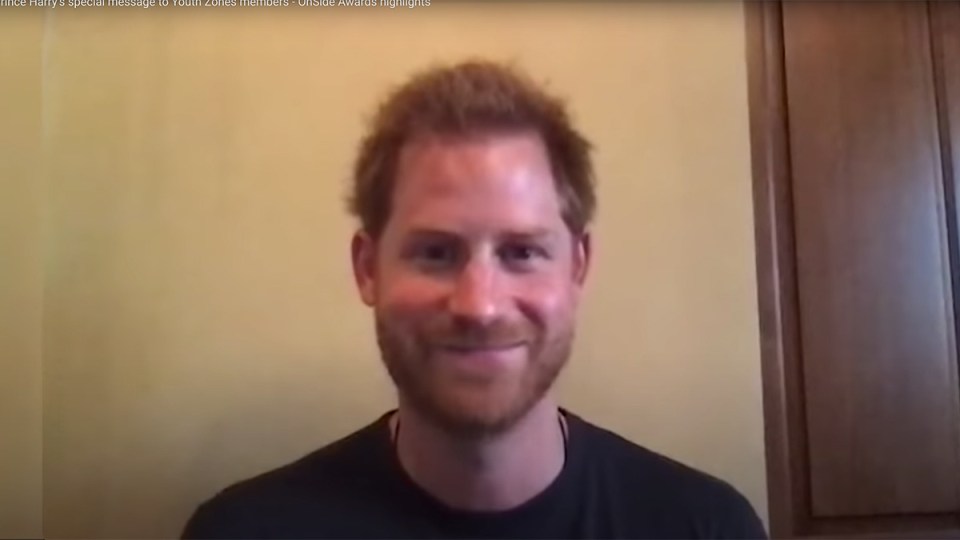 The Duke of Sussex delivers praise to youths in his video message. Photo: OnSide Youth Zones

The Duke of Sussex has praised young British people for surviving and thriving amid the coronavirus pandemic.

Harry delivered a video message to members of OnSide Youth Zones, saying of the situation: “This too shall pass”.

The charity provides state-of-the-art youth centres across the UK and, during lockdown, has been supporting more than 50,000 young people remotely via phone calls and over social media with digital and interactive content.

Introducing an online re-run of OnSide’s award ceremony from November, Harry said: “Hats off to every single one of you for surviving but also for thriving”.

Prince Harry gives an exclusive message to Youth Zone members as he introduces our #OnSideAwards stream, saying: “Wow, what a night that was, I remember meeting so many incredible people and hearing your stories.”
Watch it here 👉 https://t.co/7niK3BnM5h pic.twitter.com/BX1q4E8dKI

“These daily challenges that you guys are coming up against are unbelievable and so many people will never understand,” Harry said.

“But you guys have the strength to pull through and you have the support of the OnSide community, the OnSide family, to help you through that process.

“I can only imagine the last six weeks has made it even more challenging.

“This too shall pass. And before you know it, you will be back together again, probably in a youth zone, running around having the best time ever.”

The duke, who is living in Los Angeles, has stepped down as a senior working royal to pursue a life of financial and personal freedom away from the monarchy.

He delivered a speech and handed out accolades at the OnSide Awards last year at the Royal Albert Hall in London.

It was his final public appearance before a six-week break with the Duchess of Sussex and their son Archie Mountbatten-Windsor in Canada over Christmas, ahead of the Megxit crisis.

Meanwhile, the Queen has congratulated thousands of charities for raising more than STG10 million ($19 million) in lieu of the London Marathon.

The sum makes the 2.6 Challenge, which was put on after the postponement of the race on April 26, the biggest collective fundraising attempt in the UK.

The challenge encouraged people across the nation to get involved in all sorts of activities, from running to swimming, fancy dress and cocktail making, using the numbers two and six.

It aimed to raise money to help save charities which would lose out financially from the cancellation, and was backed by 3691 organisations.

Fifteen days after the challenge began, more than STG10 million has been raised, prompting a message from the Queen.

A letter sent to Sir John Spurling, chairman of London Marathon Events, read: “Congratulations and warmest good wishes to you and all those involved”.

‘This too shall pass’: Prince Harry praises youth resilience in video pandemic message