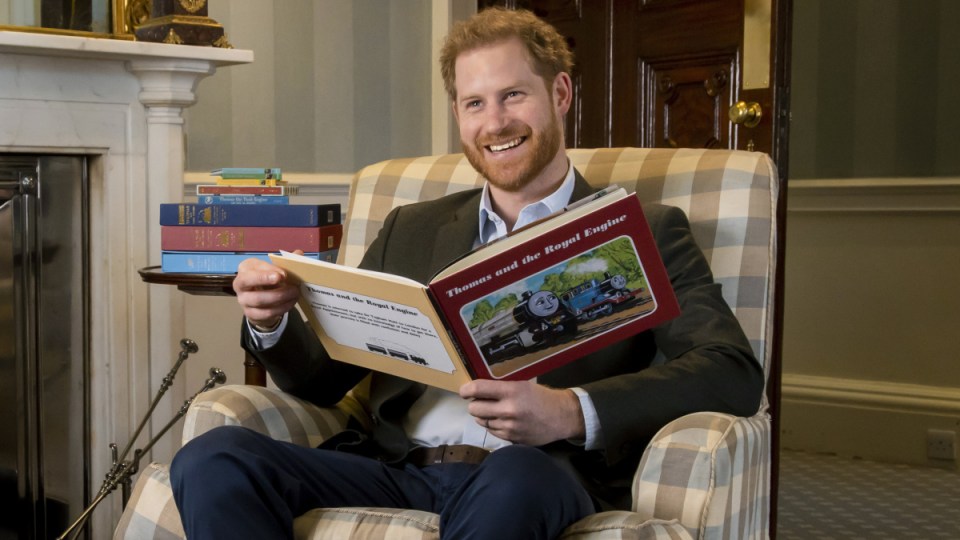 Prince Harry revealed Thomas the Tank Engine was one of his favourite childhood shows. Photo: AAP

The 35-year-old spoke of the meaningful impact the beloved British show has had on children for the past seven decades.

“Thomas the Tank Engine has been a comforting, familiar face to so many families over the last 75 years – entertaining, educating and inspiring children on important issues through exciting stories and characters,” Prince Harry said.

“I certainly have fond memories of growing up with Thomas & Friends and being transported to new places through his adventures.

“I am very proud to have been asked to take part in this special episode. I wish Thomas & Friends a very happy anniversary.”

Harry filmed the segment back in January, with a special royal episode following Thomas as he drives the Fat Controller to England meet the Queen herself.

It appears the Duke of Sussex’s other half has also been busy.

A video showing Meghan Markle’s kind, inspiring words to a potential intern has been shared online.

The Duchess of Sussex was reportedly mentoring the young woman via video chat as part of her charity work with Smart Works.

“You seem incredibly confident and prepared and I know everyone here is so excited,” Markle told the woman.

“There is so much going on in the world right now and just to be such a beacon of hope and focusing on getting through it.

“All the positivity I just want to send your way to make sure you get on the other side of this.”

The Sussexes have been regular fixtures on the US philanthropic scene since their arrival in mid-March.

Princess Eugenie has also been doing the charity rounds and was spotted dropping off meals to the Imperial College, a research university in London.

#PrincessEugenie and husband Jack Brooksbank are showing their support for healthcare workers.https://t.co/2oQ9ti129T

The pair, who were also seen delivering food to NHS workers back in early April, have just celebrated their 10th anniversary together.

“Jack and I are celebrating our 10th anniversary today,” Princess Eugenie wrote on Instagram, before inviting followers to share their own anniversary stories.

“We are lucky enough to be together at this time.”

“If anyone has an anniversary this week, if you are together or not because of this challenging time, if you are a frontline worker wishing to tell your person you love them, then please do send me a photo and message via DM of how you are celebrating and I will share your messages on my story over the next few days.” she said.

Jack and I are celebrating our 10th anniversary today…😍😍 and we are lucky enough to be together at this time. ⁣ ⁣ If anyone has an anniversary this week, if you are together or not because of this challenging time, if you are a frontline worker wishing to tell your person you love them, then please do send me a photo and message via DM of how you are celebrating and I will share your messages on my story over the next few days. #anniversary

Meanwhile, Camilla Parker Bowles has revealed the surprising way she has been keeping fit and healthy during the coronavirus lockdown.

Speaking via video chat to president of the Royal Academy of Dance, Dame Darcey Bussell, the Duchess of Cornwall said she had been practising ballet.

“I do a combination of a bit of Silver Swans and a bit of pilates and a lot of walking which I love,” said Parker Bowles.

Silver Swans is a ballet group aimed at women over 55.

“At first I thought it was going to be very funny and I was going to laugh at everybody toppling over next door to me. But we concentrate so hard that we don’t even know what our friend next door is doing. I think to myself drop your shoulders, breathe deeply, don’t hunch,” she said.

“We’ve all got to keep active. If we don’t we’ll seize up and won’t be able to get out of bed in the morning.”

But we are unlikely to see the 72-year-old don a tutu anytime soon.

“I’m very, very much a beginner and probably will always remain a beginner, but I do feel after a year, or 18 months, of doing it that maybe I’ve improved a tiny bit,” she said.

“But I’m certainly not going to be taking to the stage – I shall keep it in my own home very privately.”

Harry reminisces, Meghan advises and Camilla has tutu much fun