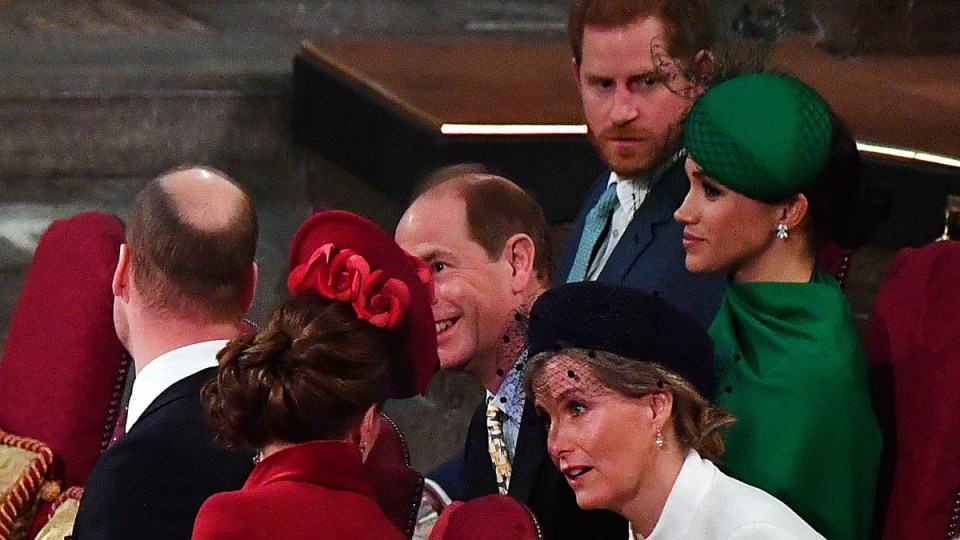 Brothers William and Harry together for the last time. Photo: AAP

There were smiles and waves – well, from Meghan Markle and Prince Harry, at least – as the royal family reunited at London’s Westminster Abbey for the last public event together before the official start of the historic “Megxit”.

The Commonwealth Service on Tuesday morning (Australian time) marked the first time the younger couple has been seen with the Queen, Prince Charles and the Duchess of Cornwall, Prince William and Kate Middleton since their January crisis talks when the family worked out a plan for Harry and Meghan to ‘step back’ from senior royal life.

The Duke and Duchess of Sussex were hand in hand and beaming from the moment they stepped out of their car before walking into the abbey to the sounds of a cheering crowd and bagpipes.

Meghan waved to William and Kate, who were in the row in front. The couple then chatted and laughed with Prince Edward, who was sitting next to them.

While photos and video released of the Cambridges from inside the service showed them looking noticeably stiff, they did share photographs of the proceedings on social media – including close-up shots of the Sussexes performing official duties.

The Duke and Duchess of Cambridge joined The Queen and Members of @TheRoyalFamily for the annual #CommonwealthDay Service at Westminster Abbey. The Commonwealth represents a global network of 54 countries working in collaboration towards shared economic, environmental, social and democratic goals — the Commonwealth theme for 2020 is Delivering A Common Future: Connecting, Innovating, Transforming. Her Majesty The Queen was 26 years old when she became Head of the Commonwealth in 1952 — important symbolic and unifying role. As Head, Her Majesty personally reinforces the links by which the Commonwealth joins people together from around the world. From working to protect the earth's natural resources and preserving the planet for generations to come, to championing fair trade and empowering the youth of today to transform the communities of tomorrow, this year’s Service celebrated the Commonwealth's continued commitment to delivering a peaceful, prosperous and more sustainable future for all. #CommonwealthDelivers

Taking to their Sussex Royal Instagram account shortly after the service, Harry and Meghan made no mention of the personal significance of the event, and did not upload photos of other members of the family, choosing instead to focus on the Commonwealth’s role in promoting peace and prosperity.

They said that as president and vice-president of the Queen’s Commonwealth Trust they had been “passionate advocates” of the Commonwealth and had spent “many years” working closely with “the next generation” of leaders.

This afternoon, The Duke and Duchess of Sussex attended the annual Commonwealth Service at Westminster Abbey on Commonwealth Day, alongside Her Majesty The Queen and Members of The Royal Family. The Commonwealth is a global network of 54 countries, working in collaboration towards shared economic, environmental, social and democratic goals, and the Service today seeks to highlight the vast community which spans every geographical region, religion and culture, embracing diversity amongst its population of 2.4 billion people, of which 60 percent are under 30 years old. As President and Vice-President of the @Queens_Commonwealth_Trust, The Duke and Duchess of Sussex have been passionate advocates of the Commonwealth having spent many years working closely with the next generation of Commonwealth leaders. The theme of the Commonwealth for 2020 is ‘Delivering A Common Future: Connecting, Innovating, Transforming', placing emphasis on youth, the environment, trade, governance, and ICT (Information and Communications Technology) and innovation. From working to protect the earth's natural resources and preserving the planet for generations to come, to championing fair trade and empowering the youth of today to transform the communities of tomorrow, the Service celebrates the Commonwealth's continued commitment to delivering a peaceful, prosperous and more sustainable future for all. Photo © PA

Royal biographer Penny Junor said she imagined everybody would be on their best behaviour.

“But goodness knows what they will all be thinking privately,” she said.

From the end of March, the Duke and Duchess of Sussex hope to carve out a “progressive new role” as they live a more quiet life while protecting baby son Archie from the eyes of the British media.

In a description of the new arrangements, published on the couple’s website, the royals said: “The Royal Family respect and understand the wish of The Duke and Duchess of Sussex to live a more independent life as a family, by removing the supposed ‘public interest’ justification for media intrusion into their lives. They remain a valued part of Her Majesty’s family”.

Harry, 35, and Meghan, 38, will stop using their HRH titles – His or Her Royal Highness – and will not use “royal” in their branding. Harry will remain a prince but will relinquish his military titles.

As the grandson of the Queen and second son of Prince Charles, Harry will remain the sixth in line to the throne and the order of precedence does not change.

Their announcement two months ago that they wished to step back from some of their royal duties sent shock waves through the monarchy.

It led to a crisis meeting involving the 93-year-old Queen, her heir Charles, William and Harry.

It was concluded Harry and Meghan would have to give up all their royal duties.

The couple have spent most of their time since in Canada, but returned at the start of the month for a farewell round of engagements.

Harry and Meghan’s baby son Archie has remained behind in Canada.

Monday’s event to mark Commonwealth Day is their last official royal appearance and comes less than two years since they married in a dazzling ceremony of pomp and pageantry watched by millions worldwide.

There is no certainty about when the family will next be seen together.

“Our hope was to continue serving the Queen, the Commonwealth and my military associations without public funding. Sadly that wasn’t possible,” Harry said in January.