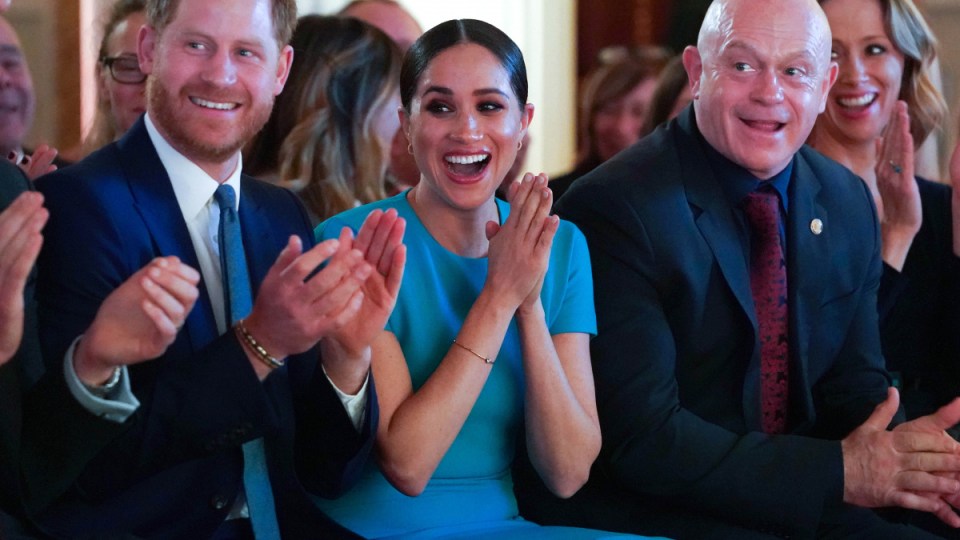 Prince Harry and Meghan cheer on a wedding proposal as they attend the annual Endeavour Fund Awards. Photo: Getty

The Duke and Duchess of Sussex had a mixed reception as they turned out for one of their last official engagements together before quitting as senior working royals.

Prince Harry and Meghan attended the Endeavour Fund awards in London on Thursday night (British time), to celebrate the sporting and adventure achievements of sick and injured service personnel.

It was their first official appearance together in Britain since their shock announcement in January.

Meghan flew in from Canada, where the couple have been living since November, to join Harry as they begin their final public engagements in Britain.

Meghan announced “it’s very nice to be back”.

The Endeavour Fund was established by the Royal Foundation to finance inspiring sporting and adventure projects to help veterans’ recovery.

The ceremony, at London’s Mansion House, is the first time the couple has been seen since they visited Canada House on January 7 to thank the nation for hosting them. A day after that, they dropped their bombshell announcement that they intended to quit as senior royals.

The couple arrived at the Endeavour Awards, sharing an umbrella, to cheers from a small crowd of well-wishers braving the inclement weather. There was one loud boo, but it was quickly followed by more loud cheers.

Harry and Meghan presented awards at the ceremony, and the duke made a short speech.

Harry will join Formula One world champion Lewis Hamilton at the official opening of the Silverstone Experience, a museum focused on British motor racing, on Friday.

The duke and duchess will then attend the Mountbatten Festival of Music at the Royal Albert Hall on March 7, and Meghan will mark International Women’s Day.

The couple will join the Queen and other royals at the Commonwealth Day service in Westminster Abbey on March 9 – their last official appearance as HRHs.

Harry and Meghan will then devote their undivided attention to forging a “new life” in which they seek “financial independence”.

Prince Harry and Meghan Markle arriving at the Endeavour Awards in London. It’s one of their final events together as official members of the Royal family 👀 pic.twitter.com/FgEzyJMZ3Q

Buckingham Palace declined to comment about whether the Queen – who was reportedly carrying out audiences at her London residence on Thursday – met the couple. There have been reports in the British media that Harry had a private lunch with his grandmother at Windsor Castle last weekend.

🎥 The Duchess of Sussex just presented of the #EndeavourFund award to Lee Spencer. pic.twitter.com/XJ9w9jabgi

The couple’s spokeswoman said: “In addition to the official engagements the duke and duchess are conducting over the course of the next few days, they are also meeting privately with several of their patronages.”

The couple formally step down as senior royals from March 31.

Melania Trump: Bombshell revelations about what she did during US Capitol riot
Retailer pauses facial recognition tech trial after privacy complaint
Donald Trump grabbed at steering wheel in bid to get to Capitol riot
Two charged over US migrant truck deaths
Governor-General admits ‘mistake’ over Insta ad endorsement
Nick Kyrgios spits at ‘disrespectful’ fan at Wimbledon
Harry, Meghan to reunite with William and Kate at final outing
Today's Stories