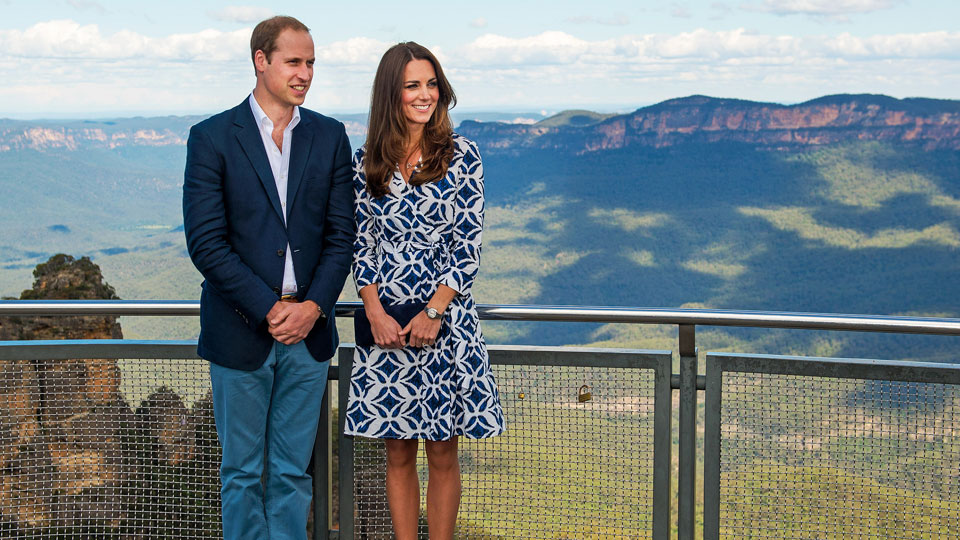 The Duke and Duchess of Cambridge in Katoomba, NSW, in April 2014. Photo: Getty

The news of the royal visit came amid reports of the latest royal drama, with claims the Queen’s oldest grandson Peter Phillips is separating from his wife Autumn Phillips after 12 years of marriage.

The Cambridges’ household at Kensington Palace has been negotiating with the Morrison government “for weeks”, according to Fairfax newspapers.

Prime Minister Scott Morrison is “expected this week to issue the formal invitation needed to clear the way for the tour.”

William will be making his fifth visit to Australia. He was last here with Kate and Prince George in 2014, when they had lunch with volunteers who fought bushfires in the Blue Mountains.

In 2010 William met families in Victoria’s Whittlesea who lost family and friends in the Black Saturday blazes.

It has not been confirmed if the couple’s three children will make the trip with their parents.

In early January, Kate and William posted their distress about the bushfires and were said to have immediately “expressed interest” in visiting affected areas but didn’t want to divert resources to a royal tour.

Our followers in Australia can find out the latest information on the fires by following the accounts on this list👇https://t.co/4fB5iGYSFr

As the devastating fires continue our thoughts remain with those impacted and those working heroically to fight them.

Also unconfirmed are the claims about Peter, who is 15th in line to the throne, but The Sun reported on February 10 he is “absolutely devastated” by Autumn’s decision to leave him.

Buckingham Palace declined to comment on the claim, which has not been confirmed or denied by anyone involved.

“He thought he was happily married and had the perfect family with two lovely daughters. But he is now in total shock.”

According to a friend, the couple has just “grown apart” but their news is a “bolt out of the blue” for a “very upset” Peter.

The Queen, 93, was “upset” to hear about the separation, according to The Sun, with the report coming hot on the heels of Prince Harry and Meghan Markle’s unprecedented ‘Megxit’ and Prince Andrew’s exile.

Canadian management consultant Autumn Kelly, 41, met Peter – who worked for the Williams Formula One racing team but now run his own sports management company – at an F1 race in Montreal.

In 2008, the couple were accused of being “grasping” and “vulgar” when they sold 60 pages of photos of their Windsor Castle wedding ceremony for $965,000 to Hello! magazine.

With daughters Savannah, 9, and Isla, 7, the Phillips’ have been regulars at family events including the Buckingham Palace balcony appearance at the Trooping the Colour parade.

“They’re just a family, they’re happy, they have great relationships with each other — they’re very close,” Autumn told CBC in 2016 of her in-laws.

Meanwhile, on February 8 –  two days after Harry, 35, and Meghan, 38, hung out their business shingle at a Florida investors’ summit – Prince Andrew also made an unheralded return to public life.

In his highest profile outing since the November announcement he was quitting royal duties “for the forseeable future” over his association with dead pedophile Jeffrey Epstein, the Duke of York visited Liu Xiaoming, China’s ambassador to the UK.

For the private visit, Andrew was flanked by his ex wife Sarah Ferguson, eldest daughter Princess Beatrice and her fiancé Edoardo Mapelli Mozzi,, who will wed at St James’ Palace in London on May 29.

The ambassador tweeted he had invited the Yorks over for Chinese New Year.

In a tweet posted shortly after the visit, Liu Xiaoming said Andrew delivered a message of sympathy to the Chinese people from Queen Elizabeth over the deadly coronavirus outbreak.

My wife and I invited Duke of York and his family to our residence and celebrated Chinese New Year. Their enthusiasm for China and contribution to China-UK relation is highly appreciated. pic.twitter.com/RXw6Zumsnp

An official comment has not been made by Buckingham Palace.