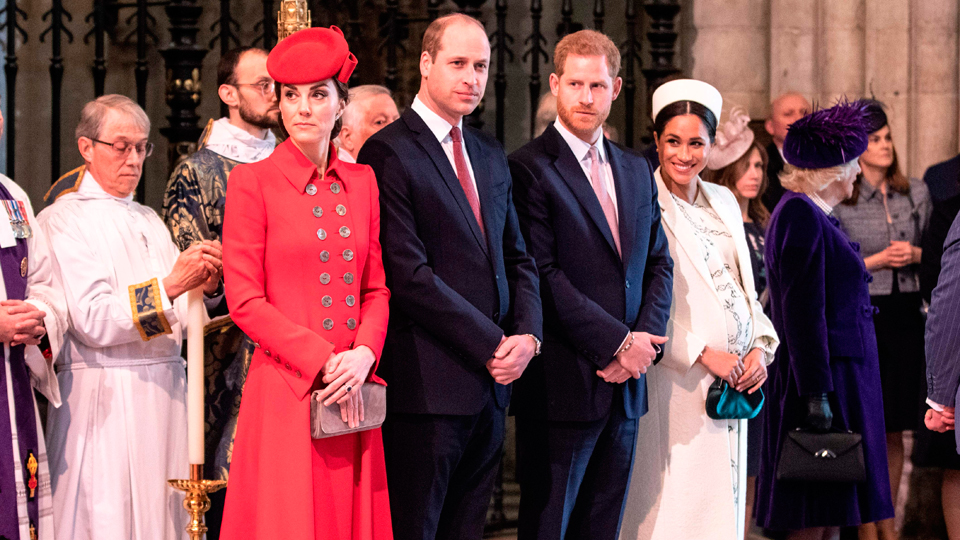 The Duke and Duchess of Cambridge with Prince Harry and Meghan Markle at 2019's Commonwealth Day service at Westminster Abbey. Photo: Getty

After their first big payday on the lucrative US speaking circuit, Meghan Markle and Prince Harry are said to be bringing nine-month-old son Archie back to the UK for a final royal outing.

The Sussexes, who bailed out as senior royals in January to start a new “financially independent” life in Canada, have been asked by the Queen to join the rest of the Windsors for a Commonwealth Day service at Westminster Abbey on March 9.

Being back in royal harness will be a change up for Harry and Meghan, who have been planning their assault on the corporate world in between taking walks and cooking family meals at their rented Vancouver Island mansion.

On February 6, on debut as business entrepreneurs, they earned a reported $1.5 million by taking to the stage at a JP Morgan investors’  summit in Miami, Florida.

Harry, 35, was introduced by Meghan, 38. He spoke to 450 celebrities and bankers about being in therapy for the last three years over the 1997 death of his mother Princess Diana, and said splitting from his family had been tough.

Now the duke will be reunited with the royal inner circle including the Queen, Prince Charles, Prince William, and the duchesses of Cambridge and Cornwall for the Commonwealth occasion.

Harry and Meghan will attend the service in their roles as president and vice-president of the Queen’s Commonwealth Trust, according to The Sunday Times.

When the couple first broke the surprise news they were decamping to North America, they said they planned to “honour our duty to the Queen, the Commonwealth, and our patronages”.

Other reports say the couple will wrap the one-hour afternoon event into a wider whistle stop ‘farewell’ tour. Meghan’s last trip back to the UK was so brief she left her son in Canada while she flew in and out for an appearance at Canada House on January 7.

Buckingham Palace would not comment on the claims that Harry, Meghan and Archie have been recalled home, albeit briefly.

Last year they laughed and chatted at the Commonwealth event with William and Kate. They were seated next to Prince Andrew, currently in exile from royal life over fallout from his friendship with dead paedophile Jeffrey Epstein.

While Harry and Meghan continue to attract negative comments on their Sussex Royal Instagram account (“Harry … you have become little more than a puppet”) the Queen is said by friends to be “unfazed” by the unprecedented living arrangements of his grandson and his wife.

The monarch is “remarkably relaxed”, according to The Sunday Times, and has said Harry’s birthright must not stand in his way.

If that’s what they want, if they want to go, we must let them go,” she is said to have told friends.

Negotiations over Megan and Harry’s ‘Megxit’ are still ongoing. The couple’s financial and security details are still being hammered out, with their use of the Sussex Royal brand for commercial deals still not resolved.

Meghan and Harry’s reported plan to spend time this northern summer in her home town of Los Angeles prompted speculation they might be special guests at the Oscars on Monday (AEST.)

There has also been speculation the former Suits star might return to acting.