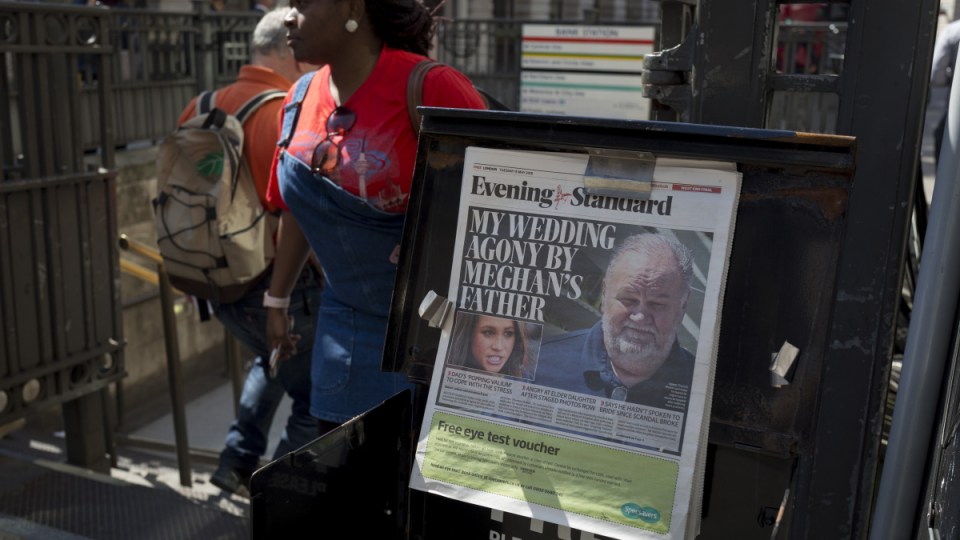 Evening Standard headlines in May 2018 with news of Meghan Markle's father not attending the royal wedding. Photo: Getty

The Duchess of Sussex’s father says he is willing to testify against his daughter as part of Meghan’s legal action against three newspapers.

Thomas Markle is the main witness for Associated Newspapers, owner of Britain’s Mail on Sunday and MailOnline, in its response to Meghan’s legal action over an article featuring parts of a handwritten letter to her father.

The duchess’s defence is seeking damages from the publisher for alleged misuse of private information, copyright infringement and breach of the Data Protection Act.

In court documents, the publisher argues an article in US People was sanctioned by the duchess and its effect “was to suggest that Mr Markle has made false claims about his dealings with his daughter and that he was entirely at fault in not attending the royal wedding and for the estrangement between himself and the claimant”.

“I’ll see Meghan in court,” Markle said to The Sun.

“I wish it hadn’t come to this, but I will certainly testify against the things that have been said about me.

“When me and Meghan end up in a courtroom together, it will be quite stunning for everybody.”

Legal documents submitted to the High Court shed light on the relationship between Meghan and her father, with Markle claiming he contributed tens of thousands to her education, paying private school fees, university tuition costs and her student loan even after her career as an actor took off.

Markle claimed the duchess sent him only occasional “modest” financial gifts after landing a role in the hit TV series Suits, even though he was still paying off her college debts.

An extract from a responding letter from Meghan, published by the Mail on Sunday and on MailOnline in February last year, read: “Your actions have broken my heart into a million pieces – not simply because you have manufactured such unnecessary and unwarranted pain, but by making the choice to not tell the truth as you are puppeteered in this. Something I will never understand.”

Her lawyers claim that, had the letter been published in full, it would have “undermined the defendant’s intended negative characterisation” of her.

They also say the “true sentiment” of the letter was Meghan’s concern about her father’s welfare and his exploitation by tabloid newspapers, which he should stop talking to.

The publisher’s lawyers have accused the duchess of being more worried about the “unflattering” effect of the publication of letter extracts written to her estranged father than any breach of her data protection rights.

The relationship between Meghan and her father broke down completely in the week of her wedding in May 2018, a few months before the letter – thought to be the last communication between the pair – was sent.

Harry and Meghan are dropping their HRH styles and stepping down from royal duties in search of freedom away from the monarchy, and will raise Archie Mountbatten-Windsor mostly in Canada.