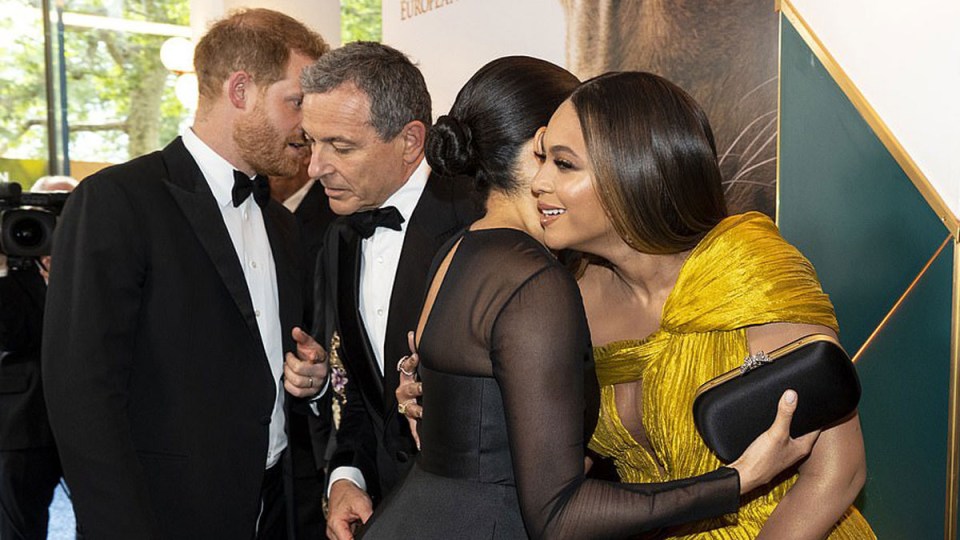 Meghan has since signed a voiceover deal with Disney. Photo: Getty

Video footage has emerged of the Prince Harry promoting his wife’s availability to do voiceover work to the head of global entertainment giant Disney.

The Duke of Sussex was filmed chatting to Robert Iger, chairman and chief executive of the Walt Disney Company, during the European premiere of Disney’s Lion King, and of Meghan: “You do know she does voiceovers?”

Iger replied: “I did not know that,” and the Duke went on to say: “You seem surprised. She’s really interested.”

The exchange took place in July when the Duke and Duchess also met celebrity couple Beyonce and Jay-Z at the event in London’s Leicester Square.

Meghan has agreed a voiceover deal with Disney, which will make a donation to wildlife charity Elephants Without Borders, which is supported by Harry, the UK’s Times newspaper reported on the weekend.

A source has confirmed the agreement, saying it was a model similar to the Lion King premiere, where Disney “kindly” donated to the Royal Foundation.

The source added: “A formal announcement will follow in due course, but Disney has made a donation to Elephants Without Borders for this voiceover project.”

The Duke and Duchess have announced they want to step back as senior royals, split their time between the UK and North America, and become financially independent.

The deal may hint at how the couple may operate if they get their wish to take on commercial ventures.

On Tuesday morning, Queen Elizabeth II ended days of speculation, by confirming Harry and Meghan will live between the UK and Canada as they raise their son Archie – without the public purse.

The monarch finally addressed the Sussexes’ shock plan to separate from the royal family after holding crisis talks at her Sandringham estate.

The Queen, along with other senior royals, hoped to thrash out a solution for her grandson Harry and wife Meghan’s royal lives in a way that balanced their duties with their desire for “financial independence”.

In the end, all she could do was “respect and understand their wish to live a more independent life”, a statement by the 93-year-old monarch read.