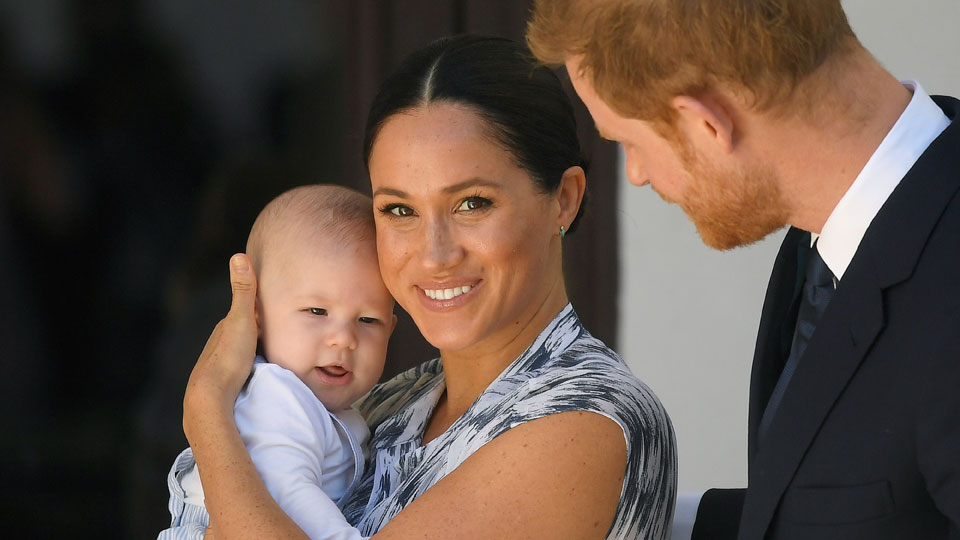 The Duke and Duchess of Sussex with Archie in South Africa on September 25, the last time he was photographed. Photo: AAP

Nearly six weeks after they were last seen in public, Meghan Markle and Prince Harry’s just-released 2019 Christmas card has given a glimpse of their life with son Archie, seven months.

In an on-brand black and white image, the Duke and Duchess of Sussex are seen beside a twinkling Christmas tree. A curious Archie has crawled away from his parents and is staring down the barrel of the camera.

The image is casual, with Harry in shirt sleeves and Meghan a roll neck jumper and her hair undone. Their little boy is wearing a hand-knit with button details.

The card was tweeted by the Queen’s Commonwealth Trust on Christmas Eve rather than being shared by the couple on their Sussex Royal Instagram account.

“Wishing you a very Merry Christmas and a Happy New Year. From our family to yours,” read Meghan and Harry’s 2019 festive greeting, printed in swirling metallic font.

“Just sharing the sweetest Christmas Card from our President and Vice-President, The Duke and Duchess of Sussex. Very Merry Christmas, everyone!” read the tweet.

Just sharing the sweetest Christmas Card from our President and Vice-President, The Duke and Duchess of Sussex. Very Merry Christmas, everyone! pic.twitter.com/McOcHALoGl

The photo drew rave reviews from royals fans, with most declaring ‘King Archie’ had stolen the show. 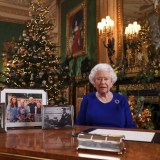 Queen to acknowledge ‘bumpy path’ of 2019

“He does not need a title. He is a real prince (charming),” said one. “It’s like he wants to pucker up and kiss someone,” tweeted a second. Noted a third, “he even inherited his dad’s lip bite.”

But the love for the Sussexes online was tempered by a claim from UK newspaper The Sun, which quoted a royals source as saying the Windsors are disappointed Harry, Meghan and Archie didn’t come home from overseas when Prince Philip was hospitalised on December 21.

“Even before the Duke became ill, many were at a loss as to why Harry and Meghan would miss what could be one of the last family Christmases with the Queen and Philip,” a family member reportedly told a friend.

“There is a feeling they are being inconsiderate and selfish, given the Queen and Philip’s advancing age. They really should have thought about returning.”

Buckingham Palace confirmed on December 20 that the Sussexes are “spending private family time” at an undisclosed location in Canada as part of their six weeks away from royal duties.

Meghan lived in Canada for seven years when she filmed Suits, and “the decision to base themselves” there over the festive season shows its “importance” to her and Harry, a palace statement said.

“For security reasons we will not be releasing any further details and request that their privacy is respected.”

Meghan and Harry were among the last senior royals whose annual Christmas cards have been released.

Kate Middleton and Prince William’s family card was leaked early by a Royal Air Force member who was sent it by patron Kate.

Like the Sussexes, their children Prince George, 6, Princess Charlotte, 4, and Prince Louis, 1, pull focus in the candid image, which shows them posing on what looks to be a vintage motorbike with sidecar.

Prince Charles and the Duchess of Cornwall also went for an automotive themed card, sending friends and family a shot of them in Cuba earlier this year.

Here is this year’s official Christmas card from The Prince of Wales and The Duchess of Cornwall. 🎄 The photo was taken in Havana by Ramon Espinosa during the Royal visit to Cuba earlier this year.

Charles told a reporter on December 23 his father is “being looked after very well” at King Edward VII’s Hospital in London, where he was admitted with a pre-existing condition.

“But at the moment that’s all we know.”

During a visit to flood-hit communities in South Yorkshire, Charles told a woman the duke is “alright. When you get to that age things don’t work so well.”

Meghan and Harry’s Christmas card has Archie as its star