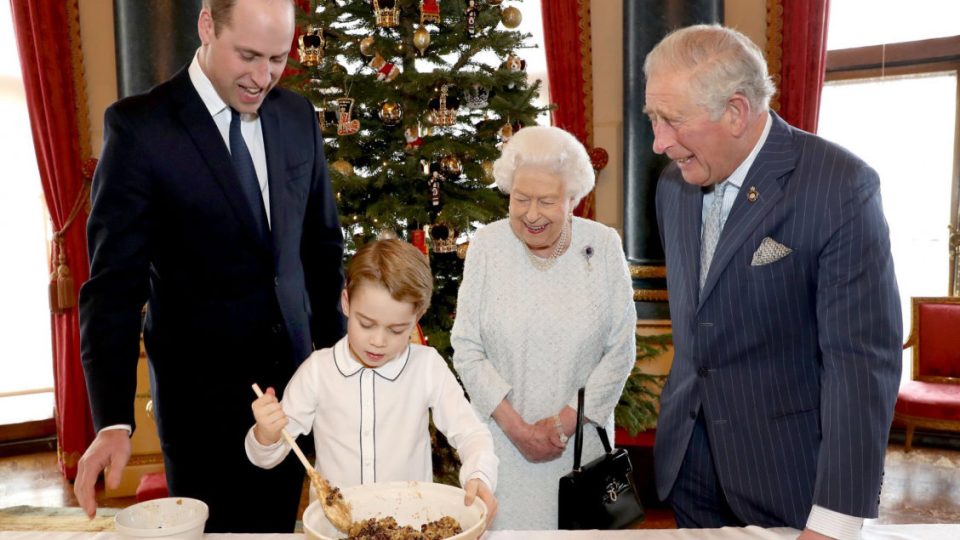 Prince George in 2019 mixes up the Christmas pudding, watched on by his proud dad, grandfather and great-grandmother Queen Elizabeth. Photo: Buckingham Palace

As her 98-year-old husband remains in hospital, Queen Elizabeth looks determined to get on with her Christmas plans as usual – or as close to normal as it could be amid feuds and the fallout from the Prince Andrew scandal.

Dressed in festive green, Her Majesty attended a service at St Mary Magdalene Church in Norfolk on Sunday (UK time). With Prince Philip in hospital for a second night, the Queen was instead accompanied by other relatives for the journey from her nearby country estate.

It comes after Buckingham Palace released photographs of four generations of royalty gathered together for a spot of Christmas cooking, in what appeared to be an attempt to show the family is prepared to lead well into the future.

Looking on, and laughing, is his father Prince William, grandfather Prince Charles and great-grandmother Queen Elizabeth.

The four were dressed formally, and did not wear aprons.

The Queen even clutched on to her handbag for the shots, even as they whipped up the puddings.

Amid health scares, feuds and scandals, it has been a difficult year for the monarch trying to maintain the family’s reputation.

So the picture opportunity of Elizabeth II and the three males next in line to the throne could have more significance than just being a symbol of family fun.

The get-together occurred just days before another shock for the royals when Prince Philip was taken to hospital over a health scare, but photographs were not released until Sunday morning (Australian time).

The palace said on Sunday the Duke of Edinburgh would remain in hospital for a “few” more days, as doctors monitor what is said to be a pre-existing medical condition.

It’s understood his condition is not so dire that the Queen has to change her Christmas plans.

On Friday she headed by train to Norfolk, where she traditionally spends her break at Sandringham Estate.

A statement from Buckingham Palace on Friday said the duke’s hospital admission was a “precautionary measure”.

“The Duke of Edinburgh travelled from Norfolk this morning to King Edward VII’s Hospital in London for observation and treatment in relation to a pre-existing condition,” it read.

“The admission is a precautionary measure, on the advice of His Royal Highness’s doctor. The duke was not taken by ambulance and is expected to be in hospital for a few days.”

It looks like he will also miss this year’s outing.

There will also be another three empty places at the 24-seat dining table on Wednesday: Prince Harry and wife Meghan have instead taken their baby son Archie to Canada.

It will be the couple’s first Christmas as parents, and palace officials said on Friday they wanted to get away for some “private” family time.

Prince Harry, Meghan, and Archie, we’re all wishing you a quiet and blessed stay in Canada. You’re among friends, and always welcome here.

The prince’s office did not provide details of how Meghan and Harry will spend their day, but it’s believed they are holidaying with Meghan’s mother.

Before she married Harry, Meghan lived in Toronto for many years while she was filming the TV series Suits.

“The decision to base themselves in Canada reflects the importance of this Commonwealth country to them both,” a spokeswoman told the Daily Mail UK.

“The Duke of Sussex has been a frequent visitor to Canada over many years, and it was also home to The Duchess for seven years before she became a member of the Royal Family.

“They are enjoying sharing the warmth of the Canadian people and the beauty of the landscape with their young son.”

In a November statement, a spokesman confirmed the young family would be taking six weeks’ leave.

“The Duke and Duchess of Sussex are looking forward to extended family time towards the end of this month. Having spent the last two Christmases at Sandringham, their royal highnesses will spend the holiday this year, as a new family, with the duchess’s mother Doria,” it read.

“This decision is in line with precedent set previously by other members of the Royal Family and has the support of Her Majesty The Queen.”

The decision to break from the family tradition comes as the family was presenting itself in a picture of unity in its latest release.

And in what is perhaps also a nod to a willingness to change tradition, the family announced it had decided to add poppy seeds to the pudding batter.

The palace said the recipe alteration was meant to be a symbol of remembrance and tribute to the armed forces.

The Queen has supported the British Royal Legion since 1952.

A new Royal British Legion recipe was created for the launch, with The Royal Family uniquely adding poppy seeds to the mixture, in a nod to the charity’s iconic symbol of Remembrance. pic.twitter.com/BGlHbD5p3R