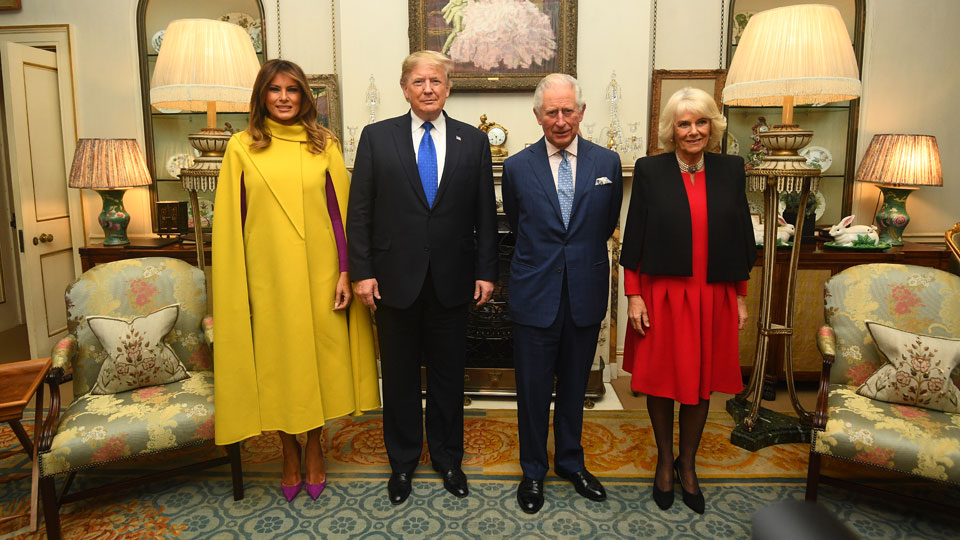 Melania and Donald Trump with Prince Charles and the Duchess of Cornwall in London on December 3 before the NATO reception. Photo: Getty

A day after more allegations about his links with Jeffrey Epstein were aired on the BBC, Prince Andrew was a notable absentee from the first royal gathering since the sex scandal that has seen him exiled.

All the Queen’s other children were on hand at Buckingham Palace for a reception for NATO leaders on Wednesday morning (Australian time.)

Andrew stood down from public life after he was criticized for showing no remorse for his friendship with Epstein and little sympathy for his alleged victims during a disastrous Newsnight interview.

But the duke was still a topic of conversation as politicians including Donald Trump were welcomed to the palace by the monarch.

Hours before, Mr Trump relegated Andrew to the ‘It Wasn’t Me’ basket when asked about the controversy.

The two men were snapped together in 2000 at Mr Trump’s Florida estate Mar-a-Lago with the President’s then-girlfriend Melania Knavs.

They also had a breakfast meeting in June during Mr Trump’s state visit to London, and the prince gave Donald, Melania and Ivanka Trump a personal tour of Westminster Abbey.

The main new revelation of the BBC’s Panorama investigation into Andrew and Epstein was an alleged email from him asking for details about accuser Virginia Roberts Giuffre from accused ‘madam’ Ghislaine Maxwell.

There were also allegations from five new female witnesses that Andrew watched them give massages to Epstein.

Ms Giuffre reiterated the claims she made on 60 Minutes in November about dancing with the sweaty prince at London club Tramp before she was trafficked to him in a “horrible” encounter.

The expose placed a harsh spotlight on the royals as they hosted the event for NATO’s 70th anniversary, but Mr Trump took the heat off the Windsors with a sharp exchange with French President Emmanuel Macron.

The US President denounced as “very insulting” a a claim by Mr Macron that NATO is suffering “brain death”.

Mr Trump then clashed with the French president about accepting captured ISIS fighters.

The contentious exchange reflected an apparent rift between the French and US presidents over how to deal with the nearly 10,000 prisoners held in Syria.

Things were smoothed over when the two men met at the US ambassador’s London residence and Mr Trump acknowledged the need for greater “flexibility” in NATO’s responses to global threats.

Mr Macron stood by his original remarks, while recognising US concerns that other allies had not shouldered a fair share of the financial burden for collective defence.

Mr Trump said they had had a “very good discussion”.

As the palace reception took place, protesters including doctors and nurses marched from Trafalgar Square down The Mall, campaigning over potential risks to Britain’s National Health Service from a future US-UK trade deal.

Stand Up To Trump, Stop the War Coalition and the Campaign for Nuclear Disarmament were among other groups which took part.

Inside the palace, the royal family was out in force, with Prince Charles, the duchesses of Cornwall and Cambridge, Prince Edward, the Duke and Duchess of Gloucester and Princess Alexandra on hand.

Prince Harry and Meghan Markle were also not on the guest list because the reception fell during their six weeks’ holiday from public duties before their first Christmas as parents.