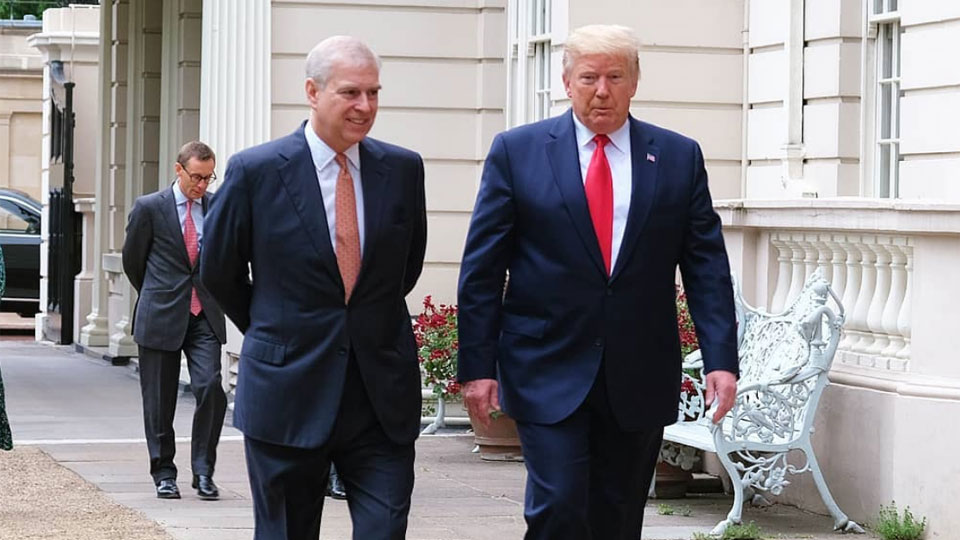 Forced by the Queen to retreat from public life, Prince Andrew is reportedly preparing to give formal evidence to a US criminal investigation into the activities of late pedophile Jeffrey Epstein.

Buckingham Palace is understood to be bracing for the Duke of York to be issued with a subpoena by US authorities, according to The Telegraph.

It would require Andrew to give testimony under oath about his friendship with Epstein.

The summons is “imminent”, according to sources.

It comes as US lawyers for Epstein’s victims urged the duke to co-operate with investigators, insisting he ” was simply not credible” in the widely criticised BBC interview.

American lawyer Lisa Bloom tweeted she has been working with five victims.

“He and his staff must co-operate with all investigations, show up for civil depositions and trials, and produce all documents,” Ms Bloom said.

“We are just getting started,” she added.

I've been working with my 5 Epstein victim clients for months. Prince Andrew was simply not credible in his interview. He and his staff must cooperate with all investigations, show up for civil depositions and trials, and produce all documents. We are just getting started. https://t.co/7IFImNRfj5

And in a further blow, the duke’s name has also appeared in a trove of sealed documents detailing new Epstein allegations, The Telegraph reports.

A US judge will reportedly decide within weeks whether to unseal more than 3000 pages of evidence that formed part of a defamation lawsuit in 2015.

Epstein, who killed himself in a New York jail in August, was close enough to Andrew to be invited to his daughter Princess Beatrice’s 18th birthday party after he was charged with child sex offences.

Still reeling from the dreadful backfire of his BBC Newsnight interview, the prince took the unprecedented step of cancelling all royal engagements for the “foreseeable future”.

He announced the decision in a November 20 statement released on palace social media accounts that said he “deeply sympathised” with Epstein’s alleged victims.

“Of course, I am willing to help any appropriate law enforcement agency with their investigation, if required,” Andrew said. 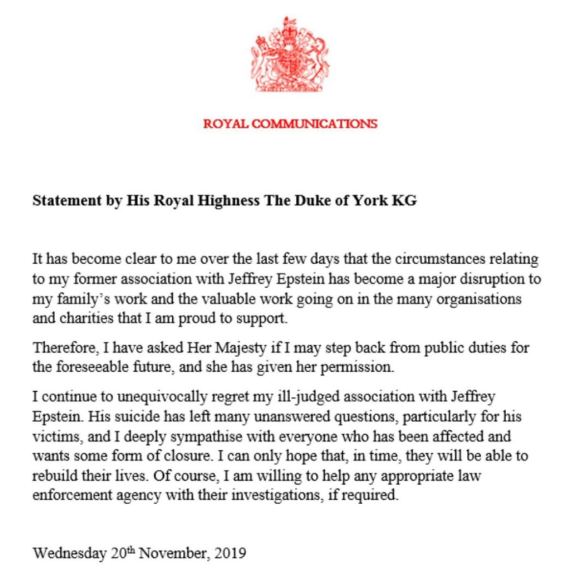 The palace declined to comment on the subpoena claims.

Immediately after effectively sacking her third child on her 72nd wedding anniversary, the Queen headed out for an engagement.

Chatting with Sir David Attenborough at an awards ceremony, she showed no signs of the crisis engulfing her family.

Despite Epstein’s death – over which two prison guards are facing charges of falsifying records – the FBI is reportedly still interviewing alleged Epstein victims as part of a probe into potential co-conspirators.

Andrew, 59, has denied knowledge of Epstein’s activities and has repeatedly refuted allegations by Australian woman Virginia Roberts Giuffre she was forced to have sex with him three times in 2001.

“The victims deserve justice and they will get it,” US Attorney-General William Barr told a law enforcement conference in New Orleans shortly after Epstein’s suicide.

“Let me assure you that this case will continue on against anyone who was complicit.”

Andrew’s royal status will not protect him from a subpoena, according to Anna Rothwell, a lawyer at British law firm Corker, Binning.

He is “not entitled to any form of immunity by virtue of his position as a member of the Royal family,” and he would be “vulnerable to extradition”, Ms Rothwell told The Times.

Lawyer Gloria Allred, who represents one of Epstein’s accusers, told ITV’s Good Morning Britain that now Andrew has been “in the court of public opinion, he should testify to the FBI”.

“It’s more likely the authorities are going to want to speak to him now. And they should want to,” she told a BBC news show.

The removal of Andrew from public life is “without precedent in modern times,” said BBC royal correspondent Jonny Dymond.

“It’s hard to see what will bring him back. Right now the humiliation is complete. And the monarchy is shaken.”

Meanwhile, The Times claimed a letter it was sent in March 2011 by Andrew’s private secretary casts doubt on the duke’s claims to Newsnight he first met Epstein in 1999.

Alastair Watson wrote to the newspaper to deny reports the duke was a friend of Saif Gaddafi, son of late Libyan dictator Muammar Gaddafi.

He also commented on Andrew and Epstein, saying, “The Duke has known Mr Epstein since being introduced to him in the early 1990s.”