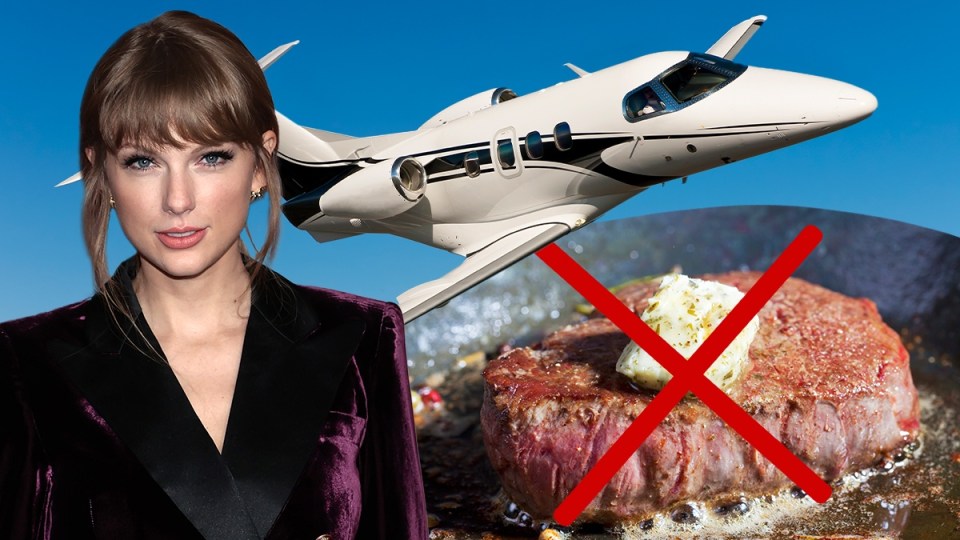 A Taylor Swift fan detailed the bizarre plan in a Reddit post which has since gone viral online. Photo: TND

A dedicated Taylor Swift fan has proposed her fellow ‘Swifties’ give up beef in order to offset the singer’s staggering private jet carbon emissions.

And no, we’re not talking about Swift’s highly publicised beef with the likes of Kanye West or Justin Bieber’s manager Scooter Braun.

Swift came under fire last week when it was revealed that she was biggest celebrity carbon polluter of 2022 so far, thanks to 170 trips taken on her private jet.

A report produced by data analyst Yard said Swift’s jet spent a total of 15.9 days in the air so far this year – producing 8293 tonnes of CO2 in 2022 – 1184 times more than the average person’s annual emissions.

The travel data was retrieved from Twitter page @CelebJets, a coded and automated page that has extensively covered the trips taken by various celebrities’ private planes.

Following the release of the shocking statistics, a Reddit user by the name of JKUAN108 proposed that 70,000 Swifties alter their diets to make room for the singer’s CO2 emissions.

‘‘If Taylor could convince 70,000 of her American fans to cut their beef consumption in half, it would completely offset the carbon footprint of her private jet,’’ the now-deleted post read.

According to a 2019 study, beef produces just under 50 kilograms of greenhouse gas emissions per every 100 grams of protein.

As for the criticism over her private-plane emissions, Swift is struggling to ‘shake it off’.

The singer’s representative vehemently denied the suggestion that she was solely responsible for the jet’s emissions.

In a statement to Yard, they claimed that the jet is regularly loaned out to others.

“Taylor’s jet is loaned out regularly to other individuals. To attribute most or all of these trips to her is blatantly incorrect.”

Your jet or mine?

The conversation around private jet usage took off three weeks ago when Kylie Cosmetics mogul Kylie Jenner posted a picture to her Instagram.

Posing with rapper boyfriend Travis Scott between their two private planes, the youngest Kar-Jenner sister posed a question in the caption: ‘‘You wanna take mine or yours?’’

Jenner’s followers blasted her for the egregious display of wealth, branding her a ‘‘climate criminal’’.

‘‘This is environmental negligence,’’ one follower wrote in the comments.

Had Jenner driven, the trip would have taken about 40 minutes.

Jenner, 24, is known for regularly flaunting her fortune, with her net wealth once estimated at $US1 billion.

She often posts images of ‘Kylie Air’ branded cups, napkins and amenities aboard her private jet.

Despite the furore directed her way, Jenner surprisingly landed outside the top 10 CO2 offenders listed by Yard.

The A-lister apparently ranked 19th. However, her elder sister Kim Kardashian earned herself a top-10 ranking.

Kardashian has boarded her private jet 57 times so far this year, emitting 4268 tonnes of CO2.

Sitting behind Swift in the No.2 spot was boxing legend Floyd Mayweather.

He has boarded his Mayweather-branded jet 177 times so far this year, more than any other celebrity.