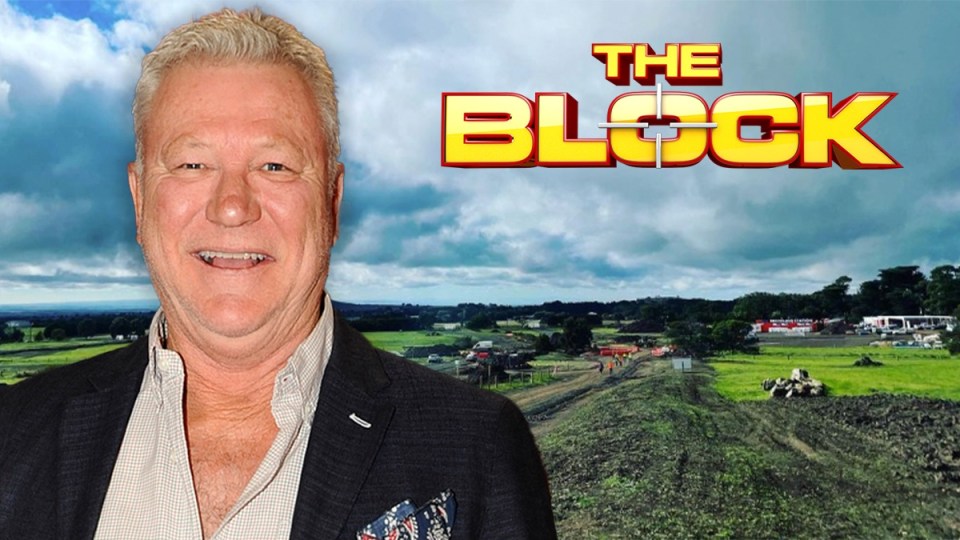 In 2003, it was a 73-square-metre space in Bondi. This year, it's 500 square metres with pools and chook sheds in regional Victoria. Photo: TND

Late last year, Nine’s building renovation juggernaut The Block was on track for another massive cash windfall for its contestants.

At the time, with the Reserve Bank suggesting interest rate hikes were unlikely to rise before 2024, the show embarked on its most ambitious project ever, with the decision to go rural for the first time in the show’s 18-year history.

Instead of renovating shabby and outdated suburban beachside apartment blocks or land developments, producers decided to go one step further.

They bought an 28-hectare block of land for more than $10 million in regional Victoria.There are five four-hectare blocks, plus a sixth block for host Scott Cam to renovate a house, across 60 hectares.

The plan was for old, rundown houses sourced from Queensland and Victoria to be delivered to each block.

The 500-square-metre interiors would be seven-star energy rated, be completely off grid, and be decked out with extravagant playgrounds of pools, tennis courts and a winery.

Then, in April, the Gisborne South development hit some stumbling blocks.

Speaking to The New Daily less than two weeks before the show airs,  executive producer Julian Cress said labour and materials shortages in the construction industry put the show under serious pressure.

“A delay wasn’t something we could do, so it meant we came under more pressure. We couldn’t move our deadline,” he said.

“We were having to build these gargantuan houses in a rural environment in the middle of a crisis in the construction industry.

“Everything that could challenge us came to be.

“But we love a challenge. Everybody knuckled down and did what they needed to do.”

And the question now is, will higher costs for materials and labour, on top of rising interest rates, deter high-end buyers from having a crack at what the show is calling “new rural“?

Crisis meetings and a call for help

After being selected from thousands of applications earlier this year, one of the couples had to be replaced in April after they decided to down tools three days into filming.

The weather in Gisborne South deteriorated into a wet winter, not a great friend when using heavy earth-moving machinery, loaders and diggers.

Mr Cress and a publicist for the show, Luke Dennehy, went public with pleas for help last month amid a season in crisis.

“We’ve battled through a lot over the last two years making the show with the pandemic, and I think we’re just seeing a bit of a hangover with COVID now,” he told 3AW in early June.

“Materials have been incredibly hard to come by. A lot of the things we take for granted are just unobtainable … but now we’ve run into a real shortage of labour as well.

“Now, when the clock starts to run down and you’ve only got weeks to go … that’s when it’s crunch time.”

Mr Dennehy posted on Twitter on June 8: “Can confirm, yes it’s been a tough build on @TheBlock because of so many challenges that the whole construction industry can identify with in Australia.

“However, we are also making a great show. Lots of drama in front of the camera, that’s for sure!”

Six weeks ago, the building construction company contracted to the show, Nine in Six, put out a request for tradesmen and was inundated with applications.

“We now have the resources to call on and will be doing our best to get back to everyone over the next 48 hours,” it wrote.

Fast forward to the end of July, Mr Cress now says they wouldn’t have been able to get through it without the support of key sponsors James Hardie and companies like Freedom Kitchens, whose owners resorted to working night shifts to get five kitchens built in less than a month.

Phil Dwyer, a builder who has worked in the industry for five decades and says he’ll be watching The Block, tells The New Daily it would have been a “challenge” given the difficulty finding qualified trades.

“Skill sets are really left wanting in the building industry at the moment … to get trades at all is difficult because we do have an extreme shortage.”

He said the fact that The Block is a notable construction entity meant they could source materials much more easily than a little builder could.

“As builders, we look on with awe at the way they can get permits and subdivide so quickly,’’ Mr Dwyer said.

‘‘It takes other people years to do what they’re doing. They do it in no time flat. How on earth they get through it all, it’s fascinating.

“I’ll watch it, of course … in some ways you’ve got to commend them in the way they go about it.

“Their marketing is second to none. The passion that appears to exist for these people who want to buy these properties and they just go for it.”

Despite widespread supply and trade shortfalls, a Housing Industry Association statement released last week said there was a record number of homes under construction, 54 per cent higher than pre-pandemic levels.

“This represents the gradual but continued progress being made in the HomeBuilder pipeline and this should help gradually reduce the pressure on supply of materials and labour,” HIA Victorian executive director Fiona Nield said.

“With interest rates and the cost of building increasing rapidly, affordability constraints will increasingly push home buyers back towards more affordable, higher-density living.

“The combination of all these demand and supply factors will keep Victorian builders busy in 2023.”

So what does this all mean for potential Block buyers?

It is unclear what effect rising interest rates will have on demand for these homes come auction day in three months’ time.

“Will that curtail the spending habits of people who were looking for lifestyle properties and a tree change? Probably.

“There will be fewer people with the funds and ability to pursue a tree change as much as everybody wants to. The size of the market will shrink.

“On the other hand, for those in the market, they won’t find better ones. They are 40 minutes from the CBD, on 10 acres, brand-new homes with enormous amenity.

“I don’t think there’s much on the market that will rival what we’re offering at the price we will be seeking.”

So what did each one cost to build? In excess of $4 million all up.

“The materials cost of renovating or building a home has become so extreme that for people interested in lifestyle properties, there will be fewer buying them, but fewer people building them,” Mr Cress said.

“So, that means they’re better off buying properties that are fully built, renovated and fully furnished. There aren’t going to be many of those.”

Director and auctioneer at Raine & Horne real estate in Gisborne, Ken Grech, who has 42 years’ experience in the industry, has one gem similar to a Block house on his books.

He is currently selling an historic six-hectare, four-bedroom architect-designed homestead called Couangalt, around the corner from The Block‘s development, with separate barn, dam, tennis court, swimming pool and wine cellar for between $2,950,000 to $3,245,000.

Using that property as an example, Mr Cress said they were looking at $4 million-plus for each four-hectare property.

“If people are paying $4 million for the houses we built, they’d be getting them under cost price,” he said.

Mr Dwyer said there was “a certain number of people who want to buy these Block properties. They fall over themselves to buy them and pay enormous amounts of money for them”.

Either way, Mr Cress said that while interest rates have gone up, and that is a challenge, there were still bargains to be had by people who can afford them.

“I just have to cross my fingers and hope there are five of them.”