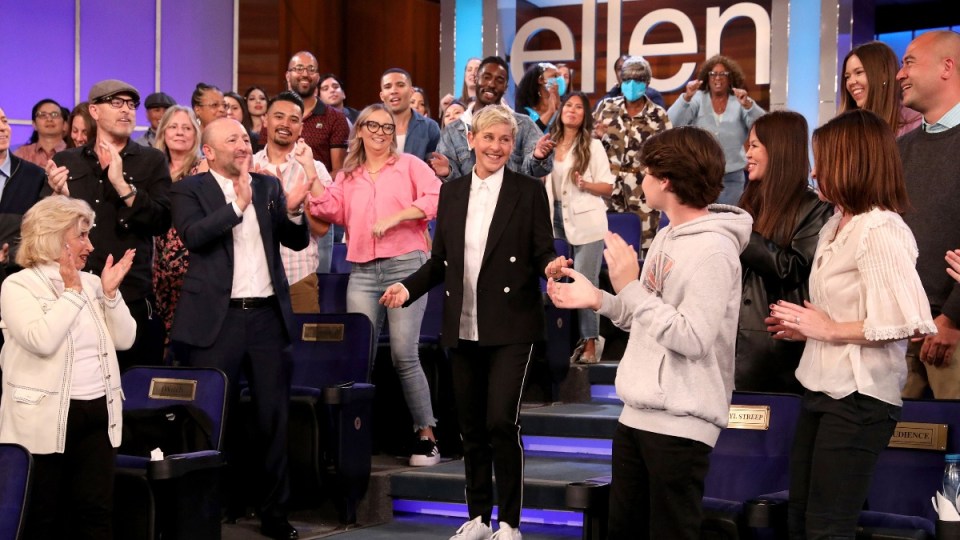 Among the celebrity guests was Jennifer Aniston, who was actually the show's first guest in 2003. Photo: AP

The final episode of Ellen DeGeneres’ daytime talk show has aired after almost 20 years on our televisions.

The farewell episode of Ellen aired on Thursday, 26 May, with a final lineup of celebrity guests, interviews and musical performances.

Among the celebrity guests was Jennifer Aniston, which was only fitting as the Friends star was the first guest on the premiere of Ellen back in 2003.

It was an emotional final episode for fans of the show, many having remained loyal to DeGeneres, despite allegations of a toxic workplace casting a shadow over the series finale.

The beginning of the end

DeGeneres announced in May 2021 that her show would end after more than 3000 episodes.

During the premiere episode of Season 18, DeGeneres addressed the allegations and subsequent investigation. She took responsibility for what happened at her show and apologised to those affected.

She confirmed she had made the necessary changes, presumably referencing the firing of three senior producers, and declared Season 18 a new chapter.

But for DeGeneres, who had made a name for herself as the ‘be kind’ lady, the damage was done.

Explaining her decision to end her show after 19 seasons, DeGeneres said it was a matter of trusting her instincts.

“My instinct told me it’s time,” she said, but did not mention the allegations.

In her final monologue, DeGeneres spoke about how far her series has come.

When she first started the show 19 years ago, DeGeneres said she wasn’t allowed to say the word ‘gay’.

“I was not allowed to say ‘gay’. I said it at home a lot. You know, ‘What are we having for our gay breakfast?’ Or, ‘Pass the gay salt’. ‘Has anyone seen the gay remote’ – things like that,” she joked, before taking on a more sober tone.

“I couldn’t say ‘we’ because that implied that I was with someone. Sure couldn’t say ‘wife’ and that’s because it wasn’t legal for gay people to get married. And now I say wife all the time.”

Twenty-five years ago, the host continued, her self-titled sitcom was cancelled “because they didn’t want a lesbian to be in prime time once a week”.

Reflecting on her show, an emotional DeGeneres described it as “the greatest experience I have ever had, beyond my wildest imagination”.

And like the hundreds of times before, Ellen danced her way towards the audience.

For inspiration, DeGeneres asked Aniston – who has appeared on Ellen a whopping 20 times – about how she dealt with the end of Friends.

“Well,” Aniston answered, laughing. “I got a divorce and went into therapy. Oh, and then I did a movie called The Break-up, I just kind of leaned into the end.”

Aniston, however, didn’t recommend divorce for DeGeneres and de Rossi. Instead, she asked the host about what was next.

DeGeneres answered that she’s keen to “lay low for a little while” and rest.

“And then I’ll do something for a while, but I don’t know what it is yet.”

Speaking to The Hollywood Reporter during the final week of filming, DeGeneres said it all depends on timing. Although contractually, she will deliver another Netflix standup special – she returned to standup after 15 years with 2018’s Relatable – DeGeneres said there are other opportunities in film and touring.

“People are offering me private gigs or Vegas gigs, so I don’t know if it’s standup, if it’s acting, for sure there’s going to be some documentaries that I’d like to produce,” she told THR.

One of the documentaries will be about the Ellen DeGeneres Campus of the Dian Fossey Gorilla Fund, a science and education campus in Rwanda committed to securing a future for wild mountain gorillas.

DeGeneres also welcomed Billie Eilish and Pink to the show – the former made her daytime television debut on Ellen, while the latter wrote and recorded the theme song for the show, Today’s The Day.

“I love you so much, it’s dumb,” said Pink, who later performed her song What About Us.

The end (for now)

DeGeneres, near tears, thanked her crew one final time as well as the audience for joining her over the past 19 years.

“I’ve said it before, but I’ll say it again: If I’ve done anything in the past 19 years, I hope I’ve inspired you to be yourself. Your true, authentic self and if someone is brave enough to tell you who they are, be brave enough to support them even if you don’t understand,” she said.

“Thank you so much for being on this journey with me, I feel the love and I send it back to you. Bye.”

DeGeneres ended the show the way it kicked off 19 years ago – sitting on a couch, with her back to the audience, watching herself on TV.

But this time, she switched the TV off.