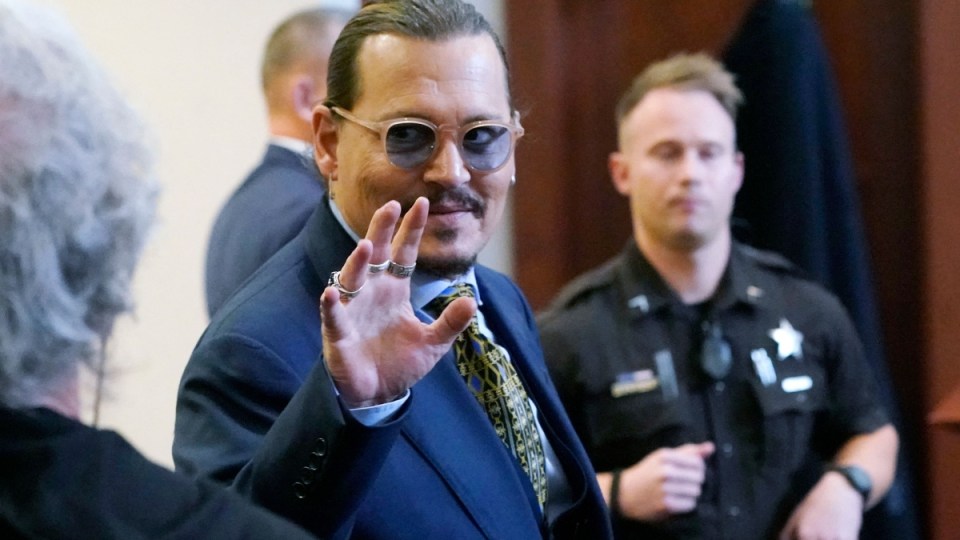 A surgeon has cast doubt over Johnny Depp's court story of how he lost the tip of his middle finger. Photo: Getty

A hand surgeon has testified Johnny Depp could not have lost the tip of his middle finger the way he told jurors it happened in his civil lawsuit against ex-wife Amber Heard.

The finger injury, which occurred in a March 2015 fight in Australia between Depp and Heard, has been one of several key points of dispute in the lawsuit.

Depp says he was injured when Heard threw a vodka bottle at him.

Heard has said she never saw specifically how it happened, but claimed it occurred on a night when an enraged Depp sexually assaulted her with a liquor bottle.

Meanwhile, supermodel Kate Moss will testify in the heated case on Wednesday. It follows statements on the stand by Heard that alluded to a rumoured domestic incident between Moss and Depp when the pair dated in the 1990s.

Heard told the court about an alleged fight between Depp and her sister Whitney Henriquez near a staircase in 2015.

She said she punched Depp over her concern he could have pushed her down the stairs, stating she thought about “Kate Moss and the stairs”.

Moss will reportedly testify via video link, according to US media.

Depp is suing Heard for libel in Fairfax County Circuit Court over a December 2018 article she wrote in The Washington Post describing herself as “a public figure representing domestic abuse”.

His lawyers say he was defamed by the article, even though it did not mention his name.

Depp has denied ever striking Heard, and says she was the abuser in the relationship.

Heard has testified about more than a dozen separate instances of physical abuse she says she suffered at Depp’s hands.

In testimony on Monday, surgeon Richard Moore testified about the severed finger as jurors saw gruesome photos of the injury.

He said Depp described his palm as being down on a bar when it was struck by the bottle.

Dr Moore, who did not treat Depp, testified Depp’s description was unlikely, in large part because his fingernail remained intact.

Dr Moore said the fingernail was exposed, as Depp described the placement of his hand, and would have been damaged. Dr Moore also said there would have been other cuts on Depp’s hand from the glass that shattered on impact.

While Depp told the jury Heard severed the finger by throwing a vodka bottle, at the time of the accident he told people and sent text messages saying he had done it to himself.

At one point he said the finger had been pinched between solid accordion doors.

Depp now says he lied to protect Heard. Dr Moore testified getting the finger pinched in accordion doors would be consistent with the injury.

The trial is in its sixth week. Monday’s testimony was relatively mundane in a trial that has provided an ugly glimpse into the couple’s toxic relationship.

There had been an expectation Heard’s lawyers were going to call Depp to the stand on Monday, but that did not occur.

Heard’s lawyer Elaine Bredehoft said at the end of the day they were still discussing whether to call him.

Jurors have already heard extensively from Depp and Heard – each was on the stand for four days.

Also on Monday, a psychiatrist testified Depp’s behaviour fitted the pattern of a person whose drug and alcohol abuse contributed to domestic violence.

Depp’s lawyer Wayne Dennison questioned the ethics and credibility of the psychiatrist’s opinions, given he has not examined the Pirates of the Caribbean actor.

Heard has filed a counterclaim against Depp based on those statements.

Ms Arnold said she measured Heard’s career against “comparable” stars like Gal Gadot, Jason Momoa and Zendaya to show where Heard’s career would have gone if Depp lawyer Adam Waldman had not defamed her.

Mr Dennison, in his questioning, scoffed at the notion that Heard was in the same league as those stars.

Kirstie Clements: How to save money on fashion and still look great
Queen all smiles in flower show buggy
Today's Stories