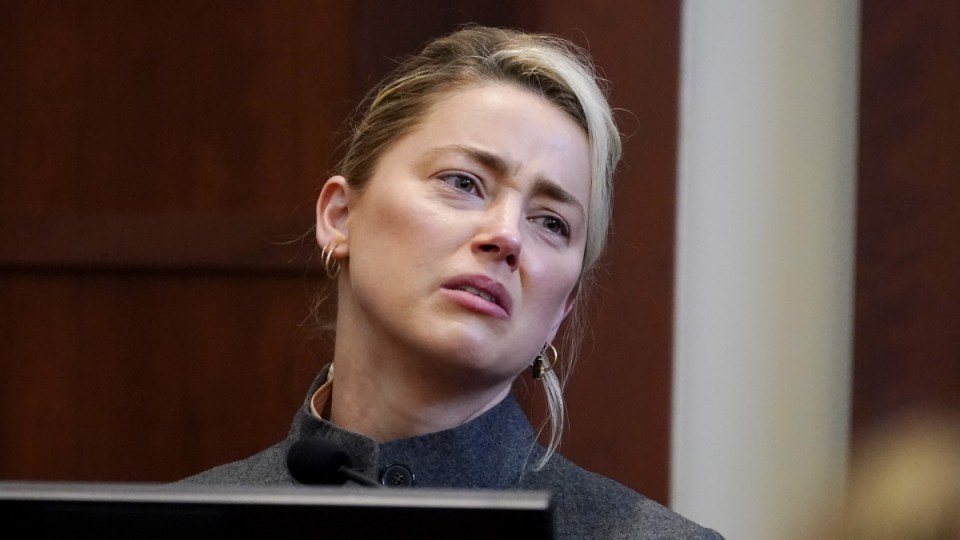 Amber Heard says filing for divorce "was hard because I loved Johnny so much". Photo: AAP

Amber Heard has told jurors in a defamation case that she filed for divorce from Johnny Depp in 2016 because she worried she would not survive physical abuse by him.

Under questioning by her lawyers, Heard said she acted after the Pirates of the Caribbean star threw a mobile phone that hit her in the face.

The incident made her realise the marriage was “falling apart” despite her attempts to repair it, she said.

“I knew I had to leave him,” the Aquaman actor told a Virginia court on Monday.

“I knew I wouldn’t survive it if I didn’t.

“I made the decision to file for divorce. It was hard because I loved Johnny so much.”

Jurors were shown photos of Heard with redness and swelling on her face that she said was caused by being struck by the phone.

At this point, “the violence was now normal and not the exception”, Heard said.

In earlier testimony, Depp said he never hit Heard or any woman and argued she was the abuser in their relationship.

During cross-examination on Monday (US time), Depp’s lawyers introduced photographs of Heard making public appearances after times that she said Depp had struck her.

The pictures shown to jurors appeared to reveal no injuries. Heard said the harm, which included what she thought was a broken nose, was not severe enough to be visible or was covered up by make-up.

Heard has countersued for $US100 million, arguing Depp smeared her by calling her a liar.

The pair wed in February 2015 and their divorce was finalised about two years later.

Heard said Depp hurled the phone at her during an argument in May 2016 at his Los Angeles penthouse.

The episode is one of several that Heard has described in which she said Depp assaulted her.

In his testimony, Depp said Heard was the violent one and in early 2015 threw a vodka bottle that cut off the top of his right middle finger.

Heard denied severing Depp’s finger and said she only hit him to defend herself or her sister.

She also denied Depp’s allegation that she had left faeces in a bed at one of his homes following a fight on her birthday.

A security guard had testified that Heard told him the faeces were a “horrible practical joke”.

Heard said she did not commit any prank that day, adding she was “not in a pranking mood”.

“I had just been attacked on my 30th birthday by my husband, with whom I was desperately in love and knew I needed to leave,” she said.

The case in Fairfax County Circuit Court hinges on a December 2018 opinion piece by Heard that appeared in the Washington Post. The article never mentioned Depp but he alleges it was clear Heard was referencing him.

Depp, once among Hollywood’s biggest stars, said Heard’s allegations cost him “everything”. A new Pirates movie was put on hold, and Depp was replaced in the Fantastic Beasts film franchise, a Harry Potter spin-off.

Heard’s lawyers have argued she told the truth and her opinion was protected free speech.

Closing arguments are scheduled for May 27.