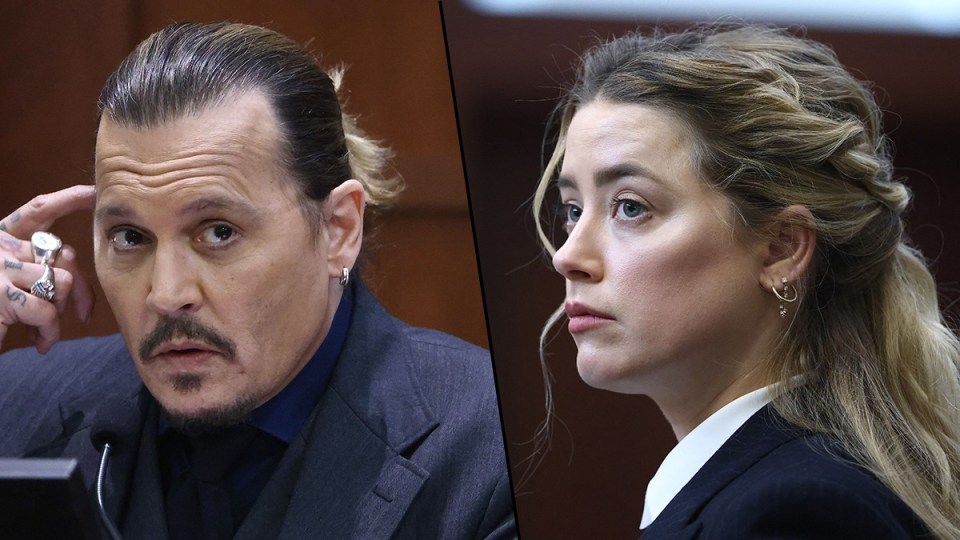 Depp took to the stand on April 19, and is expected to continue being cross-examined this week. Photo: Getty

From vulgar text messages to domestic violence allegations, there was a lot to unpack from Johnny Depp’s first week on the stand in his defamation trial against ex-wife Amber Heard.

Depp is suing Heard for $US50 million ($69 million) over a 2018 op-ed she wrote for The Washington Post, in which she opened up about surviving domestic violence.

The op-ed never mentioned Depp, 58, by name, but his lawyers argue that Heard, 36, was clearly referencing him and irreversibly damaged his film career and reputation.

The trial is nothing short of a spectacle, televised live via various media outlets and streamed on social media platforms.

Depp first took to the stand on April 19, and is expected to continue being cross-examined when proceedings resume in Fairfax, Virginia on Monday, local time.

Here are some of the takeaways from Depp’s testimony so far.

Instead, he said Heard was the aggressor in their relationship.

“There were arguments and things of that nature, but never did I myself reach the point of striking Ms Heard in any way, nor have I ever struck any woman,” Depp said.

Regardless of the trial’s outcome, Depp feels he has already “lost”.

“It’s pretty strange when one day you’re Cinderella, so to speak, then in 0.6 seconds, you’re Quasimodo. I didn’t deserve that, nor did my children, nor did the people who have believed in me for all these years,” he said.

The actor and his older sister, Christi Dembrowski, testified that their late mother Betty Sue Palmer was abusive toward them when they were children.

They claimed she was also abusive toward their father John Depp, who is now 84.

“When Betty Sue, my mother, would go off on a tangent toward my father – and of course – in front of the kids, it [didn’t] matter to her. He amazingly remained very stoic and never, as she was rationing him with horrible things, he stood there and just looked at her while she delivered the pain, and he swallowed it. He took it,” Depp said.

He explained that he stayed in the marriage to Heard because he “didn’t want to fail”.

Depp told the court that in April 2016, his security guard warned him against returning to his shared residence with Heard because there was a problem.

Depp said his initial response was to laugh.

“It was so bizarre and so grotesque that I could only laugh.”

According to Depp, Heard “tried to blame it on the dogs”.

“They’re teacup Yorkies. They weigh about four pounds each. The photograph I saw – I lived with those dogs for many years … That did not come from the dogs.”

Depp gave his account of several confrontations, including a now-infamous incident in 2015 when he and Heard were in Australia for the filming of the fifth Pirates of the Caribbean movie.

The actor said Ms Heard was upset about a potential post-nuptial agreement and that she believed he was trying to trick her into getting nothing if something were to happen.

Depp told her those were not his intentions and tried to calm her down, but he alleged the situation only escalated into “chaos” and “violence”.

He testified that the situation pushed him to break his sobriety and that Heard, after finding him drinking again, threw a large bottle of vodka at him.

He said it shattered onto his hand, seriously injuring his middle finger.

“I looked down and realised the tip of my finger had been severed. I was looking directly at my bone sticking out … Blood was just pouring out.”

Depp spoke of experiencing a nervous breakdown and writing on the walls with his bloodied finger.

He held out his now-healed “mangled” finger to the jury and described it as “funny looking”.

At the hospital, Depp said he lied to the doctors because he didn’t want to “get her [Heard] in trouble”.

Presented with a photo of himself in the emergency room, Depp recalled a moment he said happened after his finger was severed.

“Ms Heard had taken my cigarette from the ashtray and stomped it out on my face,” Depp alleged.

In audio recordings presented by Depp’s legal team, Heard admitted to having started a physical fight with him.

Heard argued she didn’t “punch” him, but was “hitting” him.

“I’m not sitting here b—-ing about it, you are. That’s the difference between me and you. You’re a f—ing baby. You are such a baby! Grow the f— up, Johnny!”

Heard’s attorney Ben Rottenborn focused on Depp’s drug and alcohol use and how it fuelled his alleged violent behaviour.

In one video, Heard recorded Depp slamming and kicking cabinets in their kitchen and pouring himself a glass of wine.

“Clearly I was having a bad time,” Depp said.

“I don’t know what it is in regards to … Being illegally recorded by your chosen other is quite fitting with the rest of the photographs and tape recordings she made. I thought what was most interesting was she tried to hide it [the camera] from me and smiled and laughed at the end … Yes, I did assault a couple of cabinets, but I did not assault Ms Heard.”

Questioned about his friendship with Marilyn Manson, Depp launched a charm offensive.

“Yes, we drank together and we’ve had cocaine together maybe a couple of times,” he answered.

He said he once gave Manson a pill “so that he would stop talking so much”, causing some spectators at the trial to laugh.

And when Depp was asked whether he had whisky in the mornings while shooting The Lone Ranger (2013), Depp replied, “Isn’t happy hour anytime?”

At one point during the cross-examination, a photo of Depp seemingly passed out with melted ice cream in his lap was shown to the court. And a text message exchange between Depp and his friend and fellow actor Paul Bettany was read.

“Drank all night before I picked Amber up to fly to LA this past Sunday. Ugh, mate. No food for days. Powders. Half a bottle of whisky. An aggro injun in a f—ing blackout, screaming obscenities and insulting any f— who got near,” the text from 2013 read.

When Depp was asked about a December 2015 incident where he allegedly headbutted Heard, he “vehemently” denied intentionally hurting her.

He argued that it was an accident.

“I was trying to restrain Ms Heard, and once I had restrained her, I would say if she’s trying to still move around and kick at me or trying to get loose, any sort of movement when you’re like this, your heads are this close together, it’s not impossible for them to bump. But a ‘headbutt’, that’s a pretty extreme definition of that.”

Mr Rottenborn also played an audio clip of Depp speaking about “the day I chopped my finger off” in Australia in 2015, contradicting his earlier testimony that Heard had severed his fingertip with a vodka bottle.

The Aquaman star has not yet testified.

But in opening statements, Mr Rottenborn claimed his client had suffered domestic abuse at the hands of Depp, which “took many forms”, including physical, emotional, verbal and psychological abuse.

“You will hear in the most graphic and horrifying terms about the violence that she suffered,” Mr Rottenborn said.

“You’ll hear straight from her. She will get on the stand and she will tell you that. It happened.”