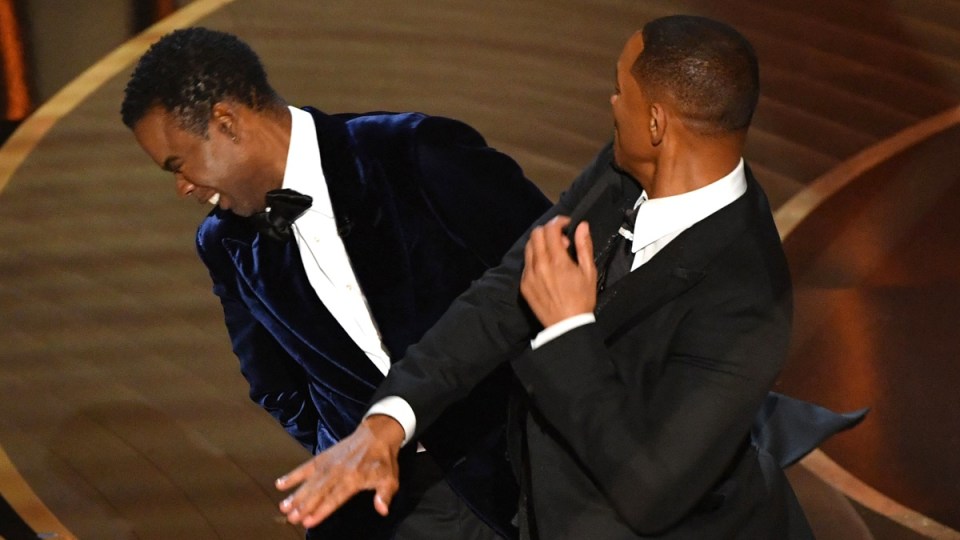 Chris Rock reels as Will Smith expresses his displeasure at a gag about his wife. Photo: Getty

Los Angeles police were prepared to arrest Will Smith following his on-stage assault of presenter Chris Rock at the Oscars, producer Will Packer says.

There was also another twist on Friday in the saga that began when Smith slapped Rock and yelled expletives following a joke about Smith’s wife, Jada Pinkett-Smith, during this week’s live broadcast – as footage emerged of her surprise reaction.

“They were saying this is battery, that was the word they used at that moment, they said, ‘We will go get him, we are prepared to go get him right now’,” Mr Packer says in a clip from Good Morning America.

“‘You can press charges, we can arrest him’, they were laying out the options.

“As they were talking Chris was being very dismissive of those options, he was like, ‘No, I’m fine’ … and even to the point I said, ‘Rock, let them finish’.”

No charges have been filed against Smith.

“The other LAPD officers finished laying out what his options were and they said, ‘Would you like us to take any action and he (Rock) said no’,” Mr Packer said.

Meanwhile, footage circulating on Friday showed Pinkett-Smith apparently laughing in the moments after her husband’s hit on Rock.

First shared on TikTok, it appears to show Pinkett-Smith throwing her head forward in what looks like laughter, as a stunned Rock says: “Will Smith just smacked the s— out of me”.

On Thursday, the Academy of Motion Picture Arts and Sciences said it had begun disciplinary proceedings against Smith. He faces “suspension, expulsion or other sanctions” at a board meeting on April 18.

However, claims that the star was formally asked to leave the ceremony after the slap were denied on Friday. An Academy source said there was no explicit request.

It was reported on Thursday that Academy president David Rubin and chief executive Dawn Hudson had told Smith’s management that they wanted him to leave the Dolby Theatre after the assault. Smith was said to have refused.

The New York Times and Variety reported earlier this week there were conversations among Academy members about removing Smith. But no decision was made before he was named the best-actor winner less than half an hour later.

“Love will make you do crazy things,” Smith said in his acceptance speech, with tears running down his face.

Smith pointedly did not apologise to Rock at the time. He did a day later, saying in an Instagram post that he was “out of line” and that there was “no place for violence in a world of love and kindness”.

Rock made his first public comments on the incident on Thursday.

“How was your weekend?” he asked the audience at a comedy gig in Boston.

“I don’t have a bunch of s— about what happened, so if you came to hear that, I have a whole show I wrote before this weekend.

“At some point I’ll talk about that s—. And it will be serious and funny.”