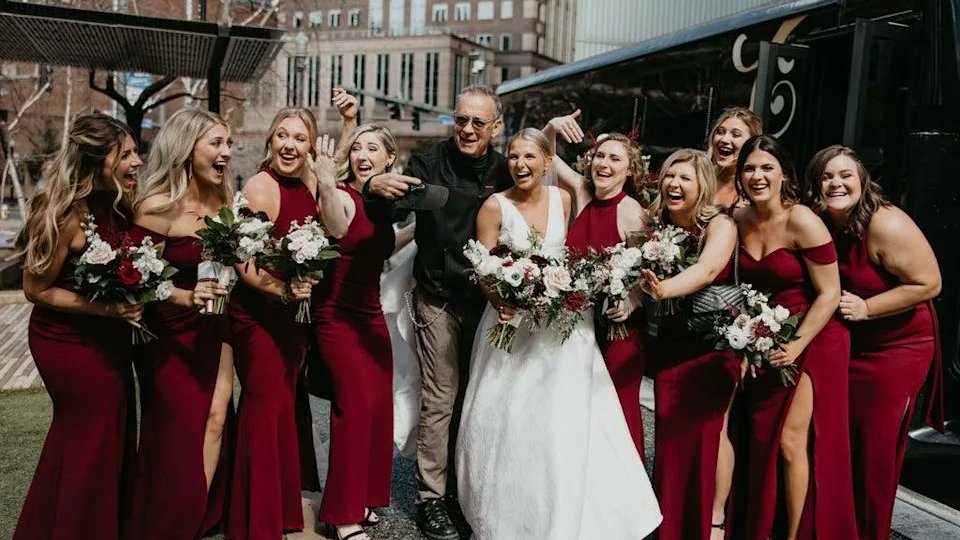 Tom Hanks has turned wedding gate-crasher again, joining a bridal party for surprise happy snaps in a wholesome encounter ahead of her ceremony.

The Cast Away actor, 65, was leaving his Fairmont Hotel in downtown Pittsburgh on Sunday when he came across the wedding party getting ready to leave for the ceremony.

Hanks, who is in Pittsburgh filming for A Man Called Otto, “ran up” behind the bride – who was about to enter a waiting limousine – and asked her for a photo.

“We were leaving the hotel (he is staying there while filming a movie here) and getting on to the limo when he literally ran up behind the bride,” wedding photographer Rachel Rowland told US media.

“We were all pretty shocked and I just started snapping to get some good candids. He said, ‘my name is Tom Hanks! Can I take a photo with the bride?’ and just joyfully laughed and posed.”

Rowland said Hanks, who was with his wife Rita Wilson, stayed for just a few minutes before he said his goodbyes and left.

“The bridesmaids shuffled out of the limo, and he posed with photos and congratulated everyone, and then as fast as he popped in, he was gone,” she said.

“It was just so sweet and fun… We all lost it.”

Bride Grace Gwaltney told US media she froze when Hanks said he would love to get a photo with her. She said she was so surprised she looked around, unsure of what to do – and if even it was really the Hollywood star.

She admitted the actor’s recognisable voice confirmed to her she was meeting Hanks.

“You see him and then he starts speaking and he was like, ‘You look so beautiful. I’m so happy for you.’ He was talking in my ear,” Ms Gwaltney told People magazine.

“I was thinking of Toy Story.”

She said she was so excited by the surprise encounter she “had to sneak in” to tell her new husband before they got married.

Hanks has something of a history of crashing wedding snaps. Last year, he joined the photos of brides Diciembre and Tashia Farries while walking on the beach in Santa Monica.

“We had a beautiful ceremony and go to take photos with our photographer and we line up our family and Tom Hanks walks through the crowd and asks to take a photo with us.”

She said Hanks told the couple they were both beautiful, and stayed to chat for a few minutes.

In 2016, he spotted a wedding while running in New York’s Central Park. The bride and groom invited him to take part in their photos and Hanks even posted a shot on his Instagram. “Elizabeth and Ryan! Congrats and blessings! Hanx,” he wrote.

Dennis Atkins: Morrison lost an election he should not have lost. And he still doesn’t get why
Kylie Minogue’s massive hint at new Qantas tie-up
Today's Stories