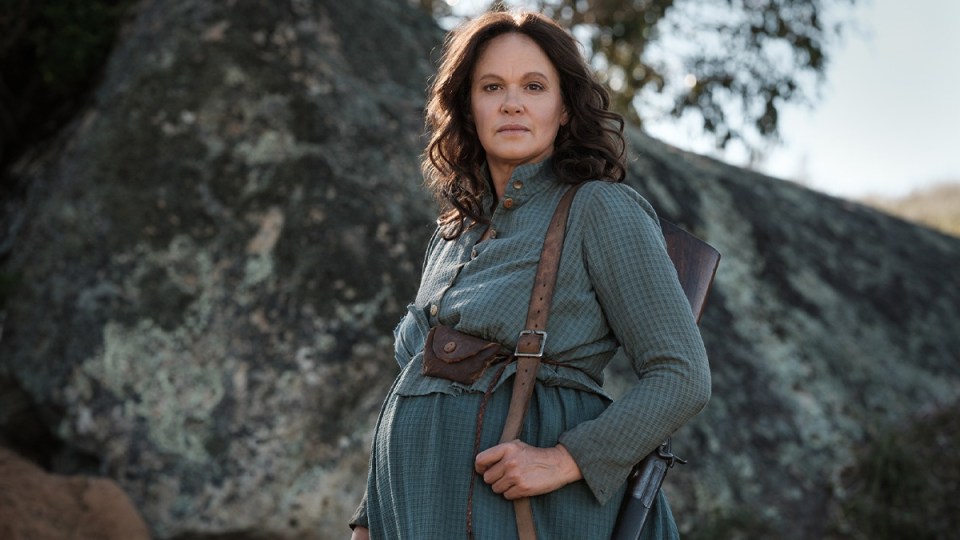 Leah Purcell holds nothing back in her re-imagined period Western. Photo: Roadshow

It’s a timeless classic. A dramatic, Australian short story penned by poet Henry Lawson back in 1892.

It tells the story of a woman left alone with her four children after her husband heads off droving sheep for three months.

She’s known only as the drover’s wife. She stays behind in a small shack in the Australian outback and she’s never identified by name.

We all know the classic moment where one of the children yells out ”Snake! Mother, here’s a snake!”. Armed with a shotgun, she stays up all night in the kitchen, and watches over her beloved children, waiting for the snake to come out from under the floorboards and be killed.

She fights fires and floods, fends off unwanted visitors, and even kills and skins a mad bull.

Fast-forward to putting that original storyline into the hands of Leah Purcell (Wentworth, Jindabyne), and you end up with a turn-of-the-century Western with an inspirational new take.

In doing so, The Drover’s Wife: The legend of Molly Johnson becomes the first Australian feature film with an Indigenous woman writing, directing and performing the lead role.

Purcell, 51, tells The New Daily her mother was the inspiration for re-imagining the story, which she turned into a 2016 play as well as a novel.

“She had a book of Henry Lawson’s short stories and that was the one she would recite to me. The story stayed with me for a very long time,” she said.

“I guess it was the first time I could use my imagination. I saw myself as that little boy.

“My mother was the drover’s wife, there was no man at our place, no father figure. We had a combustion stove, she taught me how to stack a wood heap.

“Seeing her, putting myself in that story … and when I was writing it, how do I play this role?”

Purcell says the Black Mary character in the original Lawson story could be Molly’s mother, and that opened up a “Pandora’s Box of putting in Indigenous issues to layer it, to enrich” the storyline.

“I’m a woman brought up by storytellers, within a culture where the tradition of storytelling is passed down and our histories are heard from the black experience, not from white-washed history books,” she says.

She said it was her partner and fellow producer Bain Stewart who encouraged her.

“He said, ‘as Indigenous First Nations people, if we can’t tell our stories as truthfully as we can, then who is going to?'”

“[So] away I went, re-imagining it and flipping it.”

With a screening in London on March 8 to mark International Women’s Day, Purcell’s film literally rewrites white Australian literary history, using Lawson’s short story as a “Trojan horse to enter the Australian psyche and shift it”.

“I am loyal to Henry Lawson, but also emotionally engaged with the other stories and that allowed me to put in, within the film, the domestic violence issues, the stolen generation issues, the Black Lives Matters issues (she says not inspired by the US but by issues from the 1970s with her peers).

“I never set out to write those issues.

“They are personal stories. Yadaka (the Indigenous escaped prisoner who arrives at her hut and together they form a close bond, played by Mystery Road actor Rob Collins) is based loosely on my great grandfather, and the words from stockmen come from my (family) diary that was written about those times and his life.

“As a writer I love hanging things on history. These are my family’s stories.

“Molly Johnson was my mother, my grandmother, me, my aunties.”

The film is, at times, shockingly brutal, but in the end it’s a story of hope.

“At my film’s core is a mother who will do anything for her children and young boy who will stand by his mother, no matter what.

“It’s about love, protection, identity and the survival of family with a soul of ancient proportions.”

Filmed in the Snowy Mountains in 2019, Purcell recalls one scene with Collins where smoke from the devastating 2019-20 bushfires was heading their way.

“Unfortunately people’s land and houses were burning, but it just set the right atmosphere for [one] scene. I just said to Rob, ‘I don’t want us to perform, I just want us to be in this moment.’

“And remembering that he’s a man who has been on the run, and his touch has only been violent; he lost his family to a massacre, is living off the land and trying to keep one step ahead of white authority who had commissioned to shoot him on site, no matter what he’d done.

“And we just sat in it. I turned to Mark [Wareham, Director of Photography], I said, ‘you need to feel us as well.’ That’s one of my favourite scenes, and it’s one of those moments where we were lost in it.”

“The story is intimate and also has an epic feel.

“It is unique in having as its protagonist an Aboriginal woman.”

This is not the first screening of Purcell’s feature directorial debut.

It was included in the South by SouthWest film festival’s online program in March last year in Austin, Texas, receiving praise from Screen Australia, who helped fund the project.

It was then selected as one of three films for a $100,000 jury prize to be shown at CinefestOZ in Western Australia, and then was included in the Sydney Film Festival program in November last year.

On International Women’s Day, on March 8, it premiered in London.

Screen Australia Chief Executive Office Graeme Mason said: “This is a remarkable feat and it’s fantastic to have this powerful First Nations story celebrated on the world stage.

The Hollywood Reporter review at the time said, “Purcell deserves credit for the complexity of this multi-layered story … the engrossing thriller is admirably ambitious”.

Purcell notes that while the film is set in 1893, the issues it raises in 2022 “are all still very relevant”.

“I want this film to bring about conversation,” she says.

“I want people to sit in the cinema and take a breath. I want them to think about their grandmothers, their daughters and the future. I want that discussion and hopefully change can come out of it having those issues in your face.

“Years down the track, you realise how much of a classic it is, and much loved by Australia.

“It really touches people in regards to women’s issues and how women were treated back in those days, and how women are still treated today.”

With bushfires and smoke all around them during filming, she recalls the women and children fleeing their homes while their husbands left to fight fires.

“The fires were there. Women were doing exactly what Molly Johnson had to do, making decisions on their own for the survival of them and their children while their husbands were out fighting the fires.”

“They were doing a Molly Johnson.”

There’s a bit of Molly Johnson in all of us, right?

Purcell replies: “Yes, exactly. I want a little bit of Molly Johnson in all of us.”