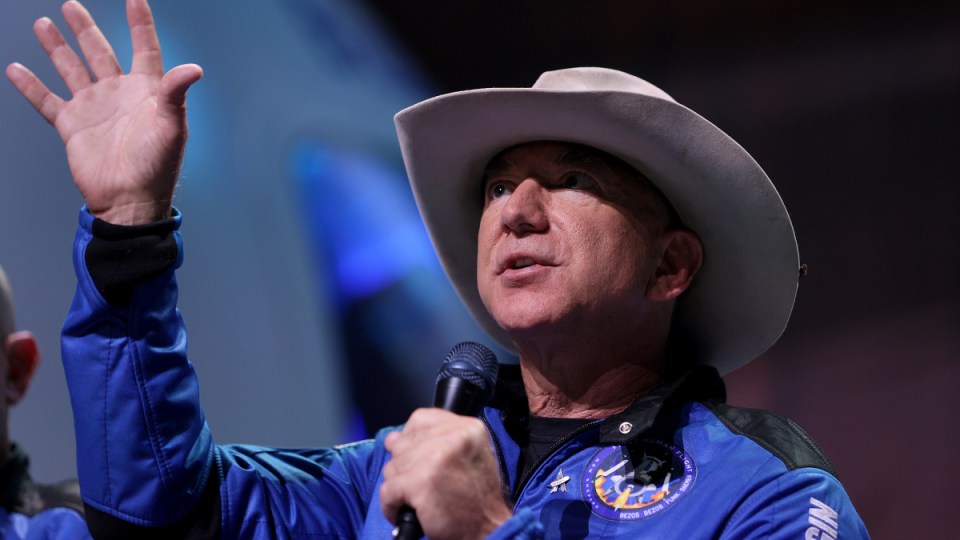 Jeff Bezos said humans will be visiting Earth like they do national parks in the near future. Photo: Getty

Billionaire Amazon founder Jeff Bezos has a vision for humanity beyond Earth, predicting that one day humans will be born in space and take holidays to their former home.

Mr Bezos said people would build colonies in space as Earth was too small to sustain humanity’s current growth and energy usage.

“Over centuries, many people will be born in space. It will be their first home,” Mr Bezos said.

Detailing ideas for cities, agricultural areas, high-speed transport, and national parks in space, the founder of Amazon and Blue Origin made the comments in an address to the Ignatius Forum in Washington DC this week.

But it’s not the first time he has raised the prospect of floating space colonies – and his space company Blue Origin has even released artistic renderings.

In 2019, Mr Bezos said he wanted to create space colonies for up to one trillion people with hypothetical technology known as O’Neill cylinders.

The spinning cylinders, designed by physicist Gerald O’Neill in 1976, are said to rotate and replicate the Earth’s gravity, providing sustainable life for humans, animals and plants.

“This is Maui on its best day, all year long,” Mr Bezos said of the technology in May 2019.

“No rain. No earthquakes. People are going to want to live here.”

Their efforts to promote commercial space trips for wealthy tourists have often devolved into a war of words, with Mr Bezos and Mr Musk claiming their superiority to lead humanity into an interplanetary future.

In April, NASA awarded SpaceX a contract worth $2.9 billion to build a spacecraft that would carry astronauts to the Moon’s surface as early as 2024, triggering Mr Bezos’s Blue Origin to launch a lawsuit against Mr Musk’s company.

“You cannot sue your way to the Moon, okay?” Mr Musk tweeted.

“No matter how good your lawyers are.”

But Mr Bezos added fuel to the fire at the Ignatius Forum, jabbing at Mr Musk’s claim last year to develop human life and settlement on Mars by 2026.

He believes colonies are a better strategy than Mr Musk’s idea of restarting life on another planet.

“Even if you were to terraform Mars or do something very dramatic like that – which could be very, very challenging, by the way – even if you were to do that, that is, at most, a doubling of Earth,” Mr Bezos said.