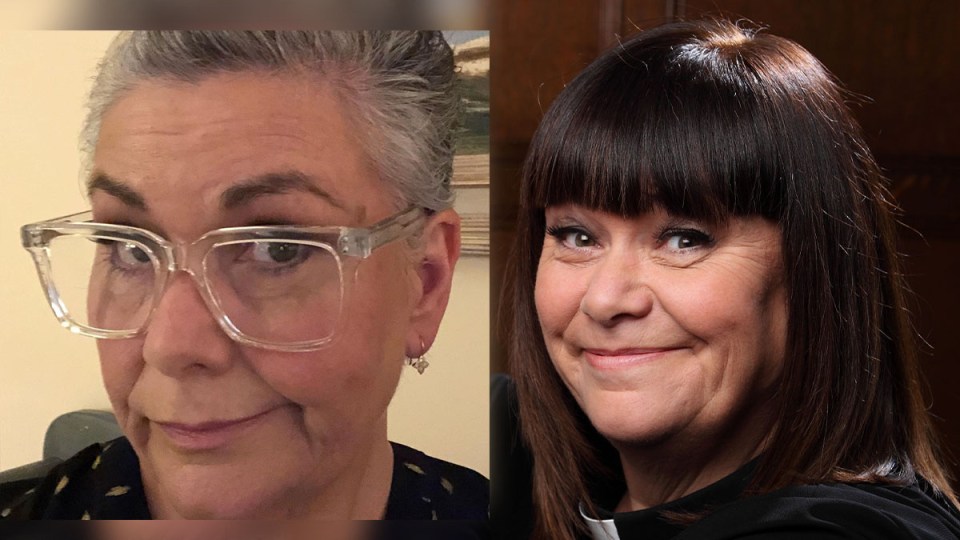 Dawn French has chopped off the last of her coloured hair to embrace the grey. Photo: Instagram/Getty

British actor Dawn French is sporting a new look – and her transformation has been given the Queer Eye tick of approval.

Perhaps best known for her role as Geraldine Granger in BBC series The Vicar of Dibley, French has done away with her signature brown bob.

The star, who will be 64 on October 11, has shorn off her coloured locks to make way for her natural grey.

Posting photo updates to her Instagram account, French said she was working up to 50 shades, while already embracing three.

The comedian suggested either comparison was complimentary, praising both as “Ishtar” – Goddess of Love, Fertility and War.

The elegant new hairdo has been endorsed by fashion designer Tan France, an expert on everything makeovers and co-star of the Netflix series Queer Eye.

“I love that you’re embracing the grey! It looks so chic on you,” France wrote.

French said the style is another step towards growing back her famous bob, this time in “full grey glory”.

The funny woman is not shy about her age and has referred to life after 60 as the autumn years. She is a firm advocate for growing old gracefully.

Earlier in 2021, French shared another progress photo with the caption: “Going lighter bit by bit to happily welcome the grey – Hello there woman in her 60s.”

Dawn is among a cohort of stars opting for a more natural glamour, as ‘Grombre’ takes over the world.

What the heck is Grombre?

Not just a trending hashtag on Instagram, Grombre is a “global movement of women who are embracing natural, undyed hair”, according to its website.

Essentially, it is all part of a shift towards natural, grey hair becoming cool, fashionable, and more than acceptable in the usually punishing and unreasonable standards of feminine ‘beauty’.

Although it is hard to say which came first, the celebrities or the hashtag.

Sex Education star Gillian Anderson, for example, was lauded for her short, white blonde hairstyle in the first season of the Netflix series.

Some thought she was aboard the #grombre train.

But the 53-year-old has since appeared as a darker blonde, so she cannot yet be counted among those who have left the dye behind.

She claims to actually be a brunette, but the lighter hue suited her well and by her own account, allowing herself to go grey would be “a big decision”.

Anderson is a grey area, maybe even #grombre hesitant?

But French is all in and she’s not alone.

“Men get old and we keep loving them. I want to be like a man,” she said defiantly.

MacDowell could easily have been referring to one of the more celebrated silver foxes of the century – George Clooney.

When a 48-year-old Clooney realised he had gone grey, he was shocked at first, according to GQ.

“I was watching Up in the Air and I thought, ‘Jesus, who’s the old, grey-haired guy?’ And it was me,” he said.

But the hue has not put a dint in his superstar status, nor should it.