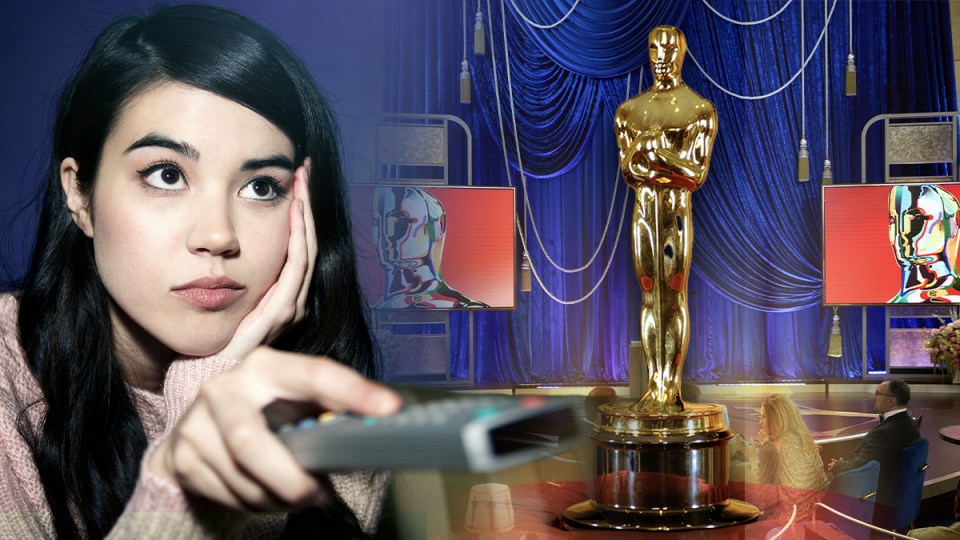 This year's ceremony was one of the blandest in history. Photo: Getty/TND

It’s supposed to be Hollywood’s night of nights, but the 93rd annual Academy Awards were more flop than fabulous.

The witty quips and savage social commentary was at an all-time low, as the Oscars went without a host for the third (and hopefully last) year in a row.

Sure, that means we didn’t have to relive a cringeworthy opening monologue from James Franco and Anne Hathaway, but it also means we missed out on a Broadway-inspired musical number from Neil Patrick Harris.

The ceremony was produced by legendary Hollywood director Steven Soderbergh (Erin Brockovich, Ocean’s Eleven), who largely opted to have presenters describe the nominees rather than show short clips of the films.

Soderbergh also forewent the traditional musical performances by the best song and best original score nominees, which are usually speckled throughout the evening.

At least the red carpet tradition brought some colour and quirk to the event, with novelty clutches, big shoulders and a pair of gold Crocs adding some visual interest to the night.

Reliable red carpet veterans Halle Berry and Reese Witherspoon injected a touch of glam while Laura Dern lit up social media with a dress reminiscent of the 2001 Oscars which one Twitter user described  as “Business on top, Bjork at the bottom”. 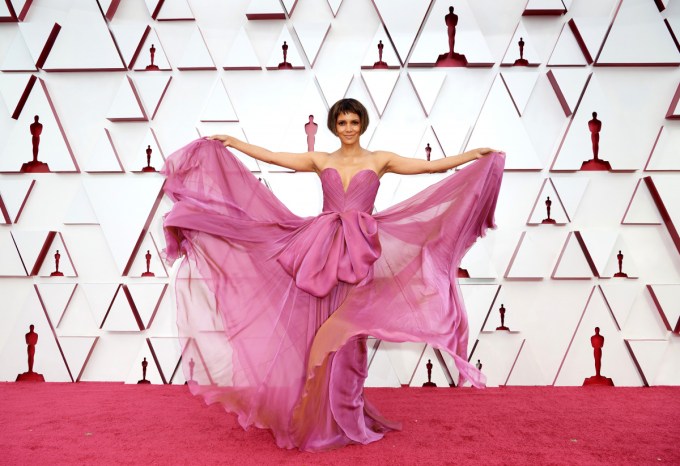 Halle Berry’s strapless Dolce & Gabbana gown was really something ... But her bowl cut made her look a bit like a pencil. Photo: Getty 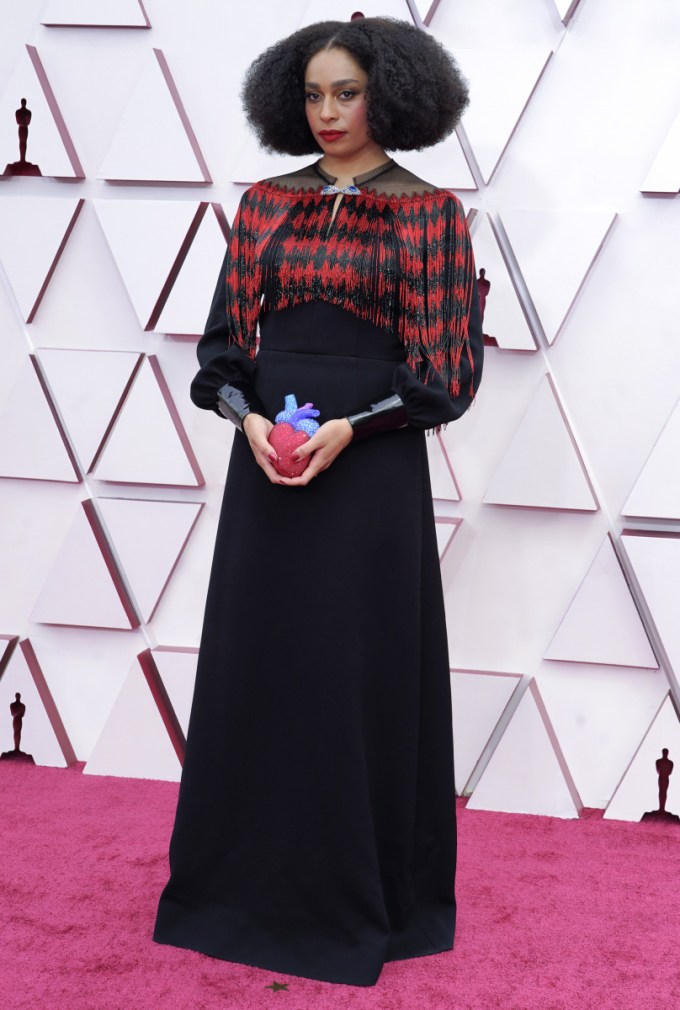 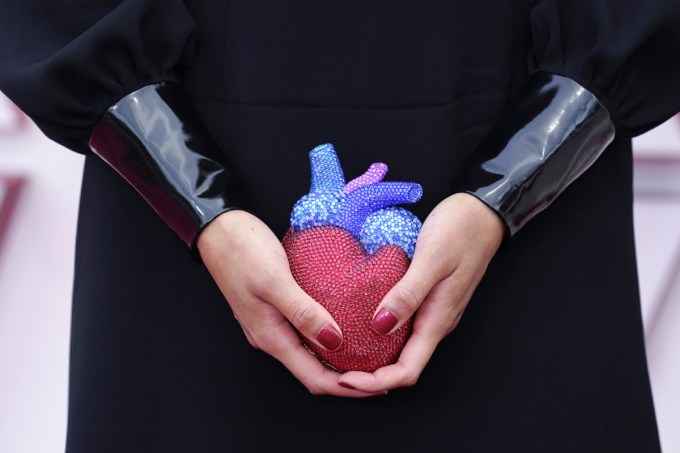 Celeste Waite's anatomical heart clutch from Gucci gets a nod of its own. Photo: Getty 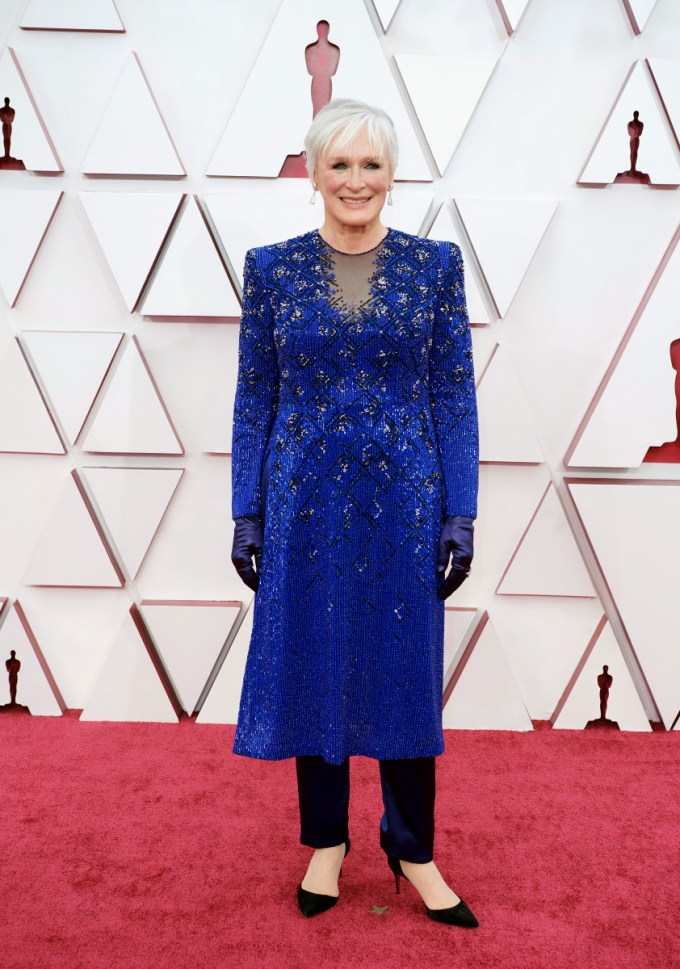 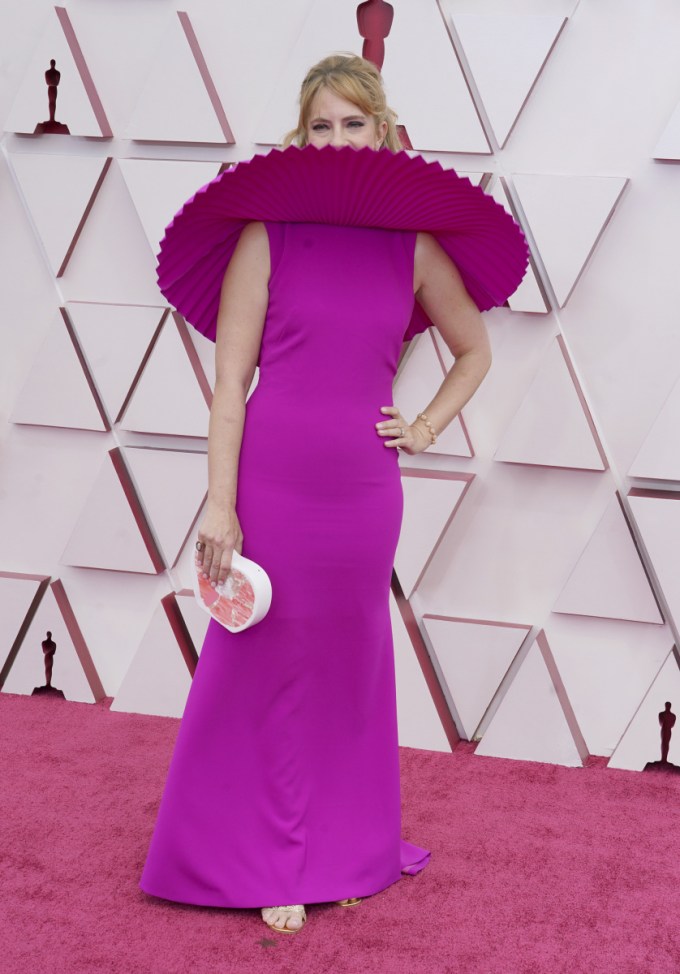 The clutch was a statement but 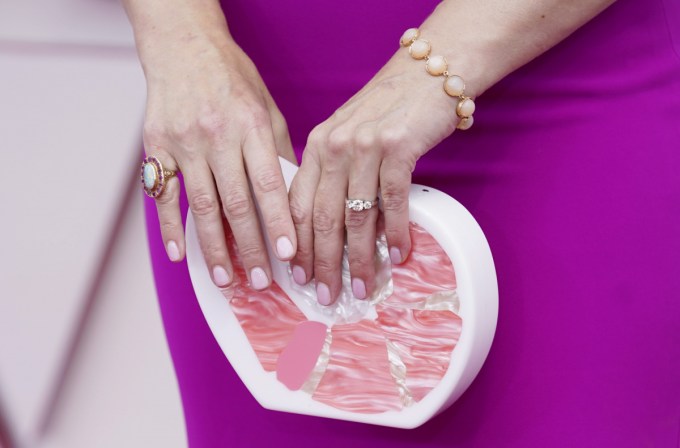 Erica Rivinoja’s prawn clutch by Edie Parker was more fun than the rest of the ceremony. Photo: Getty 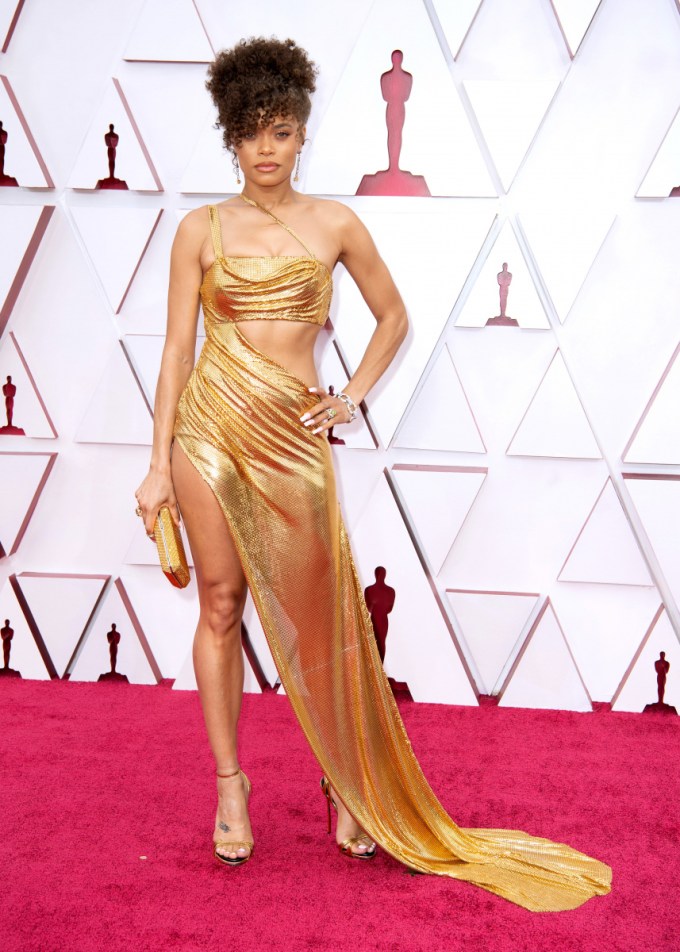 Andra Day wore the hell out of a custom Vera Wang number in gold. Photo: Getty 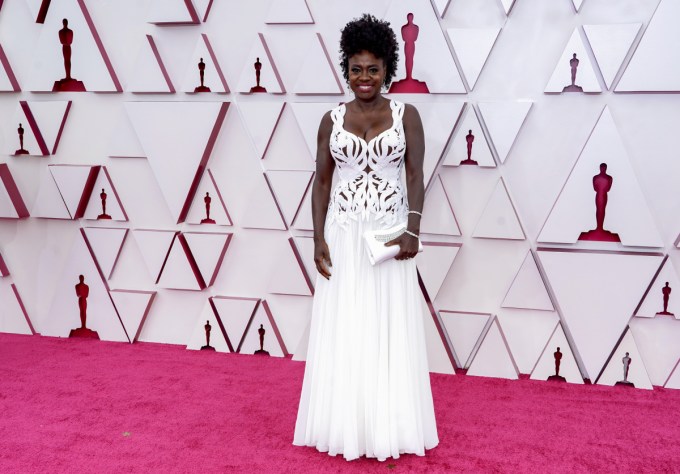 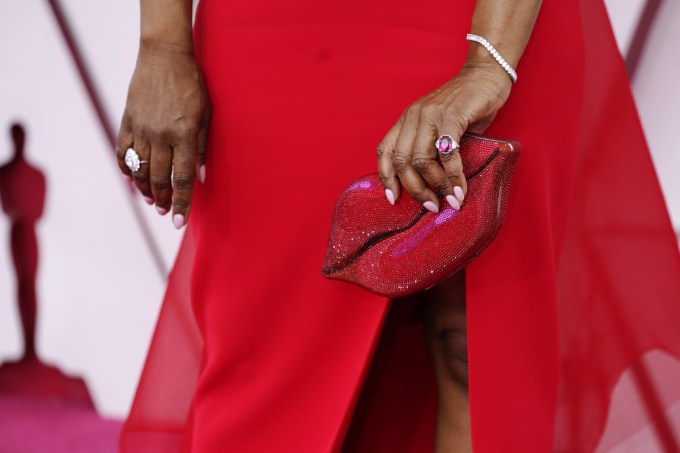 Angela Bassett’s Judith Leiber clutch is worthy of a mention. Apparently ‘novelty bags’ was a bit of a theme. Photo: Getty 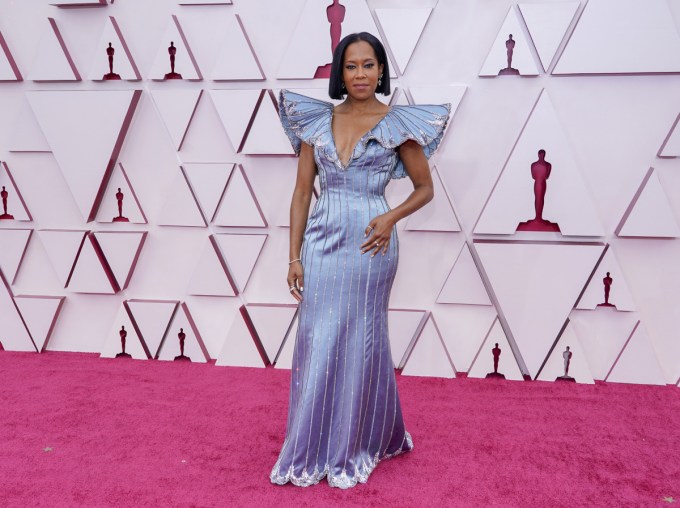 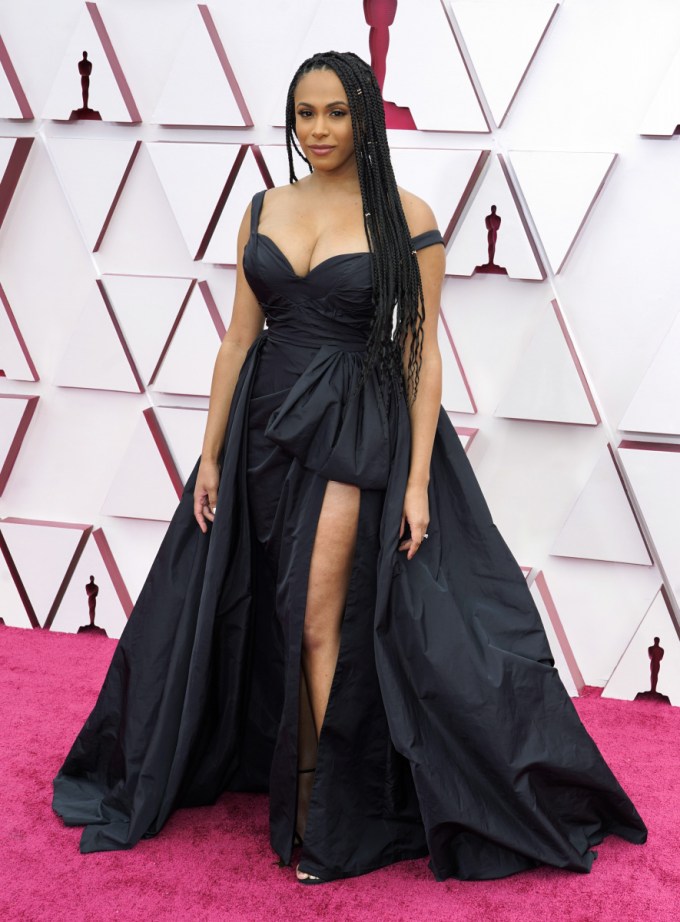 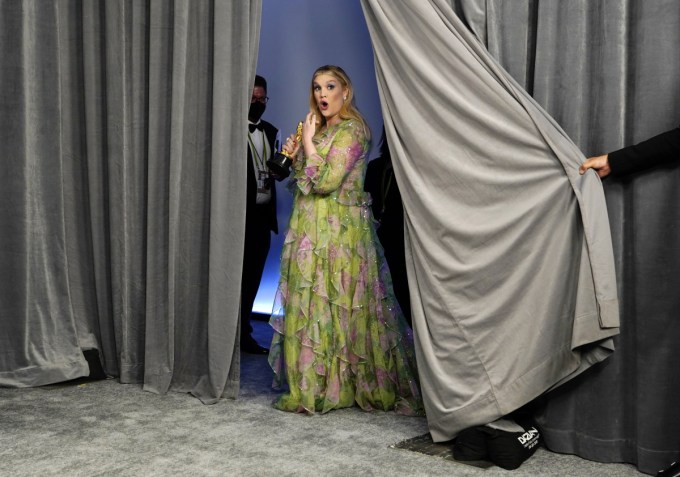 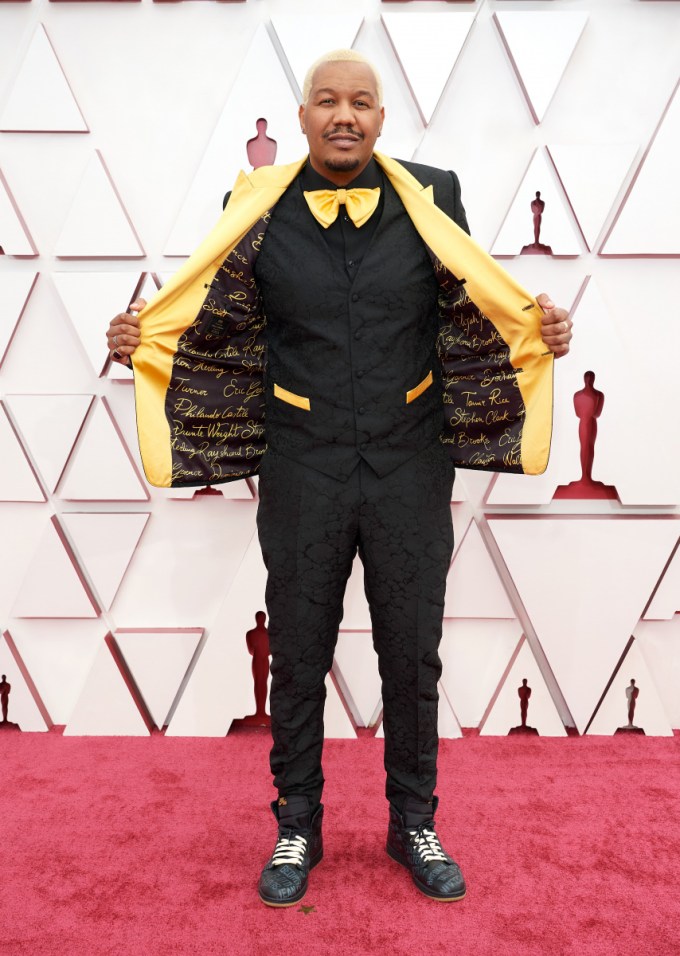 Travon Free made a statement with a suit and sneakers featuring the names of victims of police brutality. Photo: Getty 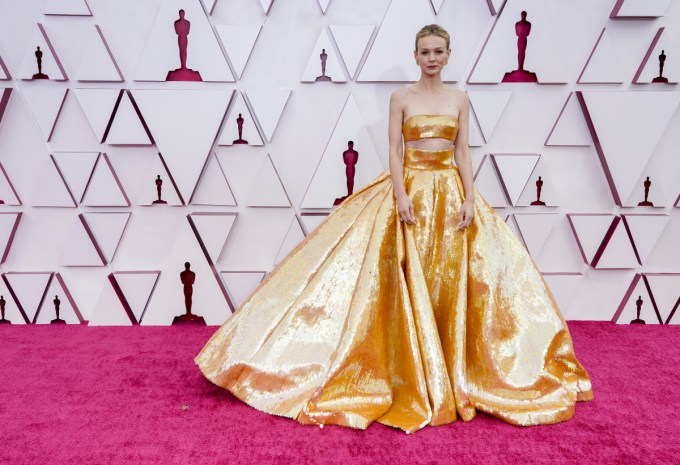 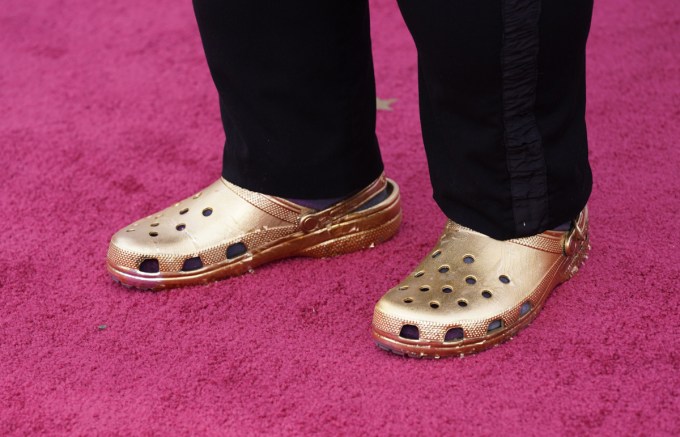 Questlove’s gold Crocs felt like an homage to spending a year at home. Photo: Getty 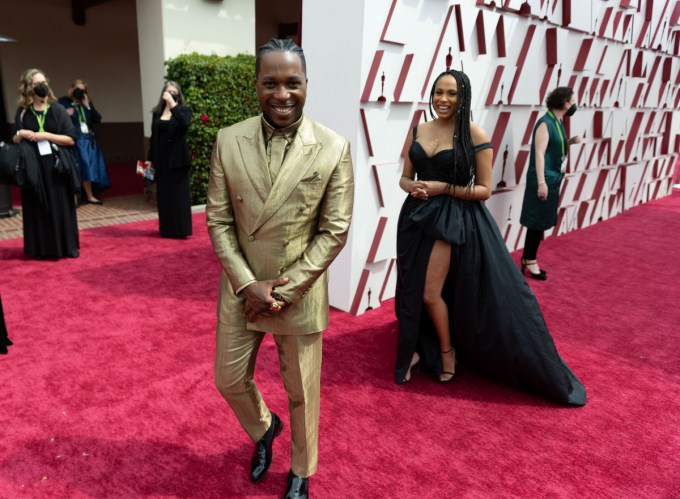 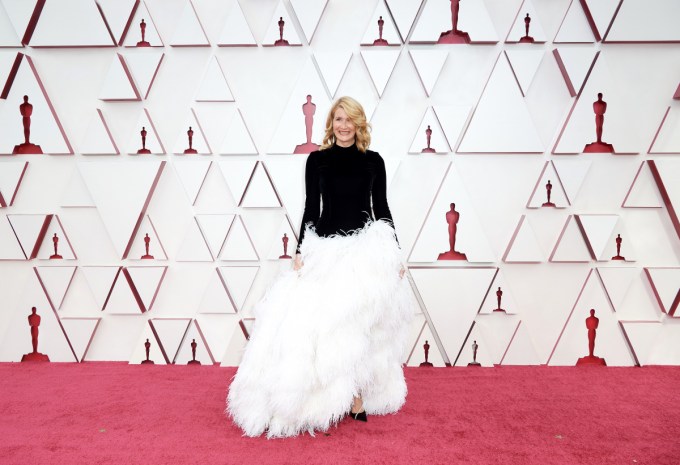 Laura Dern’s Oscar de la Renta gown was from a fairy tale ... Specifically, the feather duster from Beauty and the Beast. Photo: Getty 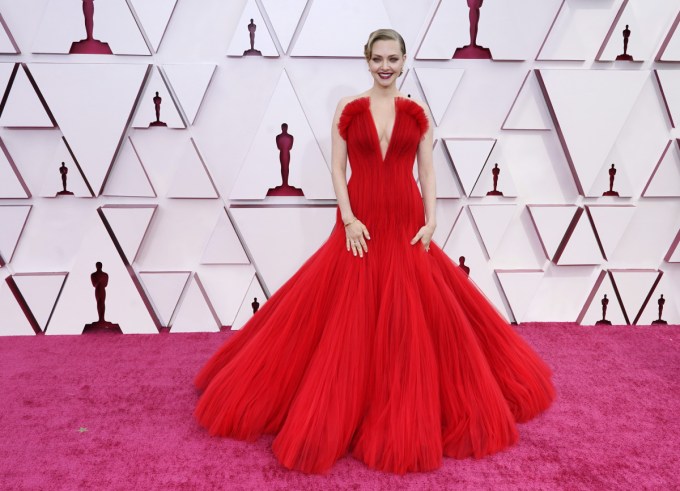 Amanda Seyfried wowed in a vibrant Armani gown designed by Giorgio Armani and inspired by the hibiscus flower. Photo: Getty

Apart from that, viewers were left with a bland, dull show that lacked the usual glitz, glamour and water-cooler moments the Oscars has delivered in the past.

The US television audience for the Academy Awards dropped to a record low of 9.85 million viewers on Walt Disney Co’s ABC, according to preliminary Nielsen data.

That represented a 58 per cent decline from last year’s final tally which showed 23.6 million people tuned in for the film industry’s highest honours.

As one of the first in-person awards shows in more than a year, one might expect some excitement and energy from the buzzing A-listers, but the over-produced event failed to deliver.

Frances McDormand’s touching wolf cry, and Glenn Close’s bouncing bottom were among the night’s only highlights.

The ceremony ended flatly, with the final award of the night going to Anthony Hopkins – who wasn’t even there to accept it.

Fans and critics alike have taken to social media to dish about the “snoozefest”, claiming it was the “most boring Oscars” ever.

It seems the Academy has its work cut out if it intends to recapture viewers next year.

As we ponder just what that might look like (suggestion: rehire Neil Patrick Harris), it’s worth looking back on some of the more scandalous and jaw-dropping moments of Oscars past.

One of Old Hollywood’s leading men, Marlon Brando, controversially rejected his award for best actor in 1973 for The Godfather.

Brando didn’t even attend the ceremony, but instead unexpectedly sent Native American actor and activist Sacheen Littlefeather on his behalf.

“And he has asked me to tell you … that he very regretfully cannot accept this very generous award, the reasons for this being the treatment of American Indians today by the film industry.”

Met with a combination of booing and applause, Littlefeather later revealed that “John Wayne was in the wings, ready to have me taken off stage”.

The year was 2000: American Beauty was the movie du jour (long before Kevin Spacey got cancelled), and your eyebrows were plucked to within an inch of their lives.

Angelina Jolie, who had yet to shack up with Brad Pitt and was still considered a bit of a weirdo, was up for (and won) best supporting actress for Girl, Interrupted.

In all her vampy glory, Jolie made headlines for sharing a very uncomfortable (and slightly incestuous) kiss with her brother James Haven on the red carpet.

She followed up by declaring her love for Haven in her acceptance speech.

“I’m in shock and I’m so in love with my brother right now … he just held me and said that he loves me and I know that he’s so happy for me.”

Nominated for best original song I’ve Seen It All, in 2001, Icelandic singer Björk caused a stir when she turned up wearing a flamboyant swan dress.

The costume-like gown was created by Marjan Pejoski, who later told The Hollywood Reporter that “without people like her, it would be boring”.

To cap off the ostentatious gown, the singer theatrically laid an egg on the red carpet.

Italian actor and director Roberto Benigni was so thrilled to win best international feature film in 1999 that he literally leapt across the room.

As Sophia Loren excitedly called out “Roberto!”, the room erupted with applause.

Benigni, whose Italian holocaust dramedy Life Is Beautiful took home three awards including best original score and best actor, climbed up onto the chairs (assisted by Steven Spielberg), and then bunny-hopped his way to the stage.

Bursting with pure joy, we could only hope to see another Oscars winner as animated as Benigni.

Actor David Niven was in the middle of introducing Elizabeth Taylor when he was joined on stage in 1974 by a surprising and uninvited guest.

Gay rights activist Robert Opel, a photographer and art gallery owner, made history when he ran across the stage in the nude.

Niven nonchalantly remarked it was “fascinating to think that probably the only laugh that man will ever get in his life is by stripping off and showing his shortcomings”.

But Opel wasn’t tackled, arrested or even thrown out of the ceremony.

Instead, Oscars producers let him have a press conference.

“People shouldn’t be ashamed of being nude in public. Besides, it is a hell of a way to launch a career,” Opel said.

The Oscars’ business manager, Robert Metzler, later said he believed the stunt had been planned by producers.

He said Niven had asked Metzler’s wife to borrow a pen so he could write down his famous line during the dress rehearsal.

If only the Oscars producers of today were half as daring as their 1970s predecessors.